CT Classic looks to be a riders’ race

A glimpse at the entries for the Grade II, $1.5 million Charles Town Classic on Saturday night not only reveals a pair of prior, multiple Grade I winners in Game On Dude and Ron The Greek, but also highlights two jockeys who have already been inducted into the National Racing Hall of Fame and a third rider who is among the finalists for that honor this year.

Mike Smith and Kent Desormeaux entered the Hall in 2003 and 2004, respectively, while Garret Gomez is among the 10 finalists for inclusion this year. 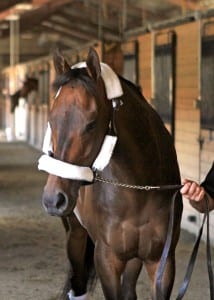 Hall of Famer Mike Smith will pilot Game on Dude in the Charles Town Classic. Photo by Coady Photography.

Smith, who will make his first appearance ever at Charles Town this weekend, will climb aboard 4-5 favorite Game On Dude in the Classic for trainer Bob Baffert.  Desormeaux has the call on longshot Isn’t He Perfect.  And Gomez, perhaps soon to join the others in the Saratoga, NY, shrine, will ride Clubhouse Ride in the Classic.

Smith, who has booted home more than 5,000 winners from 31,000 mounts in a career in which his rides have earned over $235 million, will get aboard two horses for Baffert on Saturday night.  He’ll also ride favored Book Review in the $200,000 Sugar Maple Stakes for fillies and mares that immediately precedes the Grade II event.  Smith has never ridden at Charles Town, but he has plenty of experience riding at “bullrings” during a career in which most remember him for victories at the bigger ovals.

Smith, who began riding at small tracks in New Mexico at age 11 and took out his jockey’s license at age 16 there before moving to Canterbury Downs in Minnesota, has ridden Game On Dude in each of his two wins this year and gladly accepted the mount again despite venturing to the three-quarter mile oval at Charles Town.

Smith has ridden the winners of all three Triple Crown races, guiding Drosselmeyer to an upset score in the 2010 Belmont Stakes, Giacomo to an absolute shocker in the 2005 Kentucky Derby and Praire Bayou to victory in the 1993 Preakness Stakes.  But his career has flourished in Breeders’ Cup races.  Smith has piloted home 17 Breeders’ Cup winners, including two aboard Zenyatta.  His first two came aboard Lure (1992-93), coincidentally also among the finalists for Hall of Fame induction this year.

His Classic mount also figures to be one of the stars of the show.  No stranger to major stakes victories, Game On Dude has won two of the last three editions of the Grade I Santa Anita Handicap and three other Grade I races for Baffert, and he is seeking to atone for a second-place finish behind Duke of Mischief in the 2011 edition of the Classic.  That renewal, perhaps the best of the four to date, also included Eclipse Award finalists Acclamation and Tizway.

Desormeaux, who has won nearly 5,500 races from 28,500 mounts in a career in which his rides have earned $245 million, has had considerably more success in the Triple Crown races than Smith, but has not fared nearly as well in the Breeders’ Cup events.  His chances of upsetting Smith and Game On Dude on Saturday evening atop Isn’t He Perfect (20-1), winless in four starts this year and unproven in Graded stakes company, appear remote at best.

Desormeaux has won the Kentucky Derby three times, winning  with Real Quiet (1998) and Big Brown (2008) who were both subsequently beaten in the Belmont Stakes in their bids to become the sport’s 12th Triple Crown winner.  A year after Big Brown pulled up on the far turn of his Belmont bid, Desormeaux won the Belmont aboard Summer Bird.

Surprisingly, Desormeaux has won only four Breeders Cup races in his Hall of Fame career.  He steered Kotashaan to victory in the 1993 Turf, which propelled that runner to an Eclipse Award as horse of the year.  Three years ago he won aboard Unrivalled Belle, his most recent Breeders Cup triumph. In 1989, while riding primarily in Maryland, Desormeaux booted home a record 597 winners.

Gomez, who has won nearly 3,750 races from 21,000 mounts who have earned just over $200 million, will get a leg up aboard Clubhouse Ride from trainer Craig Lewis. Gomez has yet to win a Triple Crown race but who led jockeys nationally in earnings four straight years [2006-09].  He is among this year’s 10 Hall of Fame finalists along with fellow riders Calvin Borel, Craig Perret, Alex Solis and the late Chris Antley.

Gomez, who has won 13 Breeders’ Cup races in his career, including four in 2008 and three more in 2010, is hoping to reverse the recent fortunes of Clubhouse Ride, who has been second in all three of his starts this year, the last two behind Game On Dude.  Gomez will then await the results of this year’s Hall of Fame voting, which includes several fellow jockeys, trainer Gary Jones and horses Ashado, Housebuster, Invasor and Lure.

Meanwhile, multiple Grade I winner Ron the Greek, trained by Hall of Famer Bill Mott, will have the services of rider Jose Lezcano, who’s won two Breeders’ Cup races in his young career.  And defending champ Caixa Eletronica (6-1), one of three Todd Pletcher trainees in the races, will carry Javier Castellano, who’s leading the nation in mount earnings, according to the Jockeys’ Guild.

According to Erich Zimny, Vice President of Racing Operations for the West Virginia track, it’s all part of the plan.  [pullquote]To see how those fans respond and how excited they get when they see those nationally known riders up close is one of the most rewarding parts of our event days.”[/pullquote]

“We look to attract the horses first and foremost because they typically bring with them the types of trainers and riders people really want to see,” he said.  “At a smaller venue like ours, the interaction with the fans can be more personal in a way and all of the jockeys who have come to ride here have been great and receptive to it. ”

“There are a lot of racing fans in our area, but they’re used to seeing a Mike Smith or Javier Castellano on television and not at their home track.  To see how those fans respond and how excited they get when they see those nationally known riders up close is one of the most rewarding parts of our event days.”