As he has been in every poll of 2021, Knicks Go tops the list. The Paynter horse posted a dominant win in the Grade 1 Breeders’ Cup Classic at Del Mar to cap a season in which he won three Grade 1 races and five races overall.

Bred by Angie Moore, Knicks Go, the near-certain national Horse of the Year, has now won more than $8.6 million. He’s being pointed to one final start, in the Grade 1 Pegasus World Cup at Gulfstream Park, before moving on to stallion duty. He’s trained by Brad Cox for Korea Racing Authority.

Aloha West, ninth in the November poll prior to the Breeders’ Cup, jumped up to second after he was up in time to win the Grade 1 Breeders’ Cup Sprint. A four-year-old colt by Hard Spun, Aloha West has won five races and more than $1.3 million in this, his first season of racing.

He was bred in Maryland by Katy Voss and the late Bobby Manfuso and is one of two horses in the top 10 that they bred. He’s trained by Wayne Catalano for Eclipse Thoroughbred Partners.

With the ascension of Aloha West, Chub Wagon, second a month ago, dropped to third. Idle since a win in the Sept. 25 Plum Pretty Stakes, Chub Wagon will finish the season with eight wins from nine starts and earnings of $487,400. She’s a homebred for George Chestnut and Joe-Dan Farm and is trained by Guadalupe Preciado.

In fourth on the list, and appearing for the first time this year, is the four-year-old Maryland-bred Field Pass. The Lemon Drop Kid colt notched his second graded stakes win this year – and the fifth of his career – in the Grade 2 Seabiscuit Handicap at Del Mar Nov. 27. He’s trained by Mike Maker for Three Diamonds Farm and was bred by Mark Brown Grier.

Dropping from third last month to round out the top five is the Pennsylvania-bred Beren. A three-year-old colt by Weigelia, Beren most recently was a very good second in the Steel Valley Sprint at Mahoning Valley Race Course. Trained by Butch Reid for St. Omer’s Farm and Chris Feifarek, Beren has won seven of 12 starts while earning $469,790 this season.

The top 10 are rounded out by Jaxon Traveler, Caravel, Chess Chief, Hello Beautiful, and Cordmaker.

Of the top 10, six were bred in Maryland, with three bred in Pennsylvania. One, Chess Chief, was bred in Virginia. Seven of the top 10 were males, and three were females.

The poll is conducted of media members and others involved in the Thoroughbred industry and restricted to horses that have run in 2021 and were bred in Pennsylvania, Maryland, Virginia, West Virginia, New Jersey, Delaware, and the Carolinas. 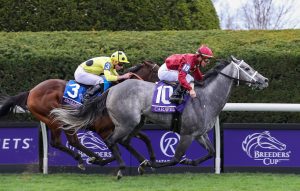 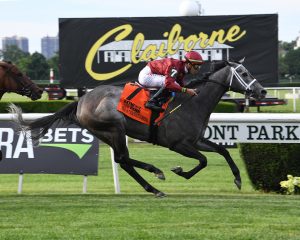 Two horses polling well in the Mid-Atlantic Thoroughbred/The Racing Biz Top Midlantic-bred Poll are among those entered in the Breeders’ Cup.

In the first Top Midlantic-bred Poll of the year combining horses of all ages, Just One Time maintained her lead, while newcomers made an impact. 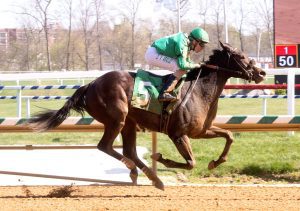 With neither having raced since the prior Top Midlantic-bred Poll, three-year-old Luna Belle and Just One Time remained atop the tables. 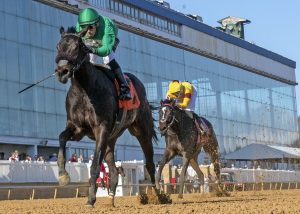 In the first Top Midlantic-bred Poll of 2022, Grade 1 winner Just One Time is tops among older horses while Luna Belle, undefeated this year, leads 3yos.