The Maryland Jockey Club will not race December 3-5 as state racing stakeholders scramble to put the brakes on a sudden cluster of equine fatalities.

“While racing is suspended, the Maryland Thoroughbred Horsemen’s Association and the Maryland Jockey Club are working with industry experts to analyze surface composition and maintenance procedures directed at the safest possible racing surface,” the groups said in a statement, adding, “The Maryland racing industry remains laser focused on this problem and collectively pledges to do whatever is necessary to ensure that Maryland’s historic racing industry remains world-class.”

Seven horses have perished as a result of fractures sustained during races or in morning training on the newly renovated Laurel Park dirt surface in a cluster that began November 6, and an eighth collapsed while galloping and died as a result of what the Maryland Racing Commission report calls “sudden death.”

The decision not to race this weekend was among the recommendations made by John Passero, the former longtime MJC track superintendent.

“I said, the best thing I think can happen is, I wouldn’t race Friday, Saturday, or Sunday,” Passero said. “Give yourself some time to get everything straightened out.”

The unexpected cluster of deaths, coming just a couple of months after Laurel’s newly renovated dirt course reopened, set off alarm bells within the industry and caused a flurry of meetings to take place over this past weekend and into this week. 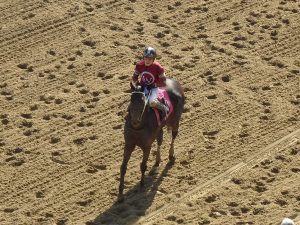 The MJC announced in a text message to horsemen Friday, November 26 that the track would close for “track maintenance” on Monday, Nov. 29. But the company went forward with racing over the weekend, a decision that caused some head-scratching among horsemen. Two horses, one during a race and one in training, suffered fatal fractures following the announcement.

Thus far this week, only light training has been permitted at Laurel, with the interior portion of the track closed.

The problems spurred the Maryland Thoroughbred Horsemen’s Association to seek Passero’s assistance. Passero, who left the Maryland Jockey Club in 2004, is held in high regard by local horsemen for his work here.

“They wondered if there was something going on with the track, so they just called me in to have a look,” Passero said.

Passero said he found the trouble to be the materials that form the cushion of the track.

“Right now, it’s just the cushion,” he said. “The cushion lacks body, and they were smacking on the bottom [base of the track].”

That “smacking” – literally, horses hitting the base of the track – would account for the prevalence of fractures. It also would account for what some veterinarians have said is an unusual number of non-fatal injuries.

Passero said that while there may have been some issues with maintenance, the larger concern was with “the makeup of the cushion.”

“You need sort of a different blend [of material] you could call it,” he said. “I haven’t gotten super-into it yet, but certainly I’ve been up to the sandpit, and I’ve been driving around, talking to horsemen at the track.”

It’s not the first time Passero has been called back by the state’s horsemen to give his analysis of the Laurel dirt track. Back in 2017, the MTHA retained him to do similar work, and he issued a fairly scathing report, citing unevenness of the cushion and what he called the “haphazard manner” in which repairs had been undertaken.

The longstanding troubles with the Laurel dirt surface ultimately prompted the MJC in April to close the track and undertake an extensive renovation project. Initial reports on the new surface were positive, and only one horse suffered a fatal fracture racing or training in September and October.

But then November arrived, and while the weather in Maryland has mostly been relatively mild and dry, the track problems reared their head once again.

Overuse certainly does not seem to have been an issue with the horses who suffered fatal injuries. Five of the seven in the recent cluster had made four or fewer career starts prior to their injuries, and none of the group had made even 20 starts.

In fact, three of the seven were two-year-olds, including Golden Sky, an unraced Jose Corrales trainee injured during what was just the second breeze of his life.

Another of the recent fatalities was Moquist, a three-year-old filly trained by Dale Capuano. She was four-for-four in her brief career and would have made her next start in a stake.