Raoul Middleman, the Baltimore artist who created the seven large murals that grace the second floor of Pimlico’s grandstand, passed away October 29. He was 86.

The Baltimore Sun reported his death.

The internationally renowned Middleman painted in an energetically expressionistic style that he himself dubbed as “impatientist.” His art is included in the collections of some of the nation’s top art museums, and he won numerous awards for his painting.

Middleman, a Baltimore native, taught at the Maryland Institute College of Art (MICA) for some 56 years, joining the faculty in the early 1960s and continuing to teach until 2019, when he was 84.

In the mid-1970s, Middleman was commissioned by Rosalee Davison, the daughter of Pimlico’s then-owner Ben Cohen, to paint some murals to liven up the facility. She’d originally suggested locating them in the infield tunnel, but Middleman demurred, calling the proposed location “too vulnerable.”

Instead, they agreed on a location in the second-floor grandstand, above the betting windows. They’ve been there ever since.

Middleman’s distinctive vision of the racetrack, played out in the seven expansive murals, came from first-hand knowledge. He spent a great deal of time at Pimlico as a youngster and even worked for trainer Jimmy Hector as a teenager. 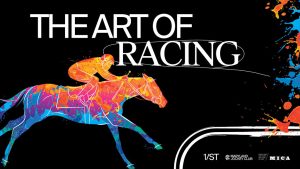 The Preakness “Art of Racing” contest will return this year, as 1/ST Racing, the Maryland Institute College of Art, and Park Heights team up.

“For a suburban Jewish kid, it was an escape,” Middleman told Baltimore Magazine in 2015. “I had this whole other life at the stables, grooming horses and shoveling shit.”

Those experiences with horses stayed with him the rest of his life. Indeed, in the 2015 Baltimore Magazine profile, he likened painting to handling horses.

“You always need to have good hands on a horse,” he said then. “If you pull too hard, you deaden the mouth, and they can get away from you. If you give them too much rein, they take over, and you aren’t in charge.

“It’s the same thing with painting. You need to have a good hand on the brush, where you assert yourself, but you’re also resilient to the will of the paint. You have to go with it, but not encumber the creative act.”

The Pimlico murals are perhaps the most conspicuous evidence of his connection to horses and to the racetrack.

Middleman enlisted his students in the project, which one of them later called “a challenge in really good, important ways.” The project to paint and hang them took place over seven years, the last of them, called “The Auction,” completed in 1982.

During the first half of the year, the class would visit the racetrack frequently to learn about the subject matter. Then they would move to creating the work, with Middleman drawing each mural in small scale and his students transforming the work into the murals familiar now to generations of Pimlico visitors.

The seven murals encompass a kind of Thoroughbred world in miniature, ranging from “The Auction” to “Starting Gate” to “The Preakness.” Each took a year to create.

They are a riot of color and motion, with Thoroughbreds seeming almost ready to take off, their handlers hanging on for dear life.

At the same time they are a product of Middleman’s own Runyonesque vision of the racetrack as a place of both what he called “high style” and raffish charm. “I love the track. I love the people,” Middleman said in 2019. “It was a world where rich and poor collide.”

Middleman called his Pimlico murals “some of the best things that ever came out of my imagination.” Given how prolific he was, and the high regard in which his work is held, that’s quite a statement.

“It was a personal thing for me since a lot of my teenage life was spent around horses,” Middleman said. “The murals are unique. They’re a little idiosyncratic to racing. I wanted the perspectives to jump around, so you see a multitude of shots into the energy of the racetrack. They have the flavor of racing.”

Middleman is survived by his wife Ruth and sons Ben, Nathaniel, and Raphael, as well as five grandchildren. Services are being planned.