Call it a good week for Catherine Jennings.

Jennings has five broodmares on her Charles Town farm, she said Saturday. One of those, Miss Henny Penny, made quite a splash this week.

Perhaps not. But they may be happening for the next couple of years, anyway. On Monday Miss Henny Penny’s yearling colt by Tapwrit sold for $82,000 at the Fasig-Tipton Midlantic fall yearling sale; that was the highest sales price of the eight West Virginia-breds to sell at that event.

Then on Saturday her two-year-old filly by Cupid, The Sky Is Falling, and her three-year-old filly by Speightster, Door Buster, both won West Virginia Breeders’ Classics races. That made her the only broodmare to see two of her offspring win WVBC events this year.

A yearling, two-year-old, and three-year-old with promise? That’s a pretty good spot to be. And there are more on the way.

Miss Henny Penny is a homebred daughter of Half Ours for Jennings. She won three races in her career and earned a stakes placing in the 2012 West Virginia Division of Tourism Breeders’ Classic.

“I’m the breeder of her,” Jennings explained. “We sold her as a yearling [for $62,000], and then we bought her back when her racing career was over.”

That’s turned out to be a prescient decision. With Jennings and Kentucky-based Scott Mallory partnering on Miss Henny Penny, she’s thrown nothing but winners, including now two stakes winners.

And her increased success has meant increased sales. The $82,000 that Jeff Runco, as agent for David Raim, spent to obtain the Tapwrit yearling marked a new high-water mark in her sales career. Trainer Runco and owner Raim also are the team behind The Sky Is Falling.

“What I do like about her,” trainer Ollie Figgins said of Door Buster, “is you’re sitting there with a lot of horses around, and when the opportunity comes and you ask her to go, she does respond right away and get herself right through there. Then you’re OK.”

When The Sky Is Falling went through Keeneland’s January 2020 mixed sale, she fetched a top bid of $40,000 from Pat Macieriello. That would have sent her to California to race.

Runco had bid unsuccessfully on the horse for one of his clients, but when the sale went down, Raim contacted him.

A couple of frantic days — complicated by the arrival of Covid-19 and its impact on business — later, Raim had bought the then-yearling for $60,000. The Sky Is Falling has won two of three in her young career after Saturday’s win in the Triple Crown Nutrition Breeders’ Classic. And now Raim’s got the half-brother, for $82,000.

“He’s a beautiful, beautiful colt,” Jennings said of Raim’s yearling buy. “I think they’re going to be really happy with him. I hope he lives up to these girls.”

Raim’s purchase is good news for Jennings, and not just from a financial standpoint. It means that the yearling colt will race in her backyard.

“We’re very small, and, you know, we always want to make sure that they end up in good places,” she explained. “So, we’re very careful about that.”

The two WVBC wins Saturday revealed something else about Miss Henny Penny’s offspring: they know how to win races. Must be in the blood.

“She has a very good family,” Jennings said. “It’s not a huge stakes family, but it’s just a running family. She’s just been so consistent, and she produces really good physicals — and they’re racehorses.” 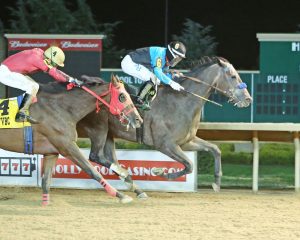 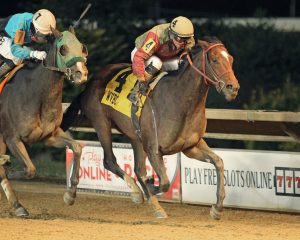 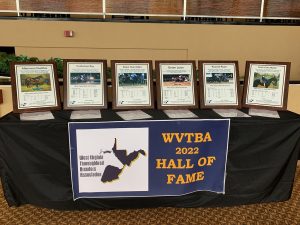 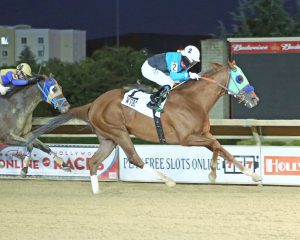 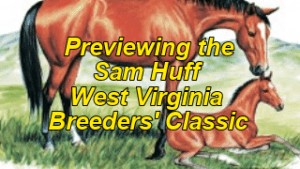