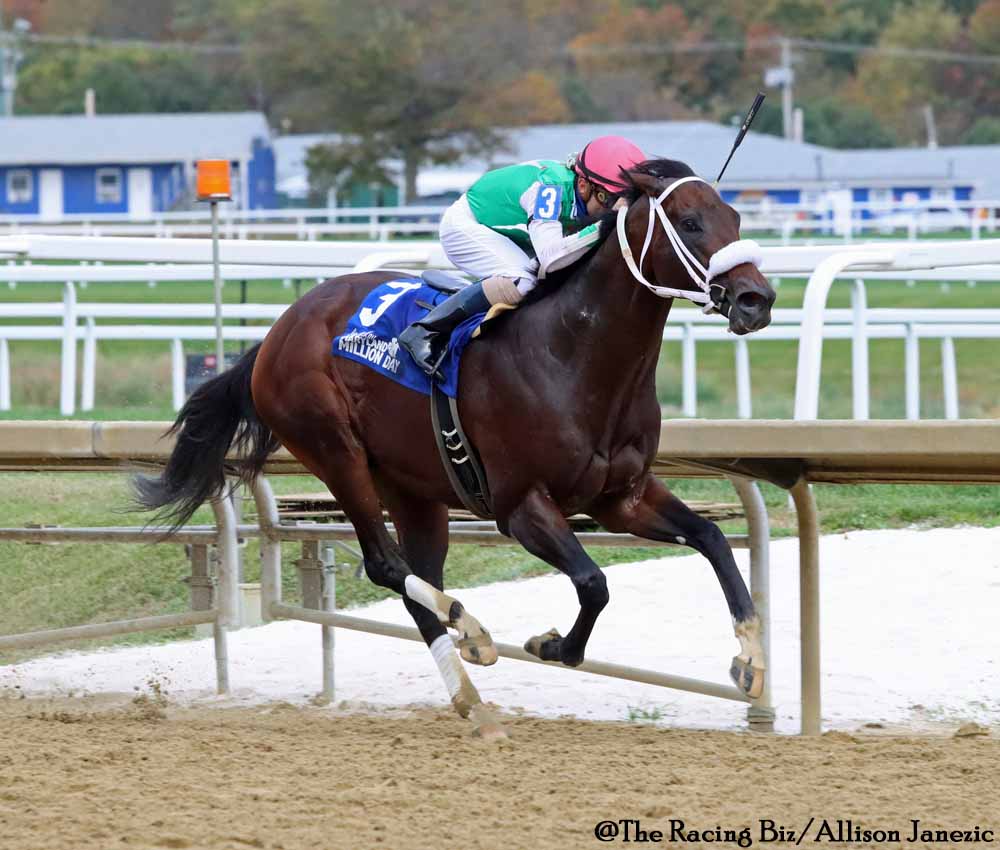 The Maryland Million Classic was won in record time, three Mid-Atlantic states have seen an increase in the reported number of mares bred for 2020, and an exciting stallion prospect will make his way to the state of Pennsylvania for 2021.

Monday Morning Qb stole the show in the 1 1/8-mile Maryland Million Classic on Saturday. With jockey Sheldon Russell in the irons, the bay colt raced near the pace after recovering from a slight stumble as he exited the starting gate. Prendimi flashed early speed up front, but it did not take long for Monday Morning Qb to take command and put the leader away. Entering the far turn, Monday Morning Qb was the one to catch and proved elusive as he glided his way to the wire with a comfortable lead. He completed the nine furlongs in 1:48.13, making it the fastest edition of the Maryland Million Classic since the race was moved to the distance of 1 1/8-miles in 2009.

Not only did Monday Morning Qb set a record time in the Maryland Million Classic, but he also stamped himself as only the second three-year-old to claim victory in the history of the event. The first to do so was Bonus Points in 2017.

Bred by Bowman & Higgins Stable and Cary Frommer, Monday Morning Qb is an Imagining colt owned by Cash is King LLC and LC Racing LLC and is trained by Butch Reid. To date, the Maryland-bred has won three of his seven attempts and has banked current career earnings of $225,155.

The Jockey Club released statistics for Report of Mares Bred for the 2020 breeding season, with numbers being received and documented through October 18, 2020.

True to tradition, Kentucky led the way with more mares bred than any other state with 16,391 mares reported as bred. That was off 4.3% from 2019.

However, there was some positive news for the Mid-Atlantic side of things.

While some states found a decrease in the number of mares bred for 2020, Pennsylvania, Maryland, and West Virginia all reported increases over 2019.

Pennsylvania has reported 734 mares bred, which is a 7% increase from 2019. Maryland reported 806 mares bred, an increase of mares bred by 3.3% over a year ago.

According to The Jockey Club, there have been a total amount of 27,970 mares currently reported as bred in North America this year. That’s down from more than 29,000 during the same period of 2019. The Jockey Club believes that there will be around 2,500-3,500 additional mares added to the list for North America before 2020 draws to an end.

There will be a new stallion prospect coming to the Mid-Atlantic region for the 2021 breeding season, as it was recently announced that multiple graded stakes winner and millionaire Wicked Strong will stand at stud at Pin Oak Lane Farm in New Freedom, Pa.

A winner of three races from nineteen starts, Wicked Strong is best known for his riveting scores in the Grade 1 Wood Memorial and Grade 2 Jim Dandy Stakes back in 2014. The bay son of Hard Spun first entered stud at Spendthrift Farm in Lexington, Ky in 2016, and has since been represented by multiple winners, including Evil Lyn, who recently won the Hilltop Stakes at Pimlico Racecourse on October 3.

In 2019, Wicked Strong was one of the top-10 freshman sires by progeny earnings and was ranked second by number of winners with a total of 26 at the time. Intriguing and classic names can be traced throughout the family tree of Wicked Strong, such as Kentucky Derby and Preakness winner Charismatic, Grade 1 winner and millionaire Student Council, Preakness winner Summer Squall, and the legendary Northern Dancer to name a few.

For 2021, Wicked Strong will stand for a fee of $3,500 which will be due once the resulting foal stands and nurses.