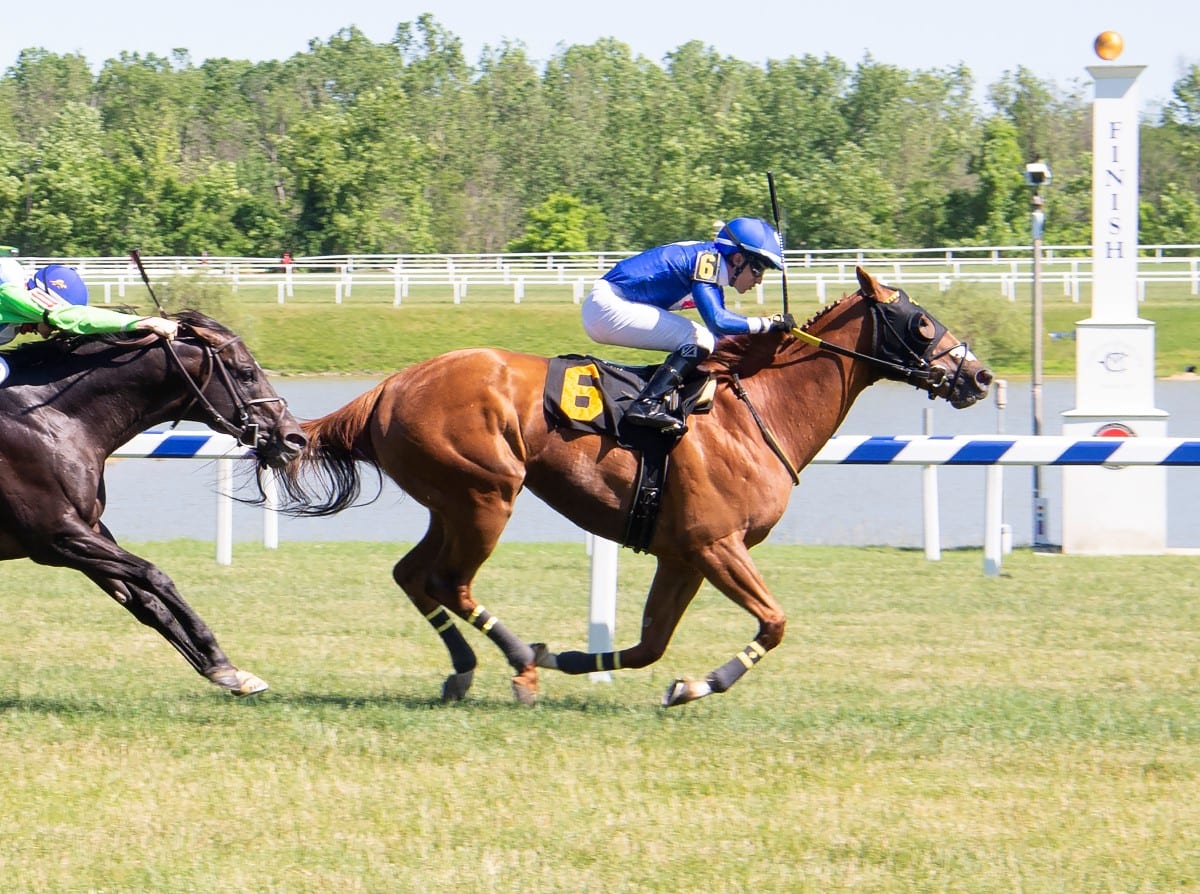 Left alone to set brisk but comfortable fractions by his standards, Raj Jagnanan’s 8-year-old stakes winner American Sailor cruised to his 14th career victory and first in nearly a year with a front-running one-length triumph Monday at Laurel Park.

Ridden by Jevian Toledo for trainer Wayne Potts, American Sailor ($9.80) bested five other stakes winners in the stakes-quality third-level optional claiming allowance for 3-year-olds and up, sprinting 5 ½ furlongs in 1:03.53 over a firm Exceller turf course.

Tricks to Doo, like American Sailor a stakes winner making his first start of the year, was unable to make up enough ground after chasing early and held on for second, a neck ahead of Love You Much and a troubled Completed Pass, who dead-heated for third. It was two lengths back to multiple graded-stakes winner Isotherm in fourth.

Breaking sharply from Post 6 in the field of 10, American Sailor – making his first start in 7 ½ months – launched himself quickly to the lead and opened up on his rivals by as many as five lengths through fractions of 22.74 and 45.65 seconds. Tricks to Doo, who hadn’t raced since last July, led a second flight that saw several horses changing position behind him.

Toledo had American Sailor still firmly in command once straightened for home and powered toward the wire, going five furlongs in 57.28 seconds as 5-2 favorite Tricks to Doo and jockey Trevoer McCarthy attempted to reel them in but ran out of room. Love You Much, who had moved up to a challenging position around the turn, was unable to hold off a dramatic rally by Completed Pass, who was left at the gate and spotted his rivals too much real estate.

Oldies But Goodies, Regally Irish, Jammer, Dupree and Duncastle completed the order of finish. Scratched were Powell and main-track-only entrant Threes Over Deuces.

American Sailor, a gelded son of multiple Grade 1 winner City Zip out of the Yes It’s True mare Yesshesarocket, now owns a record of 14-8-3 through 43 starts, boosting his career bankroll to $443,264. He tuned up for his return with a string of five consecutive bullet works over Laurel’s main track.

“In the morning, we’ve had him geared down. [Maryland Jockey Club outrider and ex-jockey] Kaymarie Kreidel, she gallops him for me and she’s done a great job. [Jockey] Tais Lyapustina, she’s breezed him several times for me,” Potts said. “He’s gone 58, 59 [seconds] and done it just easy, in hand. I know it’s on the dirt; he never got the opportunity to breeze on the grass, but we knew we were sitting on go, it was just if I had him fit enough.”

The victory was his fourth in six career tries over Laurel’s world-class turf course, including back-to-back starts last summer. He earned his lone career stakes win in the 2016 Bucharest Turf Sprint at Sam Houston and has placed in five other stakes, running second in the same race in 2018 and 2019.

“That’s my boy. The horse has done a lot for me, man. From where I got him to where he is today,” Potts said. “I finally talked my owner into letting me give the horse a break this year. We always usually try to go to Sam Houston for the sprint, and I opted against it this year. I just wanted to kick him out and let him have some turnout. He’s never had a break in the three years I’ve had him. He came back and that’s the best thing that happened for him.”