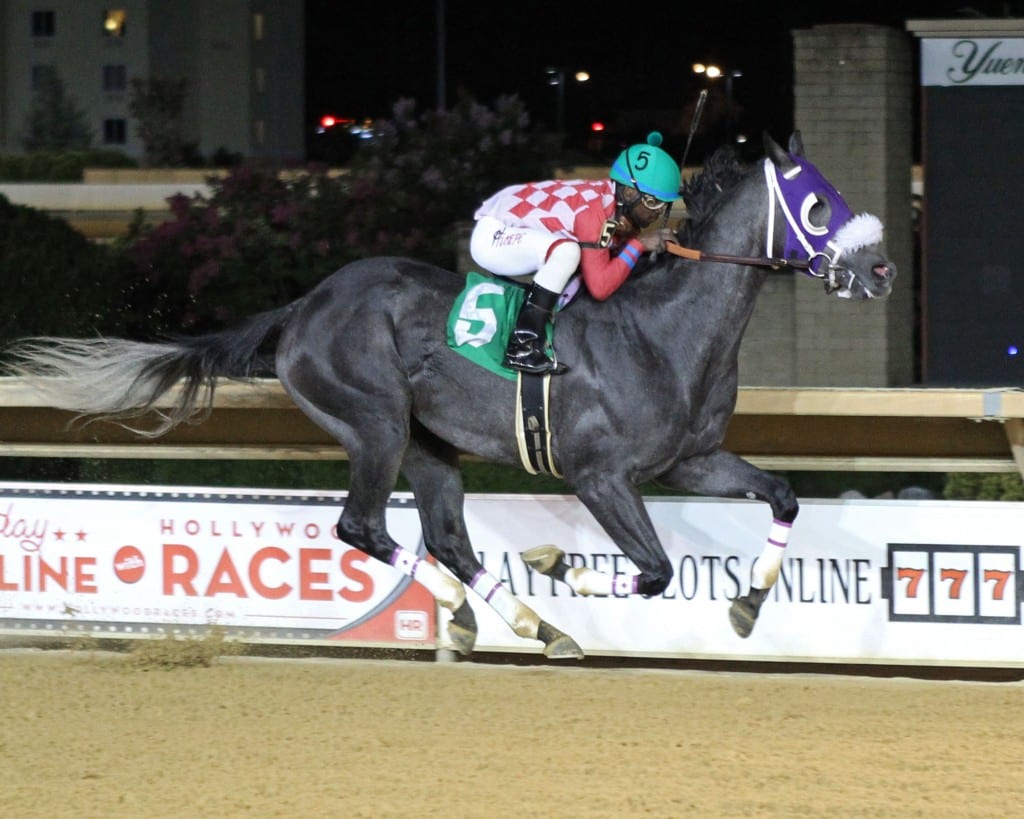 If trainer Crystal Pickett doesn’t win Saturday’s $50,000, 4 1/2-furlong It’s Only Money Stakes for older West Virginia-breds, it won’t be for lack of trying. Pickett appears to be holding all the cards with a solid three-ply entry headlined by Dr. Feelgood (6-5), the current king of the one-turn dash events over the strip.

Dr. Feelgood, a five-year-old Fiber Sonde gelding, romped home in 50.69 in his seasonal debut against allowance foes last month and sports nine wins in 11 career outings, including both the Last Enchantment and West Virginia Dash For Cash Breeders Classic.

“He came out of that allowance race great and he’s ready to run another big race on Saturday,” Pickett said. “He’s really a special horse. Everyone at the barn loves him. He loves mints and he gets most of the seven-pound bag I get at the store. A happy horse is usually a winning horse. He’s been doing great since that allowance race and I think he’s sitting on another big race this weekend.”

Darius Thorpe has the mount.

Pickett will also send out her talented three-year-old Hypothesis, second in the Coin Collector behind Bright Dawn in his sophomore debut last month, and Indian Sound, who makes his stakes debut in the It’s Only Money.

Hypothesis is no stranger to stakes, having won both the Henry Mercer and Vincent Moscarelli Memorial here last season en route to being named champion West Virginia-bred two-year-old male. He had earlier been fourth in the Rosie’s Stakes at Colonial Downs, a race won by Futurity and Breeders Cup Juvenile Turf Sprint hero Four Wheel Drive. Gerald Almodovar is named.

Aaron’s Tap (5-2), runner-up behind Dr. Feelgood in both the Last Enchantment and the West Virginia Dash For Cash BC, has won once in three starts this year and owns a 14-4-4 slate and nearly $325,000 banked from 28 career tries for trainer Jeff Runco and owner Smart Angle LLC. Aaron’s Tap won the 2018 edition of the Last Enchantment for his lone stakes win.

Trainer Javier Contreras will send out Last Print (3-1), a five-year-old Fiber Sonde gelding that he owns, bred and trains. Hero of the Gold Watch overnight stakes in his seasonal debut in February, Last Print owns an 8-3-3 slate and just over $160,000 banked from 15 career outings.

Freedom Is Ringing (15-1), a winner twice in three starts this year for trainer Rhea Pennella and Fibertown (20-1), a winner once in nine lifetime tries for trainer Gerald Coker, Jr., complete the field for the It’s Only Money Stakes, the second race on the nine-race program on Saturday. Post time for the card is 7:00 p.m.

NOTES The It’s Only Money is  named for the Tim Grams trainee of the late 1990s. He captured the inaugural running of the $100,000 Charles Town Dash on July 4, 1999 in :50.36, which represented the all-age track record for the one-turn distance at the time. Oddly enough, Grams, who has five entered on Friday, does not have a single horse entered on Saturday…