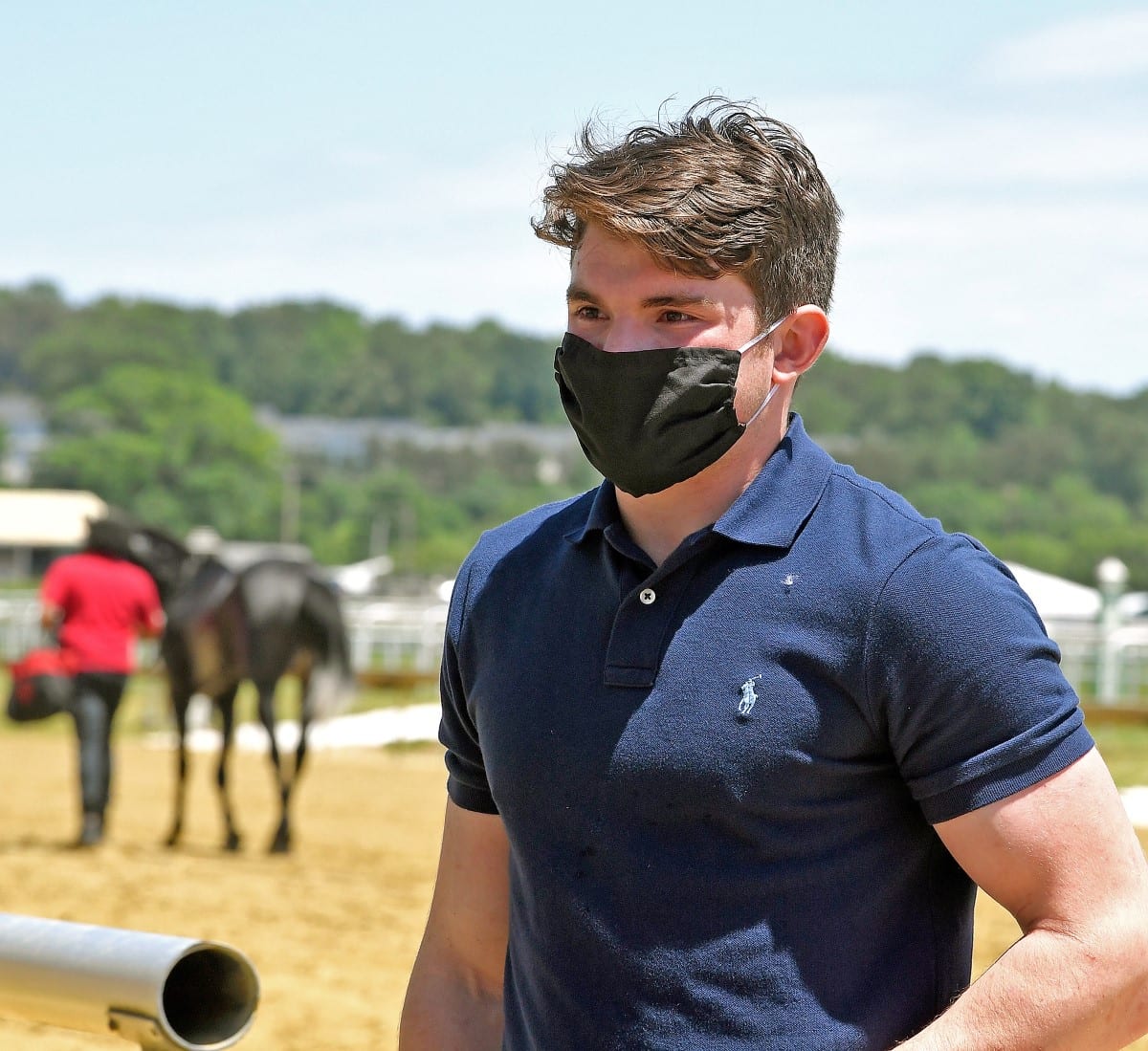 Young trainer Anthony Lynch after Queen of Cause prevailed at Laurel Park to give him his first victory. Photo by Jim McCue, Maryland Jockey Club.

Frank Davino’s Queen of Cause came flying down the center of the track to catch pacesetter Stiva in deep stretch and edge clear in the second race at Laurel Park Saturday, giving trainer Anthony Lynch his first career victory.

Queen of Cause ($31.60) completed 1 1/16 miles in 1:41.56 over a firm All Along turf course in the waiver maiden claiming event for fillies and mares 3 and up. It was the first grass race of the season as live racing resumed in Maryland for the first time since March 15.

“It’s amazing. I want to cry so bad right now,” an emotional Lynch said. “I just have to thank everyone that’s ever been with me as a trainer and been with me since I was a little kid. It means a lot.”

Lynch, 18, is a son of Laurel-based trainer Cal Lynch who works for his father along with his older brother, Charlie. Queen of Cause made her first three starts last fall for Cal Lynch before being turned over to Anthony Lynch this year.

“His mom and I couldn’t be more proud,” Cal Lynch said. “We appreciate Frank and Joe [Davino] giving a young guy this opportunity.”

Anthony Lynch was fifth with his first career starter, Alphastest, Jan. 18 at Laurel. Queen of Cause, a 3-year-old daughter of Creative Cause, was his eighth runner.

Queen of Cause was bumped early and raced next-to-last in the field of 10 through a half-mile as Stiva posted fractions of 22.75 and 46.22 seconds. Jockey Jorge Ruiz swung Queen of Cause outside where she circled the field entering the stretch and set her sights on the leader, closing ground steadily to prevail by 1 ¼ lengths.

“I knew she was fit and I knew that she had trained very, very well coming into this race. I expected her to run very well and she proved it today,” Lynch said, unsure of how he would celebrate the milestone. “There’s not much to do with the quarantine, but we’ll find something.”