The whispers started a few years ago, when all of sudden trainer Jason Servis couldn’t lose. According to Equibase, his win percentage in 2015 was 21%; in 2016, it jumped to 27%. Then it was 29%, then 32%. Anyone who was paying even a little attention had to notice, and whispers became murmurs, then comments, then calls for action.

Jorge Navarro’s win percentage over the same time frame: 31%. You remember Navarro. He’s the guy who was videotaped at Monmouth Park in 2017, watching a simulcast race with one of his owners, exulting when a horse trained by his brother won.

“We f–k everyone,” Navarro said a bit later.

Widely seen as an implicit admission of cheating, the video resulted in a $5,000 fine for both Gindi and Navarro, who nevertheless kept training horses and kept winning races.

He’s won the last seven training titles at Monmouth; in each of the last three years (Equibase doesn’t publish statistics before 2017), Servis has been his runner-up.

And now both have been indicted by the federal government, along with 25 other people involved in racing, after FBI raids on their Florida barns on Monday morning. The illegal activities, and statements about illegal activities, outlined below are all alleged in the indictment; of course, Servis, Navarro, and others are all presumed innocent until proven guilty.

According to the indictment, veterinarians, drug producers, and racing staff conspired to falsify medication records and administer illegal substances to many of the horses in their care. Of X Y Jet, who won the 2019 Golden Shaheen (G1) and earned more than $3 million, Navarro said in an intercepted phone call that he had given XY Jet “50 injections” before the race in Dubai. The indictment reads in part, “JORGE NAVARRO…personally administered various adulterated and misbranded [performance-enhancing drugs] to XY Jet…”

Also indicted was trainer Michael Tannuzzo, who ran horses last weekend at Aqueduct and who worked with Navarro. In one conversation to which Tannuzzo was a party, harness trainer Nicholas Surick, also now under indictment, stated, “You know how many f—ing horses [Navarro] f—ing killed and broke down that I made…disappear…You know how much trouble he could get in…if they found out…the six horses we killed?”

Turns out, they did find out.

Not two weeks ago, the Servis-trained Maximum Security won the inaugural Saudi Cup, a race worth $10 million to the winner; trainers typically get 10-12 percent of the winning purse, which in Servis’ case could amount to more than $1 million. In 10 starts, the four-year-old has finished out of the money only once…and that was the day he crossed the wire first, in last year’s Kentucky Derby, and was disqualified to 17th. His lifetime earnings? $11.8 million.

Last June, after Maximum Security received a dose of one of the illegal substances, Servis was assured by veterinarian Kristian Rhein (also indicted) that no test for the substance existed in the U.S., and that it could sometimes be mistaken in a test for an overage of “dex” (likely dexamethasone, a legal medication that may not be used in a horse five days before a race).

Servis arranged for another veterinarian to falsify records to make it appear that Maximum Security had been administered “dex,” rather than the illegal substance.

In a March 2019 phone conversation, Servis and Navarro discussed the use of the substance, SGF-1000, with Servis telling Navarro that he’s “been using it on everything, almost,” and Navarro responding that he, too, has used it on several horses.

But then Navarro adds, “I don’t want to talk about this shit on the phone ok.”

Many questions remain, of course. What will happen to all that Saudi Cup purse money? Or the Dubai purse money? Or Maximum Security’s Eclipse Award? Or all the horses trained by Servis and Navarro?

What might Servis and Navarro and the vets know that would be useful to further investigations? Are other indictments in the pipeline? I’ve watched way too many episodes of Law & Order not to wonder about the prospect of plea bargains and flipping.

And then there are the owners. What about them? They had to know – or should have known — right? They gave their horses to Navarro and Servis for a reason, right?

As with so many other issues in horse racing, the bottom line is the owners. They wield wealth and with it power; they can make or break trainers…and vice versa.

I hope that they make the choice to do the right thing, to look beyond big purses and winner’s circle photos to the welfare of their horses, to realize that there is no shortage of good trainers who balance the quest for titles and purses with the welfare of horses, who see the animals in their barn as more than a pincushion means to an end.

Servis and Navarro – two trainers who allegedly did see the horse as nothing more than a means to an end – found a different end than they were expecting on Monday. That, at least, is good news for the industry. 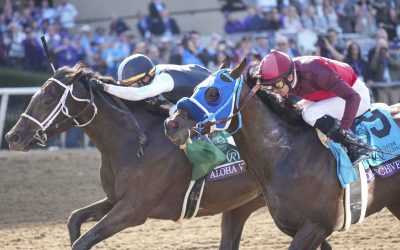