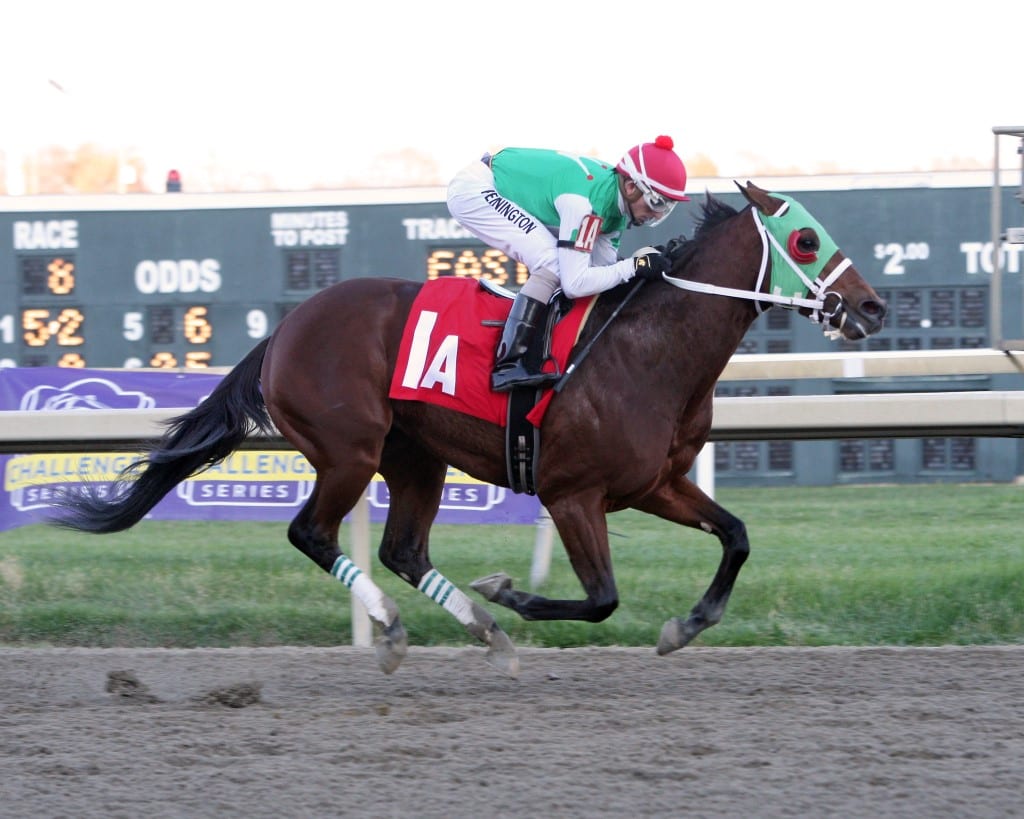 Trainer John Servis knows the exhilaration of winning Triple Crown races. He went from relative anonymity to national prominence when Pennsylvania-bred Smarty Jones swept the Kentucky Derby and Preakness before being upset by 36-1 Birdstone and falling one length short of Triple Crown immortality in the 2004 Belmont Stakes.

Chuck Zacney, inspired by Smarty Jones’ improbable emergence, entered the racing industry that same year by purchasing his first horse, Afleet Alex, for $75,000. He was almost immediately rewarded when the colt, named for his son Alex, took him to great heights, winning the Preakness and Belmont in 2005.

The years that followed the successes of Servis and Zacney in the spring classics brought a greater appreciation of those moments – and deepened their hunger for more.

Servis’ favorite time of year occurs when 2-year-olds arrive at his barn at Parx Racing in Bensalem, Pa. As they tentatively survey their new surroundings, he looks to them for hope and promise.

Some empty years after Afleet Alex taught Zacney lessons both hard and valuable.

“You think the game is easy and you’re certainly chasing that dream again,” he said. “That started in 2004 and here it is 2020, a lot of years later, and you still want to get back to that success.”

Zacney was on the Road to the Derby as recently as last year — only to fall off. Remsen Stakes winner Maximus Mischief, the first horse Alex ever spotted at a sale, sustained a career-ending soft-tissue injury to his right front leg while training for the Fountain of Youth Stakes at Gulfstream Park.

Servis and Zacney’s Cash Is King LLC combined to win the 2016 Kentucky Oaks with Cathryn Sophia, a Maryland-bred bargain purchased for $30,000 as a yearling. They also proved to be a formidable duo two years later, when Jaywalk rolled in the Breeders’ Cup Juvenile Fillies at Churchill Downs.

Both wonder if Mischevious Alex is the one that will get them to the Derby together. The son of Into Mischief, out of the winning mare White Pants Night by champion sprinter Speightstown, has done little wrong since Zacney purchased him for $140,000 as a 2-year-old in training at the Ocala Breeders’ Sales Spring Sale. He made the move at the urging of Alex, now 21.

Mischevious Alex won his debut at 4 1/2 furlongs at Parx last June 25. He has run six times at four different tracks, winning half of his starts with one second-place finish and one third-place result for earnings of $179,230. His only poor effort occurred when he struggled home seventh in the Sept. 21 Laurel Futurity Stakes at Laurel Park, his lone turf try.

The addition of blinkers two starts ago jumped the youngster to another level. He responded to the new equipment with a much more focused performance in the Nov. 5 Parx Juvenile, romping by 9 ¾ lengths to close his juvenile campaign.

He opened his 3-year-old campaign by notching his first graded-stakes triumph when he defeated Shivaree by six lengths as part of a geared-down seven-furlong effort in the Feb. 1 Swale Stakes at Gulfstream Park.

Servis is confident the one-mile Gotham is well within Mischevious Alex’s range. He is less sure after that.

“He’s not a big horse, so you kind of always worry about how far he will go and he doesn’t have a distance pedigree,” the trainer noted. “But the big asset with him is he has a great mind. He is such a smart horse. Nothing gets him upset. He just cruises along and waits for you to call on him.”

Mischevious Alex’s demeanor could not be better. He sleeps a good deal. He conserves energy, making a leisurely walk to the track and back each morning for training and never acting up.

“I guess it’s class,” Servis said. “You know, he walks around the barn like he owns the barn.”

Zacney, who added Glenn Bennett’s LC Racing as a partner before the Swale, is cautiously optimistic that the 3-year-old’s unflappable nature will help him exceed seeming distance limitations.

“Our goal with him is one day, one race, one furlong at a time,” he said. “We went from seven furlongs to eight furlongs. If he does well in New York, I think you will see us back in New York going a mile and an eighth.” That would be in the April 4 Wood Memorial, the final Derby prep at Aqueduct.

Alex was perched on his father’s shoulders when Afleet Alex provided his family with instant success. Now that his son can be at his side as part of the team, Zacney is pushing to reach the Derby more than ever.

“He’s got the bug. He’s learning and he loves the game,” Zacney said of Alex. His son has come so far that he is launching IVee, a medical-services company that can be contacted by patients requiring intravenous treatment through the use of a phone app.

Since only time will tell whether Mischevious Alex is good enough to make it to the first Saturday in May, one question remains. Who is responsible for misspelling mischievous?

Zacney pleads guilty. He was rushing and failed to use the spell-check function on his personal computer.