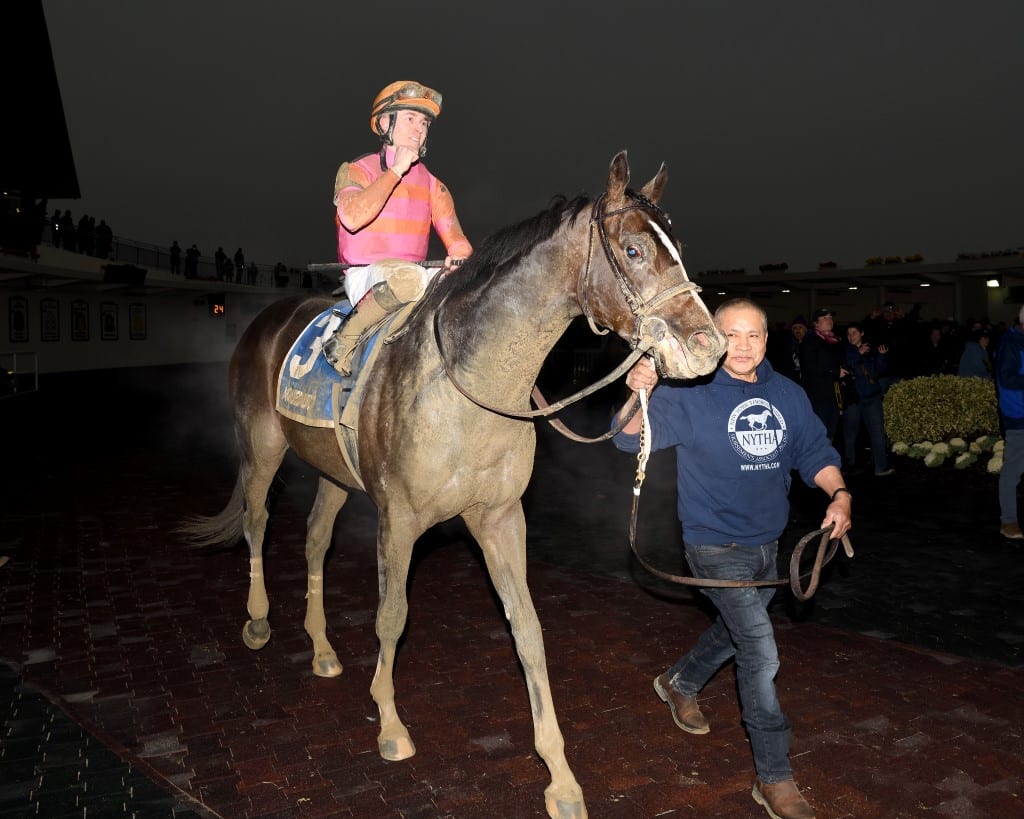 A Maryland-bred colt claimed his first stakes victory, a Parx maiden winner is on the road to the Kentucky Derby, and the full sibling to Late Night Pow Wow made his debut a winning one.

Field Pass, a Maryland-bred son of Lemon Drop Kid, stormed to the first stakes victory of his career February 1.

With regular rider Paco Lopez in the saddle, Field Pass tracked his rivals from the middle of the pack in the early stages of the Dania Beach Stakes at Gulfstream Park. When the field reached the half-mile point of the race, Field Pass began to make his move. The gray colt began steadily gaining on the leaders, weaving between rivals until he shot through an opening in the stretch and found himself in command. It was a slight lead, but one that Field Pass was not giving up.

Get Smokin and South Bend were right at the throatlatch of Field Pass in the final strides of the race, but their efforts were not enough to halt the momentum of the leader. It was a tight finish, but as the horses rumbled over the wire it was Field Pass by a neck, completing the one-mile turf race in a final time of 1:38.81 over good turf.

The Dania Beach Stakes marked the second victory from seven attempts in Field Pass’s career. Field Pass had previously competed in three other stakes races, but until his victory on Saturday his best finish had been his runner-up effort in the With Anticipation Stakes (G3) in 2019.

Bred by Mark Brown Grier, Field Pass is owned by Three Diamonds Farm and is trained by Michael Maker. To date, the three-year-old colt has banked career earnings of $174,650.

Parx Racing maiden winner Max Player took a big step up in class over the weekend, when he captured the Grade 3 Withers Stakes and stamped himself as a possible contender for the Kentucky Derby.

Kicking off his career at Parx Racing on November 12, 2019, Max Player finished a game second in a one-mile maiden special weight on the main track. The dark bay colt returned to action one month later at the same track, this time winning by over four lengths. That victory gave his connections the confidence to take a swing, and Max Player found himself in the starting gate of the $250,000 Withers Stakes (G3) on February 1, in what would only be his third career start.

Max Player rewarded the confidence of his connections, flying past the leaders in the final stages of the race to score by 3 ¼ lengths, collecting 10 points toward the Kentucky Derby in the process. Sent off with odds of 5-1, Max Player’s victory on Saturday came in 1:53.87 for nine furlongs over a fast main track, with 9-5 favorite Shotski finishing second.

Bred by K & G Stables, Max Player is owned by George Hall and is trained by Linda Rice. Currently, the three-year-old son of Honor Code has visited the winner’s circle two times from three career starts and has banked earnings of $173,500.

There was excitement at Charles Town Races this past week, when Muad’dib made his debut to the races a winning one. The previously unraced maiden is a full sibling to local star and multiple graded stakes winner Late Night Pow Wow. While Muad’dib has a lot to live up to being related to a mare that took down 12 of her 15 races, it is safe to say that the three-year-old gelding is off to a good start.

Muad’dib made his debut on February 5, in a $27,000, seven-furlong maiden special weight on the main track. Muad’dib lived up to the 4/5 odds that he left the gate with, soundly defeating his five rivals. With jockey Arnaldo Bocachica in the saddle, Muad’dib cruised to victory in a final time of 1:27.81 on a track that was listed as fast.

Bred by John McKee, Muad’dib is owned by David Raim and is trained by Jeff Runco. The gray son of Fiber Sonde picked up $16,200 for his win on Wednesday.