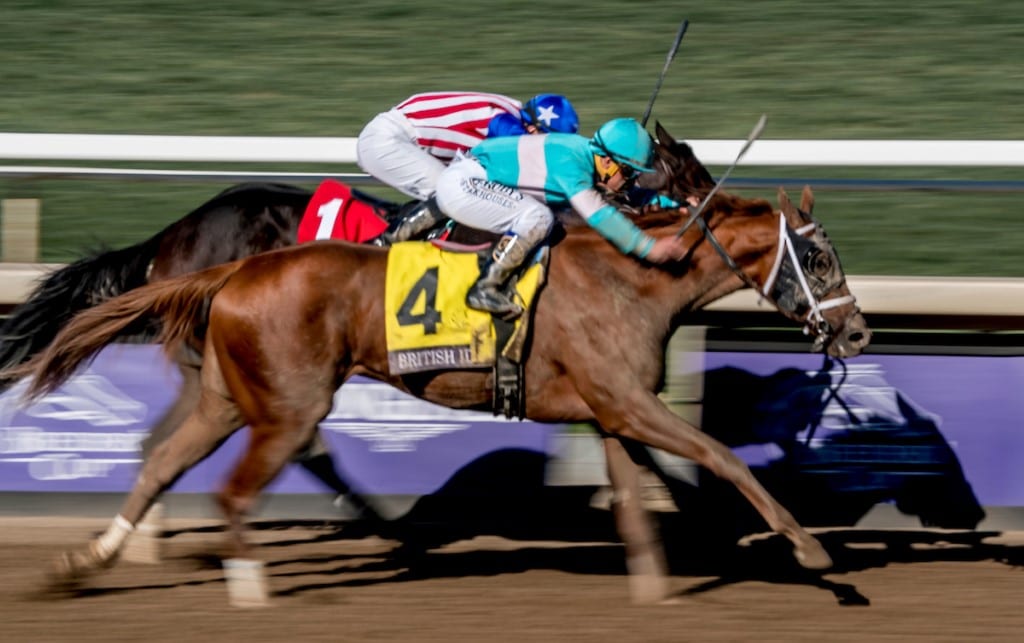 It was a momentous day at Diamond B Farm in Mohrsville, Pennsylvania when British Idiom captured the Gr. 1 Breeders’ Cup Juvenile Fillies at Santa Anita November 1. It became even more joyous when the chestnut filly received the Eclipse Award for champion 2-year-old filly in late January.

Diamond B is the home to British Idiom’s sire Flashback, a son of Tapit, who moved to Pennsylvania last year after standing his first three seasons at Hill ‘n Dale Farm in Kentucky. Stallions are usually relocated out of Kentucky when their first crops fail to produce much of merit; Flashback was moved just as his first 2-year-olds were hitting the track.

But Kentucky’s loss is Pennsylvania’s gain, and the folks at Diamond B are tickled pink that they’ve got the near-white gray.

British Idiom, who was purchased by bloodstock agent Liz Crow at the Fasig-Tipton Kentucky Fall 2018 October Yearling Sale for $40,000 on behalf of owners Michael Dubb, The Elkstone Group LLC, Madaket Stables LLC, and Bethlehem Stables LLC, has a pedigree that is laden with class and stamina, both top and bottom. But it wasn’t necessarily a pedigree that, at first glance, would have predicted her championship season.

Digging deeper, three stamina sources – Pleasant Colony, his sire His Majesty, and Nijinsky II – all appear in the pedigree of Flashback through his second dam, Rose Rhapsody. They also appear in the bottom line of British Idiom as her second dam, Yellowenglishrose, is a daughter of Belmont Stakes winner Colonial Affair, who is by Pleasant Colony and out of a Nijinsky II mare. Yellowenglishrose’s dam, Princess Baja, is by another Belmont Stakes winner, Conquistador Cielo.

Rose and Shine was bred by Jay Cochlin and James T. Sabiston in Ontario and was a multiple stakes winner at 2, capturing the Muskoka Stakes and the Princess Elizabeth Stakes at Woodbine en route to career earnings of $399,829. She was sired by Mr. Sekiguchi, a son of Storm Cat out of Welcome Surprise, a daughter of Broodmare of the Year Weekend Surprise. Weekend Surprise also appears in the pedigree of Flashback through his sire, Tapit, a son of Pulpit (A. P. Indy). As a yearling, Mr. Sekiguchi made headlines when he sold for $8 million at the 2004 Keeneland September sale to Hideyuki Mori.

Like many astronomically priced yearlings, the chestnut failed to make a dent towards repaying his pricetag, only earning $85,800 on the racetrack before an injury forced his retirement. He was, however, first or second in each of his four starts for trainer Bob Baffert.

Initially retired to Hill ‘n Dale Farm in 2008, Mr. Sekiguchi didn’t get an opportunity to become a successful sire. Moved from Hill ‘n Dale in 2010 to Bridlewood Farm in Florida, the stallion was then relocated four more times over the next five years, to Park Stud in Ontario and three farms in New York. The most current information available about his whereabouts lists him as being pensioned.

Rose and Shine became Mr. Sekiguchi’s first winner when she prevailed at Woodbine in her 2011 debut, and thereafter made 13 consecutive starts in stakes competition in Canada. She was one of only two blacktype winners he sired from 105 foals.

Crow recalled seeing British Idiom as a yearling, and was struck by her physical appearance.

“She was an outstanding individual, very pretty and leggy,” said Crow. “I loved the fact that she was the third foal from her dam, and that she was by a son of Tapit (Flashback). I was talking to a trainer from Woodbine at the sale, and he mentioned to me how good Rose and Shine was on the racetrack, and she had already produced a stakes horse. And the best part was that (British Idiom) was affordable.”

Flashback, out of Rhumb Line, by Mr. Greeley, is a full brother to Grade 1 winner Zazu, who was bought by Japanese breeders at the 2012 Keeneland November breeding stock sale for $2.1 million, as well as a half-brother to stakes winner Corinthian’s Jewel and Group 2-placed Art Princess. He is also inbred to Secretariat through Tapit as well as through Mr. Greeley (a son of Gone West).

Flashback showed talent on the racetrack, as well, winning the Gr. 2 Robert B. Lewis Stakes at Santa Anita at a 1 1/16 miles, and placing in the Gr. 1 Santa Anita Derby at 1 1/8 miles. He was considered one of trainer Bob Baffert’s contenders for the Kentucky Derby, but exited the Santa Anita Derby with a knee chip, which sent him to the sidelines until later that year. He made one start at 4, that being a third-place finish in the Gr. 3 Ack Ack Handicap.
Flashback was subsequently retired to Hill ‘n Dale Farm, where he stood his first season in 2015 for a stud fee of $7,500. This year, he’ll stand for $3,500, live foal.

“Storm Cat/Northern Dancer mares should be a great match with Flashback,” said Glenn Brok, owner of Diamond B. “And it looks as though his progeny will stretch out as they get older. I’m pretty excited about the response so far from breeders in the region.”

Unlike her half-sisters, and despite a speed-leaning Dosage Index of 6.00, the sire power in both her top and bottom line has propelled British Idiom to victory in a pair of two-turn, Grade 1 events. 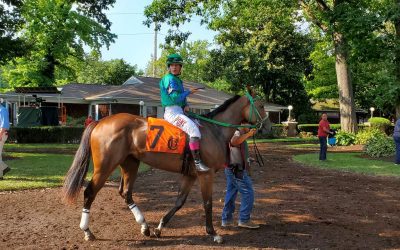