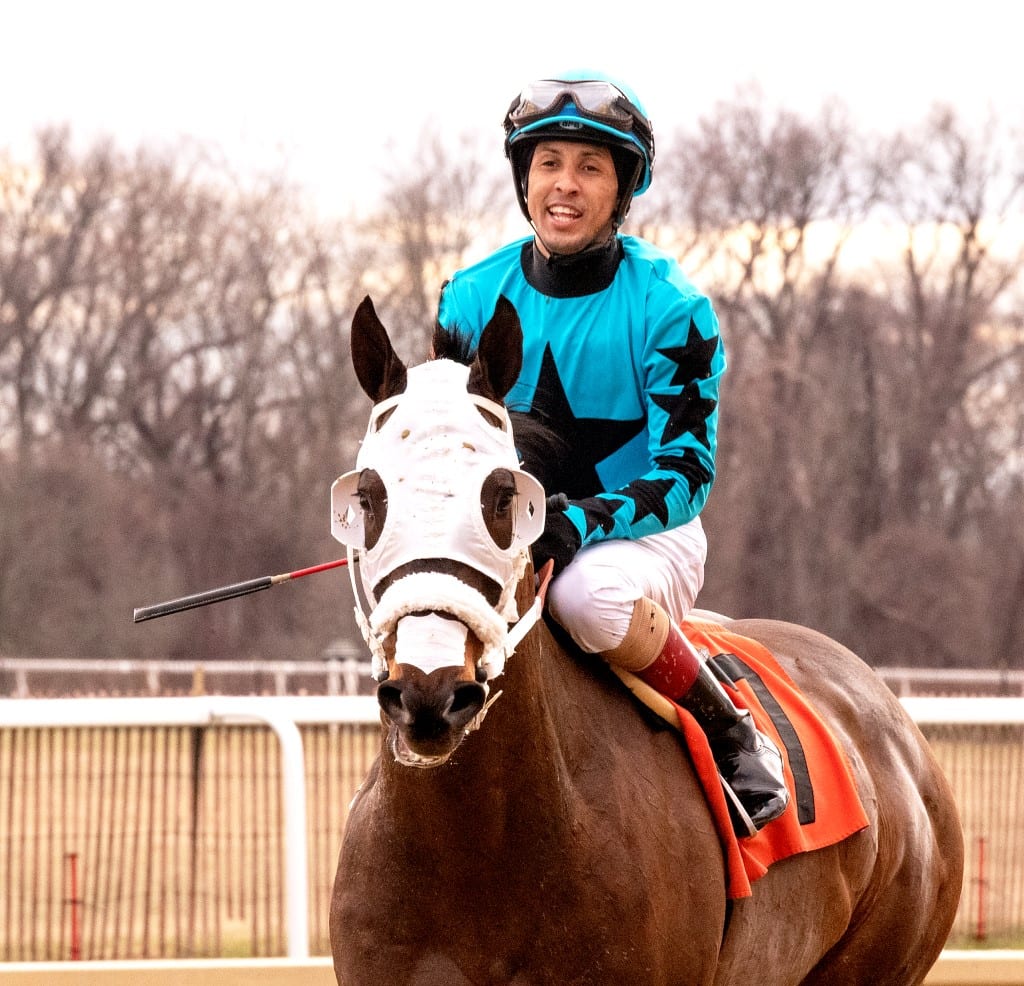 Video by The Racing Biz. Text below from a Maryland Jockey Club release.

Ronald A. Brown’s Justin Front, racing first time off the claim, rolled to a front-running 1 ¼-length triumph Sunday at Laurel Park to give jockey Victor Carrasco his 1,000th career victory.

“It’s a great feeling,” Carrasco said. “After dealing with so many injuries and having some health issues and everything, it feels amazing.”

Breaking from the far outside post in a field of seven as the even-money favorite, Justin Front ($4) cruised up to the lead and held it through a quarter-mile in 23.63 seconds pressed by Once in a Lifetime. Chasing the Candy took up the chase after a half in 47.31 seconds but Justin Front remained in command throughout, going six furlongs in 1:12.51. Lectric Choke made a late bid but finished a nose behind runner-up Chasing the Candy.

Carrasco was joined in the winner’s circle after the race by members of both his family and Maryland’s jockey colony. He ran fifth with Higher Power in Sunday’s eighth-race finale, his only other mount Sunday.

“I was blessed to have the support of my family, especially my mother and my girl Brooke who worked with me every day,” Carrasco said. “To be honest, I thought that I wasn’t going to make it back to ride. After months of going to doctor appointments and all of that, things were the same. I never thought that I would be able to come back and be back in the winner’s circle.”

A native of Guyama, Puerto Rico, Carrasco graduated from the famed Escuela Vocacional Hipica jockey school and won 11 races in his home country before coming to the United States in March 2013.

Carrasco registered his first domestic winner aboard Wellspring Legacy March 23, 2013 at Tampa Bay Downs, heading north before the month was out and riding at Parx, Penn National and Delaware Park before settling in Maryland for good that fall.

During his rookie season, Carrasco led all bug riders with 215 wins and $4.35 million in purse earnings to become the 10th Maryland-based jockey to be named champion apprentice. He ranked third in the state with 95 wins and captured Laurel’s fall meet title, fueled by a streak of riding at least one winner in 24 of the final 28 racing days.

Carrasco also owns summer meet titles at Laurel in 2015 and 2017 as well as Pimlico Race Course’s 2015 spring stand. He has battled injuries in recent years, missing nine months from September 2017 to June 2018 with a broken fibula and tibia in his right leg, but rebounded to finish 2019 with 98 wins and $3.9 million in purse earnings, his highest totals since 2016.

Still seeking his first career graded-stakes victory, Carrasco has been the regular rider for such horses as multiple stakes winners Cordmaker and the recently retired Phlash Phelps and Shimmering Aspen, all trained by Rodney Jenkins. Cordmaker, pointing for a 5-year-old campaign, was third by two necks in the 2019 Pimlico Special (G3) with Carrasco up.

“My mother is my biggest supporter; she’s my life. I wouldn’t be able to be here without her,” Carrasco said. “Every time I got hurt, every time I’m not feeling well, every time something comes up she’s always there for me. I’m blessed to have her in my life.”