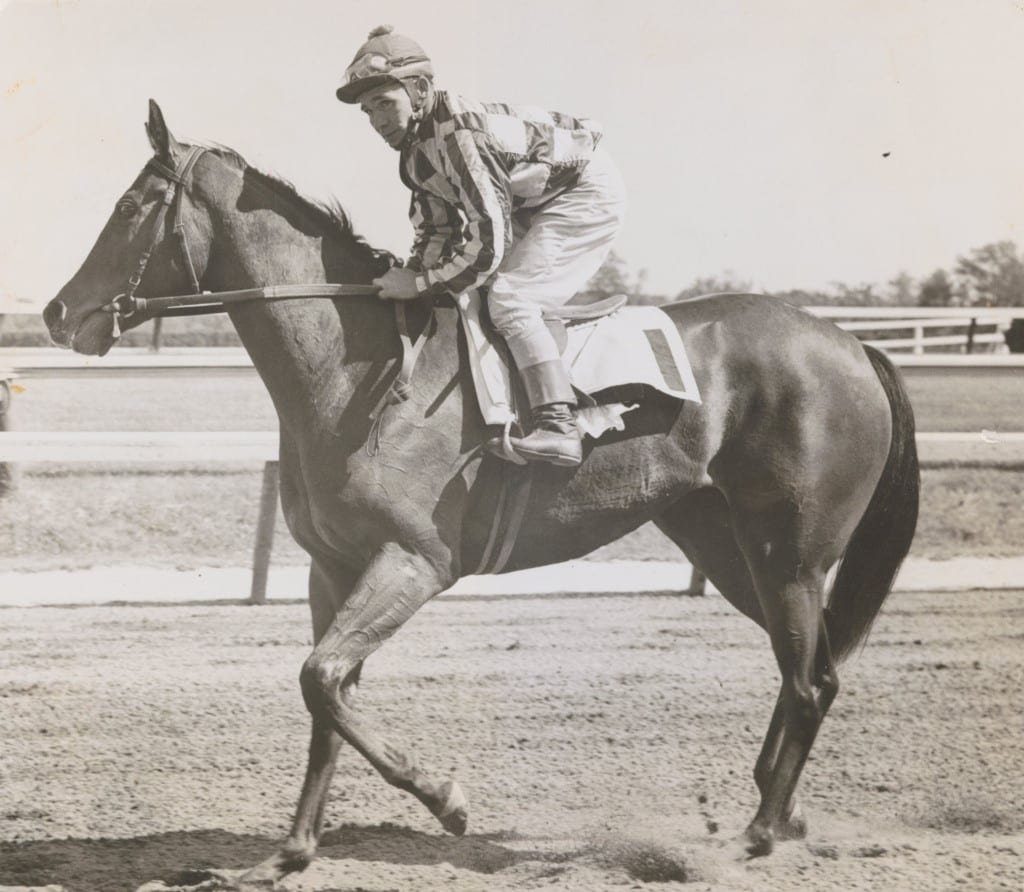 Cicada’s story starts not with a famous sire, but with a “blue hen” mare named Hildene. Christopher Chenery had managed to restore The Meadow, his family’s ancestral home, after a successful career as an engineer. Chenery turned his lifelong connection to horses into a breeding operation, buying his first stallion right after buying The Meadow in 1936. At Xalapa Farm’s dispersal sale in 1939, Chenery bought three yearlings by 1926 Kentucky Derby winner Bubbling Over, including a filly he named Hildene.

Like her sire, Hildene was born with poor vision, which made her a poor racehorse, but she made up for her shortcomings on the racetrack as a foundational mare for Christopher Chenery. She repaid her $750 purchase price and rewarded Chenery’s faith in her with thirteen foals, including Meadow’s first classic winner, Hill Prince. That colt not only won the 1950 Preakness Stakes after finishing second in the Kentucky Derby, but also went on to beat the older handicap horse Noor in the Jockey Club Gold Cup. In 1949, as Hill Prince was just getting to the races, Hildene foaled a filly by Bossuet, a young sire best known for his part in the triple dead heat in the Clark Handicap in 1944, eventually named Satsuma.

That filly, named Satsuma, was not quite the standout that her half-brother Hill Prince was, winning only one of her eight races, but, like her dam Hildene, Satsuma made her impact as a broodmare. In 1958, Chenery bred Satsuma to Bryan G., one of the Meadow’s homebred stallions sired by Blenheim II, sire of Triple Crown winner Whirlaway. In May 1959, Satsuma foaled a beautiful bright bay filly with a wee North Star-shaped blaze, Cicada.

Under the tutelage of trainer Casey Hayes, Cicada went to the races early in her two-year-old year, about the same time as stablemate Sir Gaylord. While Sir Gaylord racked up several stakes wins in 1961 and stamped himself an early favorite for the 1962 Kentucky Derby. Cicada’s juvenile season was even more impressive: she broke her maiden in her very first start and then went on to start fifteen more times that year, finishing in the money in every start.

She won her first stakes race, the Blue Hen, in late May and then added seven more stakes victories, including the Spinaway, the Matron, and the Frizette, at distances from five furlongs to a mile and a sixteenth. She ended 1961 as the year’s champion two-year-old filly, a full slate of stakes races awaiting her the next year.

To date, the Kentucky Derby’s 145 winners include only three fillies; in fact, only 40 have contested the race with their male counterparts under the Twin Spires.

In 1962, Cicada could have been one of them — had fate not had other ideas. That spring, Sir Gaylord added wins in the Everglades and Bahamas Stakes, where he beat the previously undefeated Ridan, to consolidate his status as a favorite for the Kentucky Derby.

Cicada, meanwhile, continued her winning ways to start the year, beating older fillies and mares in an allowance race in early February. A month later, she faced the colts, including Ridan, in the Florida Derby, one of the major prep races for the Kentucky Derby. Ridan and Cicada hooked up coming out of the final turn, dueling head-to-head for nearly all of the 941 feet of the Gulfstream stretch. In the end, Ridan held a nose advantage over the filly, finish-line photos showing the colt’s head high while Cicada’s head was low in her drive to give all she had.

Such a performance — and her already stellar resume — might have moved her into Derby consideration. But when Hayes shipped Sir Gaylord and Cicada to Churchill Downs, he targeted the colt for the Derby and the filly for the Kentucky Oaks.

The day before the Derby, on the morning of the Kentucky Oaks, Cicada saw her feed withheld from her, a signal that today was race day. As she awaited her appointed post time later that afternoon, Casey Hayes sent Sir Gaylord out to the track for his final workout for the next day’s Derby. The colt returned limping, his right foreleg, which had nagged him after his Bahamas victory, clearly causing the colt pain. An x-ray showed a fracture of the sesamoid bone and the end of Sir Gaylord’s career.

Hayes wanted to consult Christopher Chenery on what to do with Cicada, who had been entered in the Derby as insurance. But Chenery’s train was delayed; by the time he got to Churchill Downs, it was too late to pull Cicada from the Oaks in favor of a try at the Derby. The filly went off at 1-10 and brought the lilies home easily, winning by three lengths. As Sir Gaylord exited the scene to stand at the Meadow, Cicada went on to more stakes victories in 1962.

She followed up the Oaks triumph with victories in the Mother Goose and the Acorn Stakes, setting her up with the potential to become the first to win the Filly Triple Crown, the third leg of which was the mile-and-a-quarter Coaching Club American Oaks. Alas, the filly Bramalea got the better of her, beating Cicada by a half-length.

In August, the daughter of Bryan G. and Satsuma tried the boys again in the Travers, her worst performance to date. She swerved coming out of the gate, bumping another horse, and then never recovered, finishing last. Cicada won two of her last four starts of the year, taking home the Beldame and the Jersey Belle and the title of champion three-year-old filly, the second year in a row Cicada would end the year as the champion of her division.

In 1963, at age four, Cicada ran eight times, winning four, including the Columbiana and Sheepshead Bay Handicaps, the latter on turf.

In her final start of the year, the Delaware Handicap, she again faced fillies and mares of all ages. Coming out of the gate, Cicada was eager to run on the lead, but jockey Willie Shoemaker couldn’t find the running position he wanted, so he took her back. The filly resisted, forcing Shoemaker to try to settle her again. In the process, his saddle started to slip, making the ride on an eager Cicada all the more precarious. The heavy impost of 128 pounds took its toll on Cicada, who couldn’t make up ground on the inside and finished second to the long shot Waltz Song, who carried twelve fewer pounds.

Prior to the DelCap, Cicada had shown some signs of being off and, sure enough, nearly a month later, a stifle injury forced her retirement, with a record of 23 wins, eight seconds, and six thirds in 42 starts. For the third year in a row, Cicada was voted the champion of her division, her $783,324 making her the world’s leading money-winning mare.

She was sent to The Meadow to stand as a broodmare, but, when her first cover did not result in a pregnancy in early 1964, Chenery brought her back to the track. In her lone start of the year, she finished fourth in a six-furlong allowance race and then was retired for good.

As a broodmare, Cicada’s most notable foal was the gelding Cicada’s Pride, sired by her bad luck stablemate Sir Gaylord. Cicada’s Pride won a couple of minor stakes as a two-year-old. None of her daughters went on to produce any stakes winners themselves.

Instead, Cicada’s biggest impact came on the track: she was inducted into the National Museum of Racing and Hall of Fame in 1967 and had a stakes race named in her honor at Aqueduct Racetrack in 1993. The six-furlong Cicada Stakes is generally run in March and serves as a prep race for the rich three-year-old stakes later in the spring, like the Kentucky Oaks. Cicada passed away in 1981 at age twenty-two is buried at Jonabell Farm. On the Blood-Horse magazine’s list of the top 100 champions of the 20th century, Cicada comes in as #62, ahead of such names as Noor, Regret, and Genuine Risk.

Cicada was just one of Christopher Chenery’s homebreds to become a champion on the track, with Hill Prince and First Landing counted among the long list of stakes winners to come from Meadow Stud. In the early 1970s, Chenery became the breeder of record for Riva Ridge, who won the 1972 Kentucky Derby and Belmont Stakes, barely missing out on a Triple Crown himself, and then the blockbuster juggernaut of Secretariat, who still holds the record times for all three of the Triple Crown classics. For so many of us, Secretariat made the blue and white Meadow silks legendary, but years before Somethingroyal foaled the second Big Red, champions like Cicada made Virginia’s Meadow Stud one of the mid-Atlantic’s most prestigious and recognizable breeders. 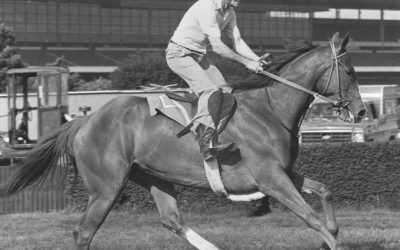 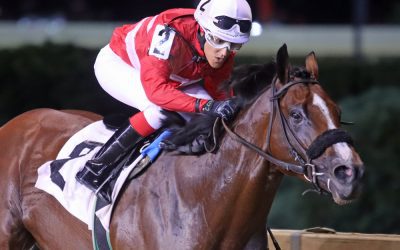 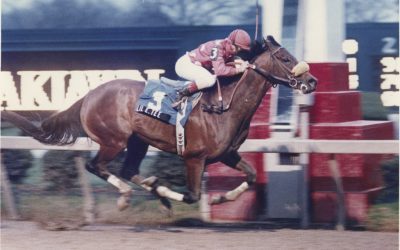 Apprentice jockey Marhsall Mendez is making a mark at Charles Town Races, shooting up the standings while riding for numerous trainers- and hoping for more. 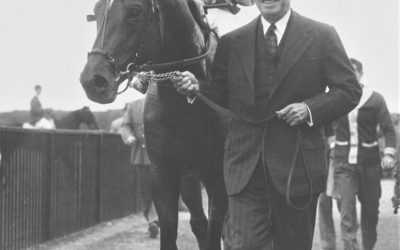