Photo by Coady Photography. In the roughly six months since she assumed the demanding role as Racing Secretary at Charles Town, Elizabeth Rogers had continued to learn from her longtime mentor, Director of Racing Charlie McIntosh, while seeking to carve out a niche of her own in the race office and interacting with the region’s trainers. Rogers, 29, officially took over as Racing Secretary in July although her ascension to the top position in the race office began not long after she graduated from the University of Arizona’s Race Track Industry program. She has undertaken a variety of roles since arriving at Charles Town in 2012 and sought to learn something from each of them. With the 2019 racing season having ended on Saturday, Rogers is always looking forward to the 2020 season, which begins January 8.
“I’m always looking for ways to make the racing product better,” Rogers said. “Some weeks when we all get together in the race office and you know what races are in the book and what races that you’re drawing you know it’s going to go quickly. But some days there are some races that get tougher to fill and then we drop it back in to be used as a sub[stitute] race later. But I usually know what we have here in the barns and what we’re likely to get from guys who ship in and what races will fill and be competitive and appealing to the betting public.” Rogers’ work is getting good reviews in the racing community. McIntosh, her mentor, earned his first job as Racing Secretary nearly 40 years ago at the age of 28 at Latonia in Kentucky, later became the General Manager at Birmingham Downs, and then ventured to Charles Town in 2010. He has sought to give Rogers as much insight as possible into the game while stepping back to allow her to grow.

“One thing about Liz is she’s a very hard worker and she understands the game,” McIntosh said. “She’s very adept at knowing what horses are on the grounds and what races are going to fill each night. This is a very demanding, tough job. You’re not going to please everybody. On any given night, only the guys that win races are going to be happy with the race office. But the main thing is you have to be fair, and Liz is definitely fair and honest with the horsemen. It’s a job where you’re just not going to make everyone happy.”

Over the years, Charles Town trainers Jeff Runco and Tim Grams have enjoyed ample success at the historic Jefferson County oval, and they have each spent their fair share of time interacting with racing secretaries. Both agreed that Rogers’ ascension to Racing Secretary has been a seamless transition from the days when McIntosh held the title.

“One thing about Liz is she’s very hard working and very conscientious,” Runco said. “Being a racing secretary at any track is not an easy job. Most owners and trainers are not going to go home happy. But Liz understands the game and she’s great at working with the horsemen. She’s learned a lot from Charlie, and not many people know as much about the race office as Charlie. Liz is doing a great job, and she’s going to be a good racing secretary for a long time.” 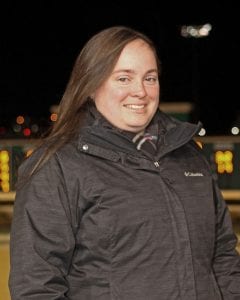 “Liz definitely knows the horses and understands what it takes to put together a good [condition] book,” Grams said. “She’s got a tough job. I mean, it’s tough to keep all the local guys happy and still open up the condition book to allow some other guys from out of town to race here to make for competitive races and improve the product. She’s learned a lot from Charlie over the years, and she’s doing a good job.” Rogers has gradually accepted more roles within the Racing Secretary’s task, overseeing the regular menu of racing at the oval. And she is looking at taking a more forward role in recruiting runners for the Grade 2, $1 million Charles Town Classic on April 18 and the supporting open stakes on the card. “Right now, we don’t have a stakes coordinator, so Charlie wants me to make the trips to Florida and California and look at bringing horses here for the Classic,” Rogers said. “It’s our biggest race and it’s really become one of our signature days. Next year we’ll also be part of the MATCH Series, and that’s a big deal because that weekend we won’t be competing with other tracks for the same horses. Right now we have a lot of horses, so filling races has not been that tough. In the summer, when more tracks are running, it gets a little tougher to fill races, but that means more chances for our local guys.”