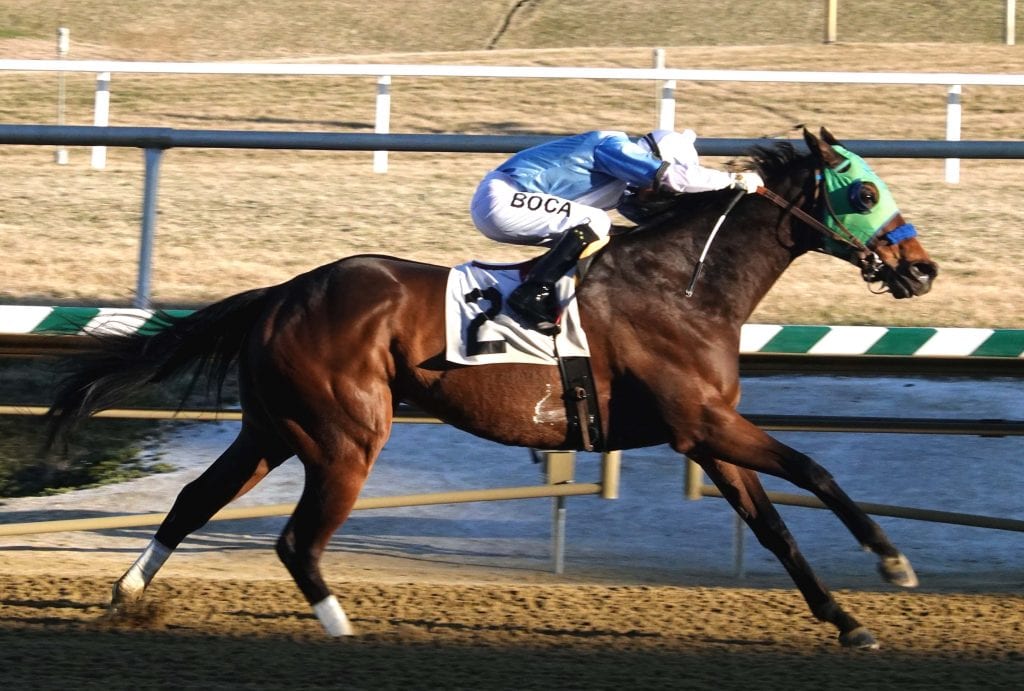 Lewisfield won the Not for Love Stakes at Laurel Park with Arnaldo Bocachica up. Photo by Laurie Asseo.

Regardless, Wednesday’s renewal of the Fabulous Strike has attracted the four-year-old Firenze Fire, who three weeks-plus ago was a pretty good fifth in the Grade 1 Breeders’ Cup Sprint, finishing some four lengths behind winner Mitole. Firenze Fire has been installed as the 8-5 morning line favorite.

Firenze Fire, trained by Jason Servis for Mr. Amore Stable, has just a single win this year, that coming in the $150,000 Runhappy Stakes at Belmont Park in May. But he has finished second in a pair of Grade 1 events this year, the Forego, in which he was three lengths in arrears of Mitole, and the Vosburgh in September at Belmont, where he was just a nose behind Imperial Hint.

Firenze Fire is 3-for-7 at the six-furlong distance of the Fabulous Strike and overall has won seven career races while amassing more than $1.5 million in earnings. Regular pilot Irad Ortiz, Jr. has the mount.

The full-brother duo of Midnightcharly and Midtowncharlybrown are also slated to return to Grantville – they ran third and first, respectively, in the Chocolate Town Sprint here June 1 – and the entry is 5-1 on the morning line. They are trained by Ed Coletti for Uptowncharlybrown Stud LLC and Godric LLC.

Midtowncharlybrown won this event last year, cruising to a front-running score by nearly three lengths at 10-1 odds. He’s won twice in 2019, scoring in the Chocolate Town and then, at Parx, in the Banjo Picker Sprint for Pennsylvania-breds. He has not raced since an indifferent sixth-place finish in the Bensalem Stakes September 2 at Parx.

A top-two finish would push Midtowncharlybrown’s career earnings past the half-million-dollar mark. Roberto Rosado has the mount.

His younger-by-a-year brother Midnightcharly enters this event off a win over the strip in allowance company. Midnightcharly won the Lyman Stakes for state-breds in April at Parx and has placed in two other stakes this year, finishing behind big brother in both. Kendrick Carmouche has the mount.

Lewisfield (4-1 morning line) finished third as the 8-5 favorite in this event last year, but the Jeff Runco trainee hasn’t had quite as productive a year as he did last season. Still, he’s earned over $100,000 this season on the strength of a win in the Not for Love Stakes for Maryland-breds in March at Laurel and four other stakes placings, including a third-place finish in the Grade 3 Maryland Sprint at Pimlico.

Trevor McCarthy, who rode Lewisfield to a third-place finish in the Maryland Million Sprint, has the mount.

Jason Servis, trainer of Firenze Fire, also will send out the fourth choice on the morning line, Happy Farm (6-1). A $30,000 claim in March, he’s won his last three starts while gradually moving up in class. The five-year-old, in career-best form now and hunting his first stakes victory, will have Jorge Vargas, Jr. in the irons.