Chrome farewell, Bodexpress back, more: The week in social media 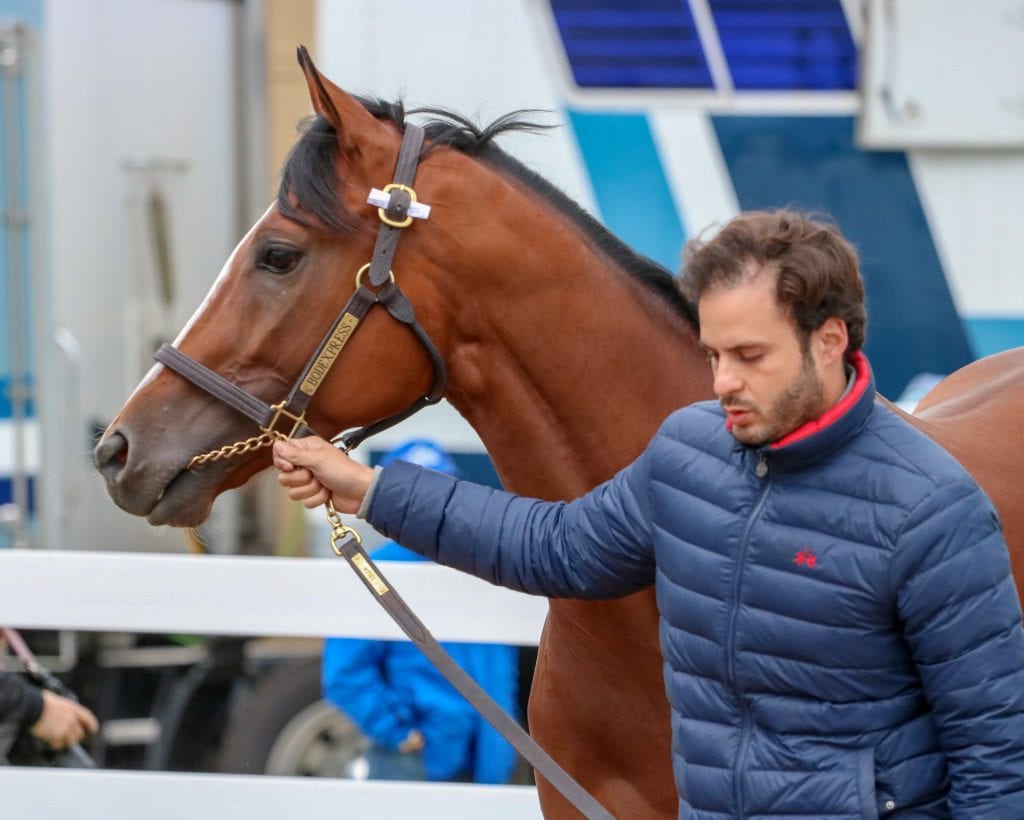 Bodexpress arrives at Pimlico before the 2019 Preakness. Photo by Dottie Miller.

A couple of two-year-olds impressed in stakes victories at Laurel Park over the weekend, 2014 Preakness winner California Chrome has been relocated to Japan, and the horse made famous for running wild at this year’s Preakness Stakes is now a track record holder.

Newstome had racing fans excited over the past weekend, when he added a second consecutive stakes win to his name. The two-year-old Pennsylvania-bred son of Goldencents took home the gold by the bob of the head in the James F. Lewis III Stakes at Laurel Park on Saturday, completing the six-furlong charge in a swift final time of 1:10.65 on the main track. It was his third victory overall in four career starts.

Bred by Equivine Farm, Newstome is owned by Marie Trombetta and is trained by Michael Trombetta. To date, the colt has banked earnings of $165,000.

Newstome and I take the James F Lewis stakes. Thank you to trainer Michael Trombetta and employees for all there hard work on getting this horse to the winner circle today. So privileged to be apart of it ?? https://t.co/RLJsIo3DdT

Another promising, young thoroughbred made an appearance at Laurel Park over the past weekend, when Cofactor skipped to victory in the $100,000 Warrior’s Reward Smart Halo Stakes.

With jockey Joe Bravo in the irons, Cofactor took command in the stretch and cruised home with authority to win the six-furlong match in a final time of 1:12.24. If was the first stakes victory for the two-year-old daughter of The Factor and the third consecutive win overall in Cofactor’s four-race career.

Bred and owned by Stoneway Farm, Cofactor is in the training care of Kelly J. Breen. To date, Cofactor has banked current career earnings of $137,050.

Chrome, as in gone

News broke this week that 2014 Kentucky Derby and Preakness hero California Chrome has been sold to Japanese interests. After the California Chrome Syndicate reached an agreement with the JS Company LDT. of Japan, who acquired the stallion, the announcement was made on November 20 that the chestnut son of the late Lucky Pulpit will continue stud duties in Japan. Partial owners Perry and Denise Martin will continue to be part of California Chrome’s breeding plan.

Along with his magical run through the first two legs of the Triple Crown in 2014, California Chrome also conquered the Dubai World Cup in 2016 and earned dominating victories in the San Diego Handicap (G2), Pacific Classic (G1), and Awesome Again Stakes (G1) that same year. He was also crowned with Horse of the Year and Champion Three-Year-Old Colt honors in 2014 and Horse of the Year and Champion Older Horse honors in 2016. Overall, he triumphed 16 times in 27 career races, with seven of those wins coming in the form of Grade 1 scores. Upon retirement from racing, California Chrome had earned a staggering $14,752,650 in purse money.

California Chrome had 473 mares reported bred in his first three books during his time at Taylor Made Stallions, with his first crop of yearlings selling this year. California Chrome also stood at Sumaya Stud in Chile in 2017 and 2018. With the deal now in place, California Chrome’s next journey in his duties as a stallion will take place at Arrow Stud in Hokkaido, Japan.

That’s Mr. Bodexpress to you

Bodexpress, the riderless, runaway horse that made headlines at this year’s running of the Preakness Stakes, has made headlines once again when he found himself as the new track record holder at Gulfstream Park West (formerly Calder Race Course) on November 20.

Back in May, Bodexpress captivated the racing world when he lost his rider at the start of the Preakness and continued to run the race before being apprehended by an outrider. At the time, the quirky son of Bodemeister had never stepped foot in the winner’s circle. However, the bay colt has come a long way since then. Not only did he finally break his maiden but he has now also followed up his first win with a record-smashing victory in an allowance race this past Wednesday.

Contested at the distance of one mile on the main track, Bodexpress led every step of the way and romped to a 6 ¾-length victory in a final time of 1:35.58. The colt’s performance shattered the previous record of 1:36.25, which had been held by High Ideal. Until Bodexpress crossed the wire on Wednesday, it was a record that had been untouched for the past 18 years.

Owned by Top Racing LLC and Global Thoroughbreds LLC, Bodexpress is trained by Gustavo Delgado and ridden by jockey Emisael Jaramillo. The colt has a current record of two wins from nine starts, and career earnings of $254,300.

Thanks to his record-breaking win this week, Bodexpress will not only be known as the runaway horse at the Preakness Stakes, but also as a track record holder.