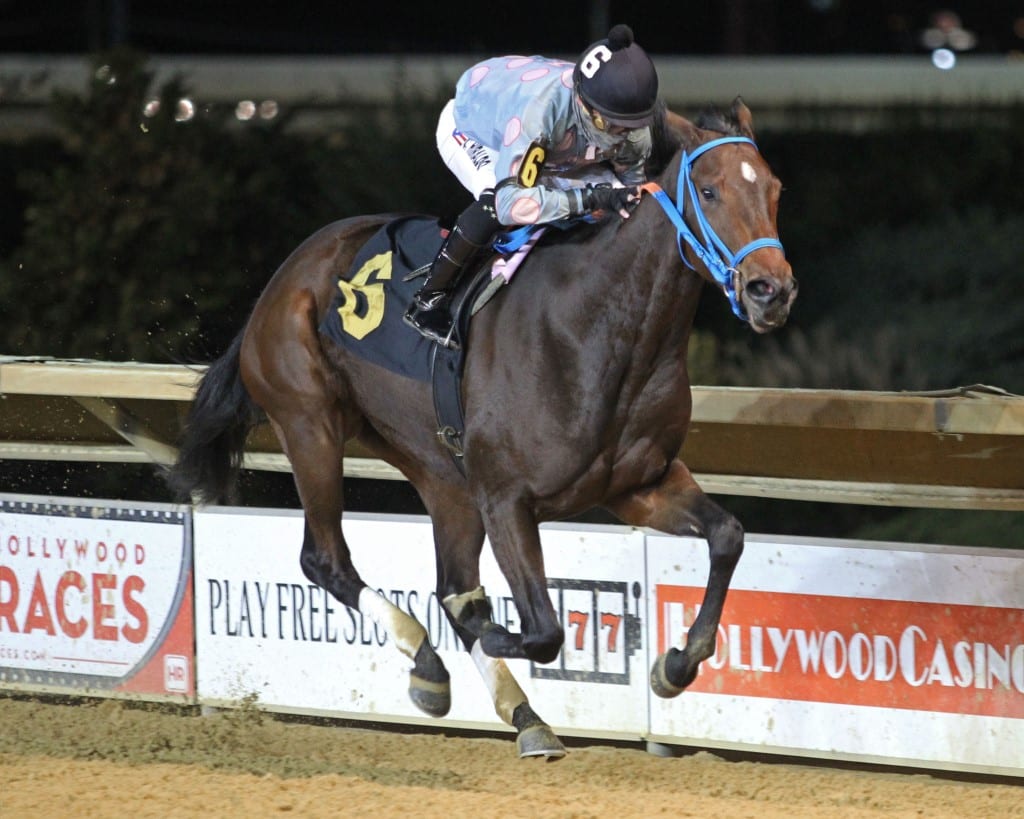 The Mid-Atlantic area was well represented during Breeders’ Cup weekend, Pennsylvania gained a new stallion for 2020, and a West Virginia-bred filly maintained a perfect record after taking on the boys over the weekend.

An action-packed Breeders’ Cup weekend took place last Friday and Saturday at Santa Anita Park, with the Mid-Atlantic area being well represented by its runners such as Sharing, British Idiom, and Spun to Run.

With jockey Manuel Franco in the pilot seat on Friday, Sharing flew to a decisive victory in the Breeders’ Cup Juvenile Fillies Turf (G1). At odds of 13-1, not only did the two-year-old Maryland-bred daughter of Speightstown spring an upset over a formidable group of runners, but she also added to the Breeders’ Cup legacy of her family tree.

Owned by Eclipse Thoroughbred Partners and Gainesway Stables (Anthony Beck), Sharing completed her mile-long dash in the Breeders’ Cup Juvenile Fillies Turf in a final time of 1:34.59, 1 ¼ lengths ahead of her nearest competitor. To date, the filly has a current record of three wins from four starts, and earnings of $730,300.

British Idiom had Pennsylvanians cheering when she soared to glory in the Breeders’ Cup Juvenile Fillies (G1) on Friday; she is a daughter of Flashback, who stands at Diamond B Farm in Mohrsville, Pennsylvania.

British Idiom put her undefeated record on the line in the 1 1/16-mile Breeders’ Cup Juvenile Fillies. With jockey Javier Castellano guiding her, British Idiom raced toward the back of the pack until Castellano gave the command to rally. The chestnut daughter of Flashback charged after the leader, Donna Veloce, who was in full command up front. With a late surge, British Idiom claimed victory and elevated her record to a perfect three-for-three.

Owned by Michael Dubb, The Elkstone Group (Stuart Grant), Madaket Stables and Bethlehem Stables, and trained by Brad Cox, British Idiom stopped the clock in the Breeders’ Cup Juvenile Fillies in a sharp final time of 1:47.07. To date, the undefeated filly has banked earnings of $1,381,250, which isn’t too shabby for a filly that was purchased for a mere $40,000 as a yearling and by a stud who stands for the humble price of $3,500.

Parx-based Spun to Run made his Pennsylvania home track proud on Saturday, when he made every pole a winning one in the Grade 1 Breeders’ Cup Dirt Mile. At odds of 9-1 the swift son of Hard Spun pulled the upset on even-money post time favorite Omaha Beach, leaving him behind by 2 ¾ lengths at the finish.

With jockey Irad Ortiz, Jr. in the irons, Spun to Run made the Breeders’ Cup Dirt Mile his second win in a row as he was fresh off a convincing victory in the M.P. Ballezzi Appreciation Mile Stakes at Parx a month earlier. After his tour de force over the Santa Anita main track on Saturday, which lasted for 1:36.58, Spun to Run boosted his lifetime record to five wins from eleven starts, and earnings of $1,010, 520.

Bred by Sabana Farm, Spun to Run was purchased by owner Robert Donaldson and trained by Juan Carlos Guerrero. Donaldson purchased the colt from the 2018 Fasig-Tipton Midlantic Two-Year-Olds in Training Sale, for the modest price of $64,000.

it was announced that Normandy Invasion will be relocated to Pennsylvania for 2020. The track record-setting stallion, who previously stood at Spendthrift Farm in Kentucky, will now stand at Dr. William J. Solomon’s Pin Oak Lane Farm in New Freedom, PA.

Normandy Invasion, a son of champion sire Tapit, won twice and had five seconds from twelve starts, and banked earnings of $551,900 during his time on the track. The Grade 1-placed runner also set a track record at Gulfstream Park at the age of four, when he romped in a one-mile allowance/optional claiming race in a smoldering final time of 1:33.13.

Normandy Invasion will stand for a fee of $2,500 in 2020. His first crop of runners are two-year-olds of this year.

West Virginia-bred Boundtobebad maintained a flawless record over the past weekend, when she conquered her male rivals in the West Virginia Futurity to make her record a perfect 3-for-3.

With jockey Christian Hiraldo in the saddle, Boundtobebad sprang from the gate and set the pace in the West Virginia Futurity. Longshot Ocasionaly Classy pressed the pace until faltering nearing the far turn. Shaking clear, Boundtobebad extended her lead into the stretch, taking command by 11 lengths. The two-year-old daughter of Windsor Castle completed the seven-furlong test in a final time of 1:27.35 on the main track at Charles Town Races.

Boundtobebad now has two stakes victories under her belt, as she won the West Virginia Triple Crown Nutrition Breeders’ Classic Stakes a month earlier at Charles Town Races. To date, the dark bay or brown filly has collected total earnings of $86,895.

Bred and owned by Taylor Mountain Farm, Boundtobebad is in the training care of James Casey.

Boundtobebad looks pretty good! The 2-year-old filly is now a perfect 3-for-3 in her young career! @TheRacingBiz https://t.co/roiMUtpVMq