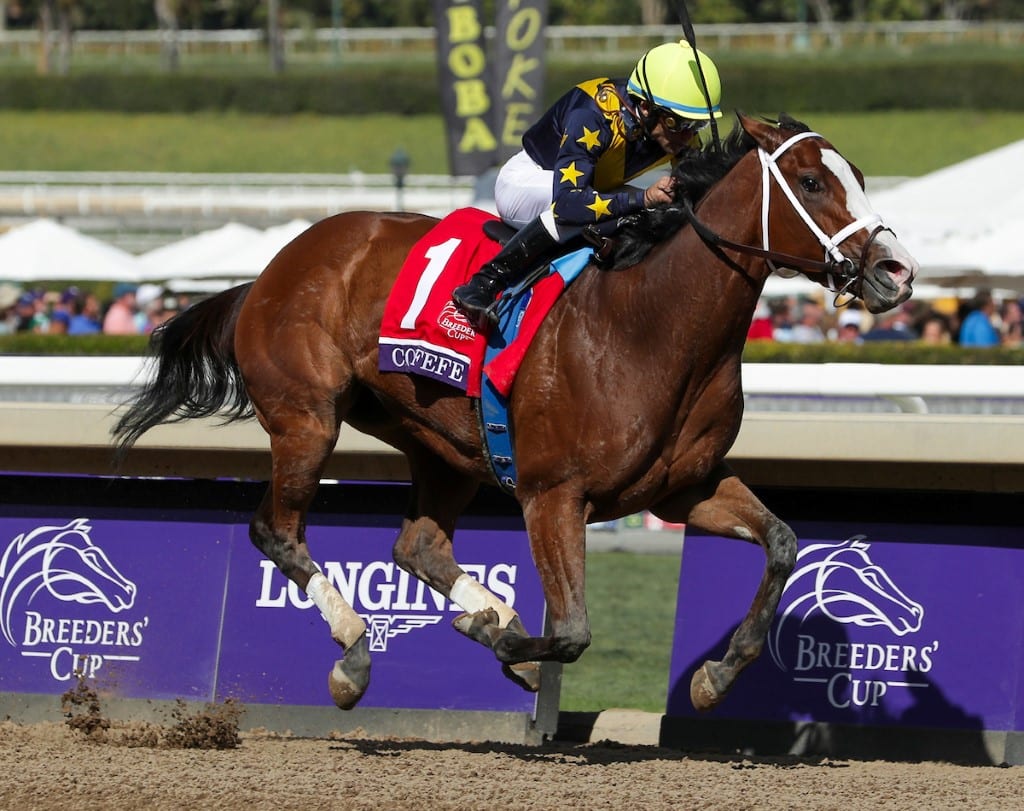 Some news and notes from Breeders’ Cup Saturday:

RED, RED WINE: Vino Rosso was an OK three-year-old — he did win the G2 Wood Memorial — but nothing special on the track. But he’s blossomed as a four-year-old and on Saturday rallied from fourth to run down favored McKinzie to win the $6 million Breeders’ Cup Classic by a widening four lengths. It was his second Grade 1 win of the year, both at Santa Anita, and he also was DQed from an apparent win in the G1 Jockey Club Gold Cup in his prep for the Breeders’ Cup. He’s trained by Todd Pletcher for Repole Stable and St. Elias Stable and was ridden to victory by Irad Ortiz, Jr.

BANNER DAY FOR PARX RACING: 10 horses that made their immediate prior start at Parx Racing ran on Breeders’ Cup Saturday, with the best outcome belonging to Spun to Run, who scored a 9-1 upset in the $1 million Dirt Mile. Irad Ortiz, Jr. piloted Spun to Run’s front-running score for trainer Juan Carlos Guerrero and owner Robert Donaldson. The Parx-based Spun to Run had won the Michael P. Balezzi Appreciation Mile Stakes at his home track in his prior start and also owned a win in the G3 Smarty Jones over the strip. Other top efforts by horses whose last prep came at Parx included a runner-up finish by Bellafina, who was fourth in Parx’s G1 Cotillion last out, in the Filly and Mare Sprint and a third-place finish by Serengeti Empress (sixth in the Cotillion) in the Distaff.

COVFEFE!: Covfefe. Apparently that means “really fast, as in, really, really fast, like, wow” in whatever language Pres. Trump was speaking when he tweeted that mystery word. The three-year-old Into Mischief filly, who’d shattered Pimlico’s track record for six furlongs earlier this year, took down the Filly and Mare Sprint Saturday by a half-length in 1:22.40 for seven furlongs. She’s trained by Brad Cox for LNJ Foxwoods.

OH, NO: Mongolian Groom, a four-year-old Hightail gelding, suffered an injury to his left hind leg during the running of the Classic, was vanned off, and subsequently, on the advice of veterinarians, humanely euthanized. “The death of Mongolian Groom is a loss to the entire horse racing community,” Breeders’ Cup said in a release. Mongolian Groom was trained by Enebish Ganbat for owner Mongolian Stable, who’d purchased him as a two-year-old in training.

AND, YES, A BLACK EYE FOR RACING: In the wake of a highly publicized spate of breakdowns at Santa Anita earlier this year, many in racing believed that Breeders’ Cup should move its event elsewhere in 2019, given the harshness of the spotlight on the storied track. Breeders’ Cup declined to do so, and with changes to the track and numerous other safety protocols put in place, the event nearly went off flawlessly. Nearly; the death of Mongolian Groom came in the final race of the two-day event. Those who’d been concerned about the harsh spotlight now look prescient; nine of the top 10 results in a Google News search for “Breeders’ Cup Classic” focus on or at least mention the death of Mongolian Groom.

YOU’VE GOT TO BE KIDDING WITH THIS: As of Sunday afternoon, Breeders’ Cup had posted releases about 13 of the 14 Breeders’ Cup races on its website. It had not yet managed to upload one about the Classic.

LADIES DAY: In addition to the several distaff races, the fairer sex did just fine against the boys on Saturday. The mare Belvoir Bay sped to the lead early to win the $1 million Turf Sprint, and in the $2 million Mile, the mare Uni rallied to win by a length-and-change over the filly Get Stormy. And in the Classic, the five-year-old mare Elate was a clear fourth.

BRICK BY BRICK: The best horse in training right now is the turf monster Bricks and Mortar. The Giant’s Causeway horse capped off a six-for-six campaign with a hard-fought win in the Turf under – yes, of course – Irad Ortiz, Jr. He’s trained by Chad Brown for Klaravich Stables and William Lawrence.