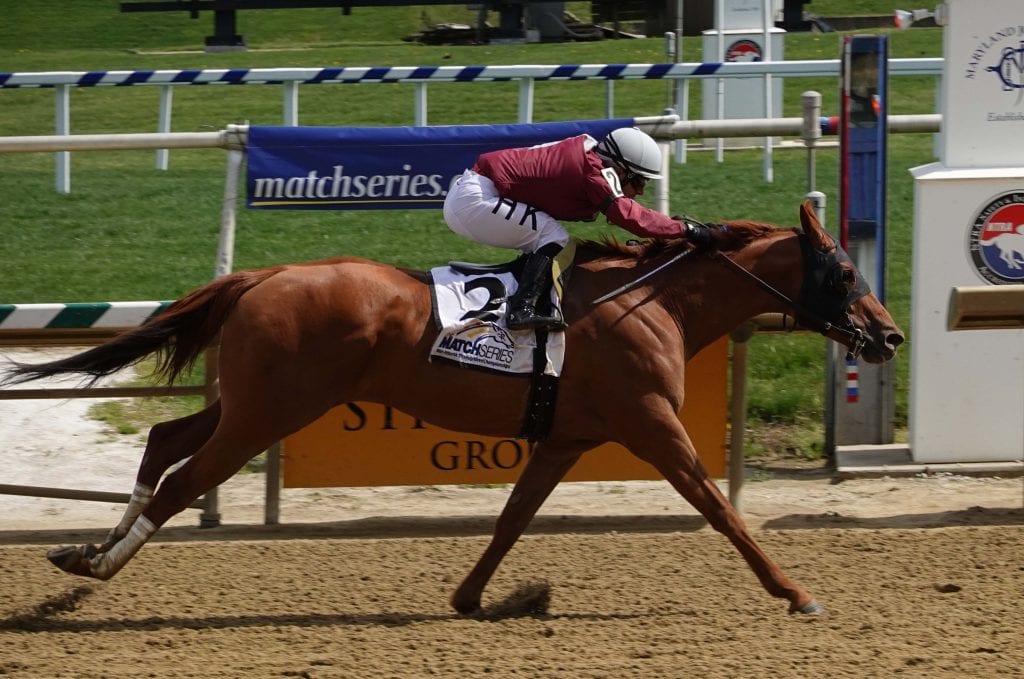 Hillside Equestrian Meadows’ Laki has come a long way since his first start, when he trailed throughout and finished last of 10 at 41-1 in a $25,000 maiden-claiming race at Laurel Park in early November 2016.

On Christmas Eve that year, Laki, then a 3-year-old, quickly erased his debut effort with a five-length win at 19-1 in the same class under new rider Horacio Karamanos. And from that point on, the Maryland-bred son of Cuba has been nothing but a success for his owner and the family of trainer Damon Dilodovico.

With the 2019 MATCH Series set for its championship leg Sept. 28 at Monmouth Park, Laki is poised to become the only return division winner from 2018 to win it again. The gelding captured the 3-Year-Olds and Up Sprint—Dirt Division last year and is expected to compete in its final leg, the $100,000 Mr. Prospector Stakes at six furlongs.

In 2018 Laki raced in all five division legs and amassed 32 points, which put him three points shy of the overall championship.

“He’s doing well, and if nothing silly happens, he’ll be at Monmouth,” Dilodovico said.

In MATCH competition this year, Laki won the Frank Whiteley Stakes at Laurel Park, finished fourth in the Chocolatetown Sprint at Hollywood Casino at Penn National Race Course and third in the Bensalem Stakes at Parx Racing. He skipped the Hockessin Stakes at Delaware Park because of lingering concern over strangles cases but in retrospect that decision didn’t impact his chances at another title.

In 21 career starts, Laki has eight wins, three seconds and five thirds for earnings of $463,532. He is a four-time stakes winner, is multiple graded stakes-placed, and a victory in the Mr. Prospector would put him over the $500,000 mark in earnings.

The 6-year-old gelding won his division last year with a strong second-place finish in the Grade II Frank J. De Francis Memorial Dash at Laurel, where he is based. Earlier this year he was third in the Grade III General George Stakes, also at Laurel.

“For racing against the quality of horses he has faced the last two years, it really has been pleasure with him,” Dilodovico said. “He’s just a professional—he doesn’t get upset about anything. Horacio has done a good job working with him, which has helped.”

Dilodovico recently cleared the 700 mark in career victories and $15 million in earnings. His wife, Christine, manages the stable with assistance from the couple’s sons, Damon Jr. and Nicholas. Laki can be a bit quirky, Dilodovico said, but gets the job done on the racetrack.

“He’s not that personable,” Dilodovico said of Laki. “But my wife—she’s his ‘human,’ the one he allows to be with him. Otherwise, he just does his thing.”

Hillside Equestrian Meadows is a Connecticut riding academy owned and operated by Buck Kalinowski, who is also an author. Laki is the operation’s only horse to have raced over the past four years.

Laki, out of the Swear by Dixie mare Truthful Dutch, was bred by Tom Michaels and Lorna Baker, who last year won a $5,000 bonus from the Maryland Horse Breeders Association because Laki was the top Maryland-bred colt or gelding by total MATCH Series points. The Bakers will receive the same bonus this year as Laki is by far the leading points-earning Maryland-bred male in the series.

A MATCH division championship is worth bonus money of $20,000 for the owner and $15,000 for the trainer. For the overall champion—the horse with the most points regardless of division—the owner receives $50,000 and the trainer $25,000 on top of division bonuses.

The overall championship will come down to the $100,000 Regret Stakes (Filly and Mare Sprint—Dirt Division), where Jim Reichenberg and Cash is King’s Ms Locust Point (31 points) and 2W Racing’s Bronx Beauty (25 points) are expected to square off for a fourth time this year.

Entries for the four MATCH Series stakes will be drawn Wednesday, Sept. 25. First post time at Monmouth on Sept. 28, the final Saturday of the 2019 meet, is 1:15 p.m. EDT. Admission and parking are free for the remainder of the meet.