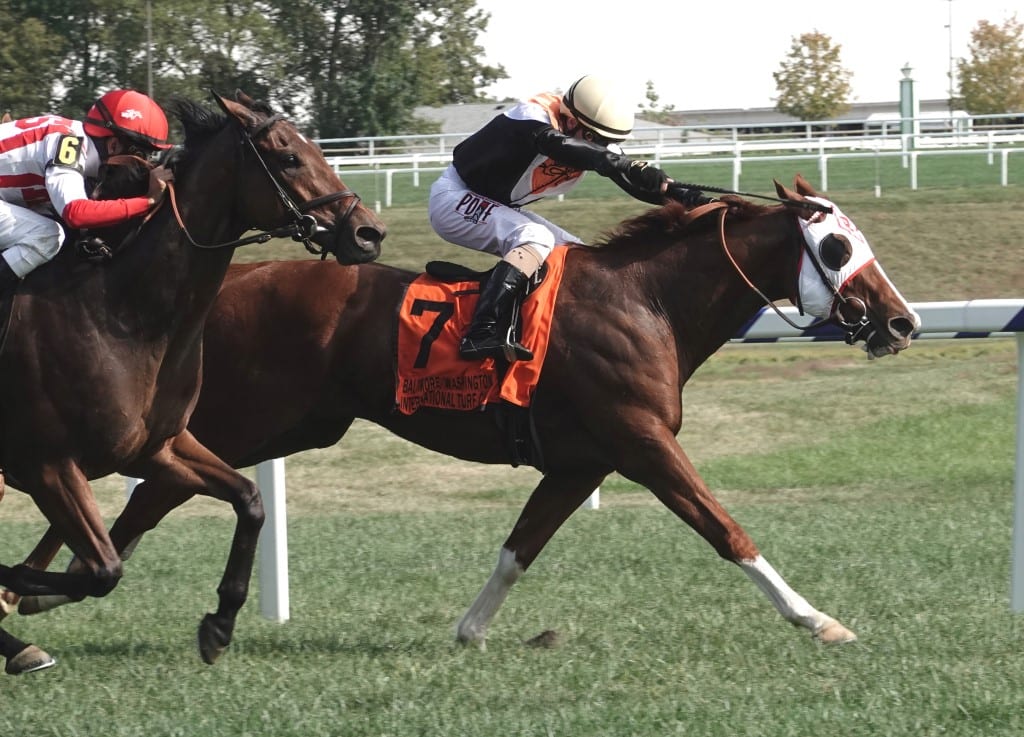 “He was at Fair Hill in the round pen eating grass, so that’s good,” Bernick said. “He ran very well. He had won in West Virginia and ran very fast. We were kind of pointing for that race. He might have moved a little early and pulled himself up a touch yesterday, but he won very well.”

Caribou Club raced ahead of one horse in the seven-horse field for a half-mile in the BWI Turf Cup, settled behind fractions of 23.57 and 46.39 seconds, before moving up three wide and between horses on the far turn. Angled out further by jockey Feargal Lynch, he came with a sustained run through the stretch, gaining a short lead inside the sixteenth pole and persevering to the wire to win by a head.

“I don’t know what it is. He’s won a stake as a 2-year-old, 4-year-old and 5-year-old now at Laurel,” Bernick said. “They usually have a pretty good pace there and he can get into a rhythm and then quicken. He likes it there. It’s got sort of tight turns. He’s been lucky that the turf course has been firm when he’s run there; he likes that.”

Caribou Club has had similar success at Santa Anita, site of this year’s Breeders’ Cup Nov. 1 and 2. In addition to the Joe Fernandez, he won a 2017 allowance and was third by less than a length to champion Stormy Liberal in the 2018 Eddie D (G3), all over its downhill turf course.

For his career, Caribou Club owns nine wins, two seconds, four thirds and $673,427 in purse earnings from 21 starts. Bernick is considering the Breeders’ Cup Mile (G1) as a late-season goal, which would mark Caribou Club’s first time at the event.

Glen Hill Farm has had 11 Breeders’ Cup starters, winning the 1994 Distaff (G1) with millionaire One Dreamer in her career finale.

“His record at Santa Anita is great,” Bernick said. “Our plan was to run him in the Turf Sprint when it was downhill, but they’re not running it down the hill this year. He could go for the Breeders’ Cup Mile.

“I think his numbers stack up, but he hasn’t won a Grade 1 or anything so he’d need to be lucky to get in, but I’d feel real comfortable running him in that race just because of his record at Santa Anita,” he added. “He set track records his last two races on firm turf, so he’s pretty fast. We’d probably take a chance there.”