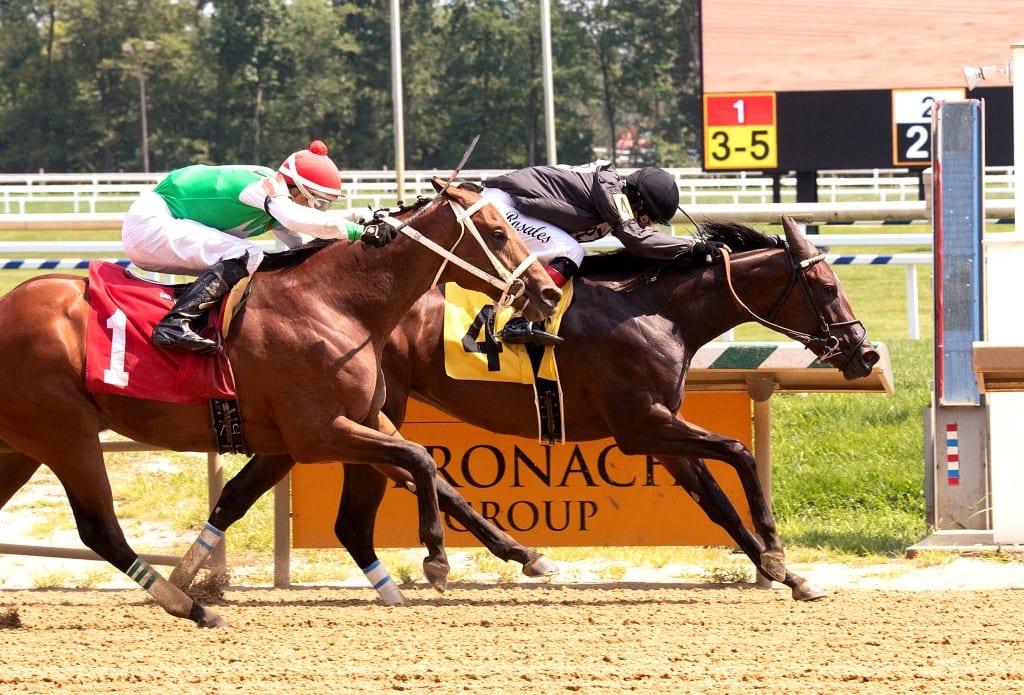 The story of trainer Phil Schoenthal’s son Emerson, the transplanted heart that beats in his chest, and the horses named for the boy, the heart, and the little girl who was the donor is one of the most compelling in racing this year.

But Schoenthal says he’s hoping for a big effort Saturday evening from Gifted Heart in the $100,000 Dickie Moore Stakes at Charles Town Races for a different reason.

“I would be tremendously thrilled for the ownership group” were the juvenile filly to win, he said. “The main owner, Jim Rashid, has been with me a long time and has had a lot of claiming horses. If you ask him, he’s going to the Breeders’ Cup Saturday night.”

And he’s not going just to go. Rashid, who co-owns Gifted Heart along with Linda Walls, Rick Wallace, and Schoenthal’s own Kingdom Bloodstock operation, is going with a horse who looks to be a major player.

Gifted Heart is two-for-two in her brief career, and in her last start, she beat the boys, including the highly regarded Mischevious Alex, in an allowance contest. Mischevious Alex returned to be third, beaten less than a length, in the $100,000 Sapling Stakes at Monmouth Park.

“She’s doing good,” the trainer said. “I’m really pleased with her. I think she’s run against some quality animals and beaten them.”

The last-place finisher from that allowance race, So Street, returned to win on the turf at Colonial Downs and then to run second in the Rosie’s Stakes at that track.

One subplot of the Dickie Moore figures to be its potential impact on next month’s Maryland Million. Gifted Heart, by Super Ninety Nine, is the 9-2 fourth choice in the field of eight. And another Maryland-sired runner, Stickingtogether, is the 7-2 second choice.

Stickingtogether broke her maiden by seven lengths last time out, and that race has produced two next-out graduates. Four of five to run back have finished in the exacta.

“We should get a good read on the Maryland Million,” Schoenthal pointed out.

But of course, there’s more to the race than that. Saturday’s Dickie Moore Stakes – named for the man who’s spent more than five decades working at Charles Town and the now-defunct Shenandoah Downs – has attracted an eclectic group of eight two-year-old fillies for the seven-furlong contest.

The favorite, Josie (5-2), is a Brad Cox-trained daughter of Race Day who went for $170,000 at auction and broke her maiden at second asking at Churchill Downs. She most recently was second at 3-10 odds at Ellis Park.

And trainer John Servis will send out Colby (4-1), who broke her maiden second time out at Monmouth Park in a race that’s produced two next-out winners. She went for $440,000 at auction.

Those prices help to emphasize the solid return on investment that Gifted Heart’s owners have received from the $20,000 purchase at last fall’s Fasig-Tipton Midlantic Fall Yearling Sale in Timonium.

Schoenthal will leg up local rider Arnaldo Bocachica on Gifted Heart, a purposeful move to use a skilled rider with extensive experience over the strip. But he admits to being uncertain whether his charge will take to night racing, or the Charles Town bullring.

“How do you decide if any horse is going to like it?” he asked with a laugh. “I’m not that smart.”