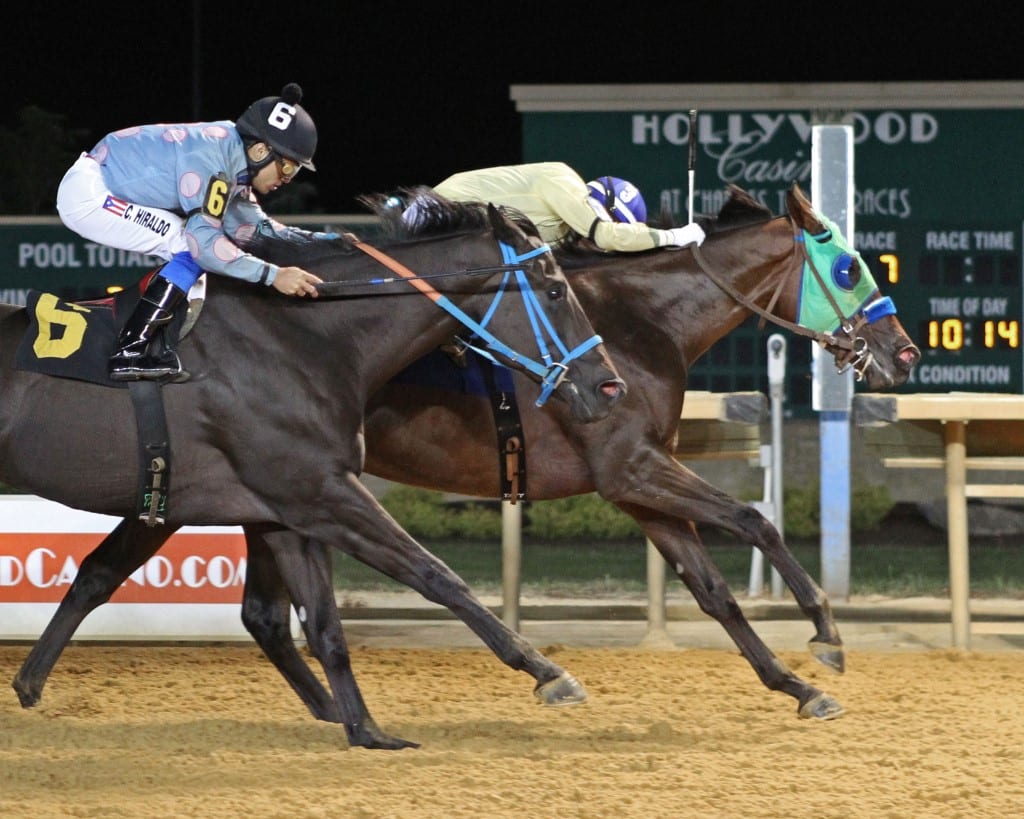 K Town Brass held off Rush to the Castle to win the Leavitt. Photo by Coady Photography.

The West Virginia Breeders Classics is just around the corner, a point that was driven home on a muggy night when Charles Town Races hosted the latest renewal of the $50,000 Robert Leavitt Memorial for state-bred three-year-olds.

And on a night when trainer Jeff Runco was absent — off to Colonial Downs to saddle barn star Lewisfield to a second-place finish in the Chesapeake Stakes — it was nevertheless the Runco-trained K Town Brass who posted a determined score in the Leavitt.

Some of the drama surrounding the Leavitt was diminished when Loving Touch, the undefeated full-brother to state-bred star Runnin’toluvya was scratched. But trainer Tim Grams would eventually saddle the lukewarm 5-2 post time choice, Cayenne Creek, while trainer James W. Casey sent out 3-1 second choice Rush to the Castle, an undefeated son of Windsor Castle, and 7-2 third choice, Hero’s Man, third in his lone setback in four tries.

K Town Brass went postward as the 4-1 fourth choice in the field of eight, but that proved to be the only all time all night he was behind horses.

When the gates opened in the Leavitt, K Town Brass, Hero’s Man, Rush to the Castle and Cayenne Creek all showed speed passing the finish line the first time, with K Town Brass getting the lead along the inside while several paths off the fence.

Cayenne Creek endured a very wide journey on both turns and would not be a factor in the final quarter-mile.

K Town Brass and Rush to the Castle were on virtual even terms down the backside and through the far turn as they turned the Leavitt into a match race. For an instant, Rush to the Castle appeared destined to go by and keep his unbeaten record in tact, but K Town Brass responded to vigorous urging from jockey Arnaldo Bocachica and dug down in the lane to score by a neck in 1:25.97 for the seven panels. Casey trainees Rush to the Castle and Hero’s Man finished second and third, respectively, while Boaster, also trained by Runco, took home fourth money.

“The last time I didn’t let him go to the front and he was fighting me the whole time and he just didn’t go on like we expected,” Bocachica said, referring to an allowance race on August 2, when K Town Brass finished second to the absent Loving Touch. “Today [Runco] told me to let him go to the front and try to keep him one or two paths off the rail. I didn’t want to be too far off the fence because I didn’t want anyone to rally inside me. But I stayed in the two path and then he dug down when [Rush to the Castle] come to me. He was really good. I was glad he got a stakes win.”

K Town Brass won at first asking back on May 30, but was fourth as the 6-5 favorite in his subsequent start. He rebounded to win an allowance on July 12 before running second to Loving Touch on Aug. 2. His victory in the Leavitt was his third triumph in five tries and nearly doubled his earnings to $65,355. Rush to the Castle was game in defeat, his first setback in three tries, while Hero’s Man was a good third in his second straight defeat after taking his first three starts for Casey.

In the race that preceded the Leavitt, Golden Desire (Keimar Trotman) recorded her first win in seven tries this year when she rallied from just off the pace to overhaul Aye Fancey in the lane to a two-length score as the 4-1 third choice in a one-turn allowance dash for state-bred fillies and mares. A four-year-old daughter of Windsor Castle owned and trained by Crystal Pickett, Golden Desire now owns a 3-5-2 slate and $72,000 banked from 20 career tries while covering the 4 1/2 furlongs in 52.15, notching just the second win in 16 starts over the CT strip.

One race earlier in an otherwise nondescript maiden $12,500 claiming event for state-bred fillies and mares, Yodel Lady used a similar closing kick to overhaul Corky Cowgirl in the lane for a length score while getting the seven panels in 1:29.44. It was the first win in 10 starts this year for the three-year-old daughter of Swiss Yodeler trained by Joe Stehr, but may have even more meaning for jockey Jason Simpson.

Simpson had lost 100 straight races to begin the campaign. But he ended that prolonged drought with a win on Thursday night’s card, added a second win Friday night, and then completed the hat trick with Yodel Lady. Overall, he’s now won three of seven.

Simpson noted that he idolized the late Garrett Gomez and learned a great deal competing against the Ortiz brothers and Luis Saez in Florida and New York earlier in his career.

“I just work hard and keep going,” said Simpson, who owns 45 wins and over $750,000 banked from 883 career mounts. “I love riding. It’s all I want to do. I just tried to keep my head up. I knew I would get on another winner some day. The trainer [Joe Stehr] had confidence in me tonight. He told me to let her settle then put her on the lead turning for home. That’s what I did and it felt good winning.”