Racing analysts often talk about fast quarter-miles. Sometimes it’s the opening quarter-mile of a sprint, while at other times they’re crowing about a fast final quarter-mile.

While those portions of a race are important, the shrewd players in the business use the “hidden” quarter-mile to spot future winners and value plays. That hidden quarter is the middle quarter mile clockings in races from seven furlongs and longer on dirt and turf.

Sharp handicappers and bettors pore over fractional times, looking for those strong “middle of the race” performances through fast middle quarters than are often overlooked by the general betting public.

Take Saturday’s Kent Stakes for example. The opening half mile was run in a relatively slow :49.48 but they ran the middle quarter in a solid :24.13; that was the fastest of the first three quarters. They then finished up the race in a sharp 35.65 for the last three-eighths (11.36 for the final furlong).

One horse in that race, Surf and Turf (one of our horses to watch horses this week) made up a length-and-a-half in that third quarter, according to Equibase charts, which means he ran a sub :24 quarter mile while advancing to a threatening position turning for home. He didn’t quite kick on from there — running evenly through the lane — but that sharp move through the middle portions of the race point him out as a horse to keep an eye on.

Players should take into consideration that some tracks, be it turf or dirt, are just faster than others.

But fast middle quarters (sub :24 quarters are even more impressive) and following horses who make up ground through those blistering “middles” can give a smart player a list of runners sitting on top efforts. 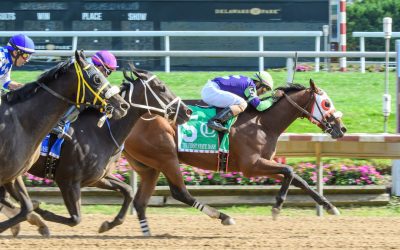