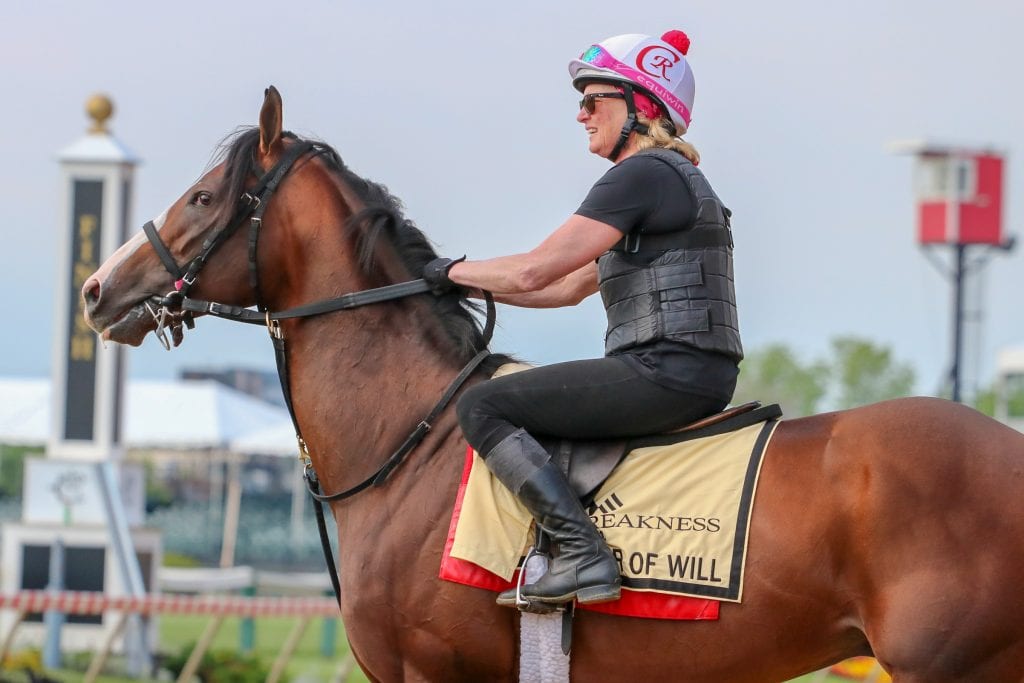 War of Will at Pimlico before the 2019 Preakness. Photo by Dottie Miller.

A random grab bag of thoughts and observations on the weekend’s action at Belmont Park.

Tacitus is the (slight) morning line favorite for Saturday’s Grade 1 Belmont Stakes, the final jewel in the sport’s Triple Crown. He’s won three of his five career starts, his other two having been his career debut and his most recent start, the Kentucky Derby, in which he finished fourth and was elevated to third via disqualification.

He’s traIned by the Hall of Famer Bill Mott and based right there at Belmont Park, so he’ll have all the comforts of home come Saturday. And he’ll have regular pilot Jose Ortiz, one of the top young riders in the game, in the irons.

So why won’t he win?

Let’s go back to the Derby. A quarter-mile into that race, he was in 15th place, 10 ½ lengths behind the leader. He kept on grinding all the way around, to eighth, then seventh, and finally fourth, 3 ¼ lengths back. And then of course, Maximum Security was DQed to 17th, elevating him to third.

You’d think that running style would be perfect for the Belmont. If he made up ground in the Derby, just think what he’d do with another quarter-mile in front of him!

Except it doesn’t generally work out that way. From 2000 through 2018, 20 runners in the Kentucky Derby were at least 10 lengths behind and closed to finish in the triple.

Sixteen of those have started in the Belmont. Their combined record: 16:0-2-3.

Of those, six went off at 5-2 or less, including Curlin (even money) and Exaggerator (7-5), among others; Curlin is the only one of that group to finish in the exacta.

Only two Belmont winners this century closed significant ground to get the money, Creator (9 ¾ lengths back after a quarter mile in 2016) and Jazil (11 ¾ back in 2006). Jazil, by the way, nearly was the exception to this rule; he closed from the clouds to be fourth in the Derby that year, just a length out of third.

NOT NEWS, BUT AMERICAN PHAROAH WAS PRETTY, PRETTY GOOD

When American Pharoah won the Belmont Stakes in 2015, the racing world swooned for the first Triple Crown winner in 37 years.

In a strange way, the enormity of the Triple Crown win overshadowed a terrific Belmont Stakes effort, in which American Pharoah led throughout and pulled away to a 5 ½-length victory in 2:26.65 for the 10 furlongs.

The time was the second-fastest recorded in this century, trailing only Point Given’s 2:26.56. And the margin of victory was the third-largest, trailing Point Given (12 ¼ lengths) and Afleet Alex (seven).

What’s more, American Pharoah ran what in the running world they call negative splits; his final six furlongs went in 1:13.24 — a touch faster than the 1:13.41 he traveled the first three-quarters.

CHAD’S WORLD, AND WE’RE JUST LIVIN’ IN IT

By now, if you watch much racing, you’re pretty much used to seeing Chad Brown’s poker face in the winner’s circle after big races. And this weekend might provide several more such visuals.

On Friday he’ll send out:

For those of you keeping score at home, that means Brown will send out the morning line favorite in four different graded stakes, and the second choice in three.

Nice work if you can get it.

SPEAKING OF NICE WORK, OR AT LEAST WORK

The final race of the 13-event card is the Grade 2 Belmont, contested at 1 ½ miles on the main track – you know, the same distance as the Belmont. We’re curious to see if running a graded stake as the finale makes anyone pay attention to it or stick around for it; we’re guessing not, but, hey, you never know.

MADE IN THE MID-ATLANTIC

A number of horses bred in the Midlantic region will try their luck in stakes events on Saturday’s Belmont card. Those include: