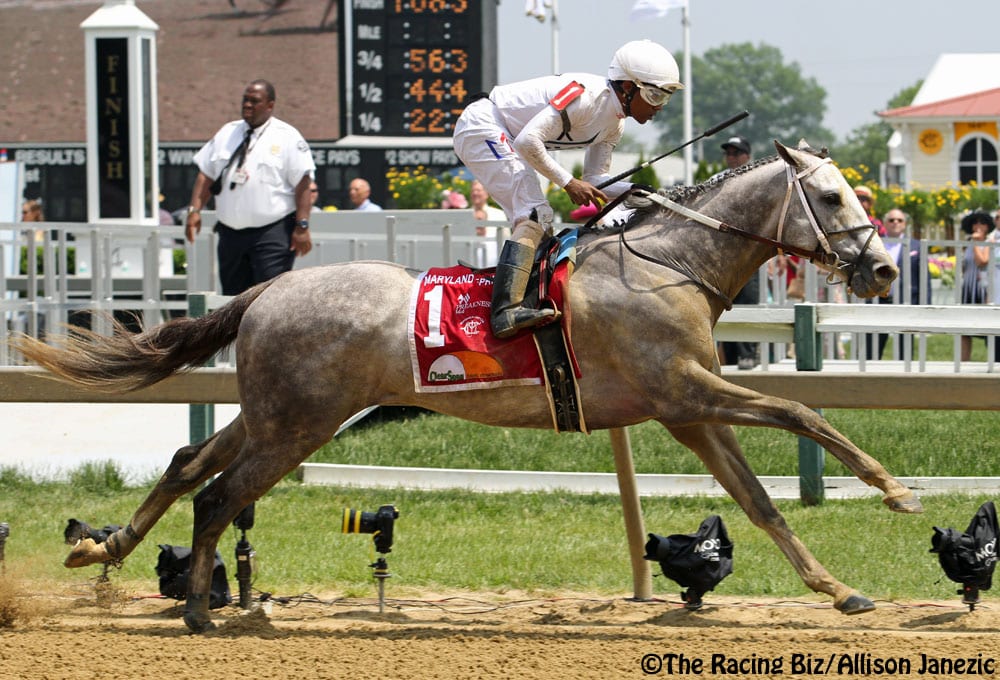 Set up perfectly by dueling leaders, New York Central  sat in a stalking position along the rail and when given his que, excelerated in the lane to a one-and-three-quarter length victory in the Grade 3 Maryland Sprint. Sent off as the co-third choice at 2.30-1, the gray son of Tapit needed to recover from a bobble at the break to get the ground saving trip, stopping the timer at 1:08.74 for the 6 furlongs over a fast track on Preakness Day at Pimlico.

Lewisfield (2.30-1) was away alertly then shortly joined by Wentz (2.20-1) who remained at his rivals shoulder through quick early fractions of 22.65 and 44.84. Beneficiaries of the speed duel was the eventual winner who hugged the rail throughout and runner-up Proforma (3.10-1) who took a three-wide route from the quarter pole to the wire, travelling much more ground than New York Central which may have been the difference in coming up short of the victory.

The two longest prices in the six-horse field, Fellowship (22.60-1) and Parade of Nations (32.60-1) were never a threat, racing and finishing fifth and sixth, respectively.

“He got a clean break. That’s what we were worried about, because sometimes he doesn’t break. I just had patience that the rail would open. I know my horse. He’s a fighter and he’ll go through. As soon as I aksed him, he went through.

I had plenty of horse at the three-eighths [pole]. I just wanted to have plenty of patience to make the right move. I didn’t want to move too early. This is a long stretch. I just had to have a little patience, and thanks to God we took the win.”

“He had a little bit of an issue after the Pat Day Mile [on KY Derby Day last year], so we turned him out and were real patient with him. and it’s paid off. He’s come back great and Steve [Asmussen, trainer] felt like this was a perfect spot for him. He did a great job.”

When asked if New York Central would continue to sprint or stretch out, Walden replied, “I think he’s a one-turn horse. He ran very well in the Pat Day Mile to be second at a mile around one-turn. The way he was able to just sit behind the pace and then kick like he did, they ran fast, so it was a big race.”

Post Time 2.20-1 favorite Wentz slightly hesitated at the break which caused rider Joel Rosario to rush him early to engage Lewisfield down the backstretch. These two travelled as a team into the far turn clocking 22.65 first quarter and equally fast 44.84 half mile. Wentz was all out to remain on even terms with the leader but used to much energy too early to finish strong.