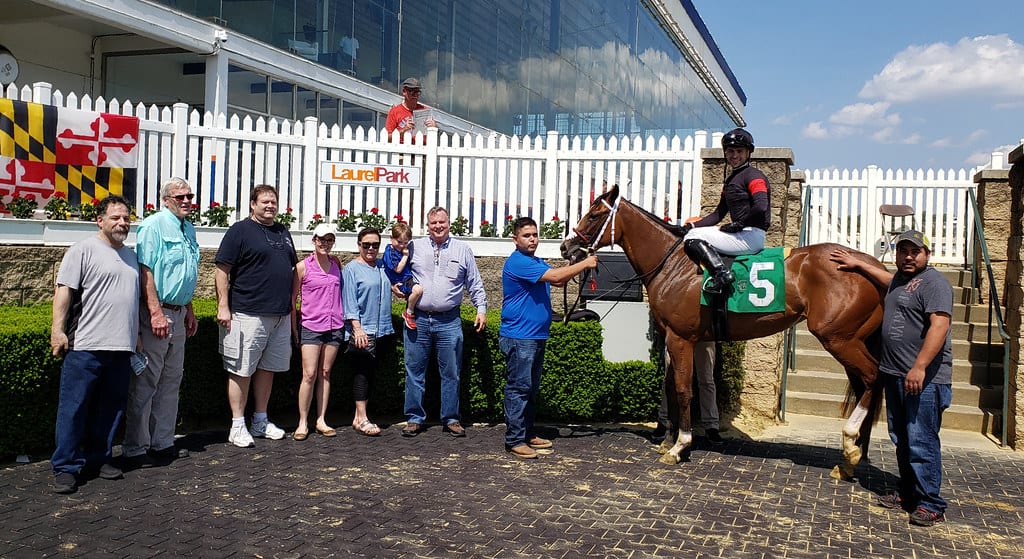 Trevor Johnson, Dan Slattery and Jeremiah O’Dwyer’s Punk Rock Princess broke her maiden May 2 in her second start to become the first winner for her sire, Bourbon Courage.

Punk Rock Princess, trained by Jeremiah O’Dwyer, is the first starter for Bourbon Courage and ran second on debut at Laurel Park April 18th in a field that went 4 ½ furlongs in :51.28. With the experience of a race under her belt, Punk Rock Princess bumped with Gemagility leaving the gate but dug in for a battle to the wire with fractions of :22.75, :46.28 and a final time of :52.53 in the 4 ½ furlong race.

Punk Rock Princess was bred in Maryland by Thomas Teal out of My Little Monkey, by Old Trieste.

A colt by Bourbon Courage, now named Double Crown, was the first unofficial winner for his sire when he won at this year’s Aiken Trials in March.

Bourbon Courage, by Lion Heart out of the Carson City mare Shine Forth, won the Super Derby (gr. II) at 3 and retired with earnings of $1,129,187 with a record of four wins, six seconds, and six thirds in 25 starts, 18 of which came in graded stakes. He finished fourth in the 2014 Xpressbet.com Breeders’ Cup Sprint (gr. I) and also set a track record at Keeneland when he won in 1:15.38 for 6 1/2 furlongs. Bourbon Courage, who raced for Bourbon Lane Stable, also finished second in the Donn Handicap (gr. I) in 2013, third in the Cigar Mile (gr. I) in 2014, and third in the Clark Handicap (gr. I) in 2012. He stands at Anchor & Hope Farm in Port Deposit.