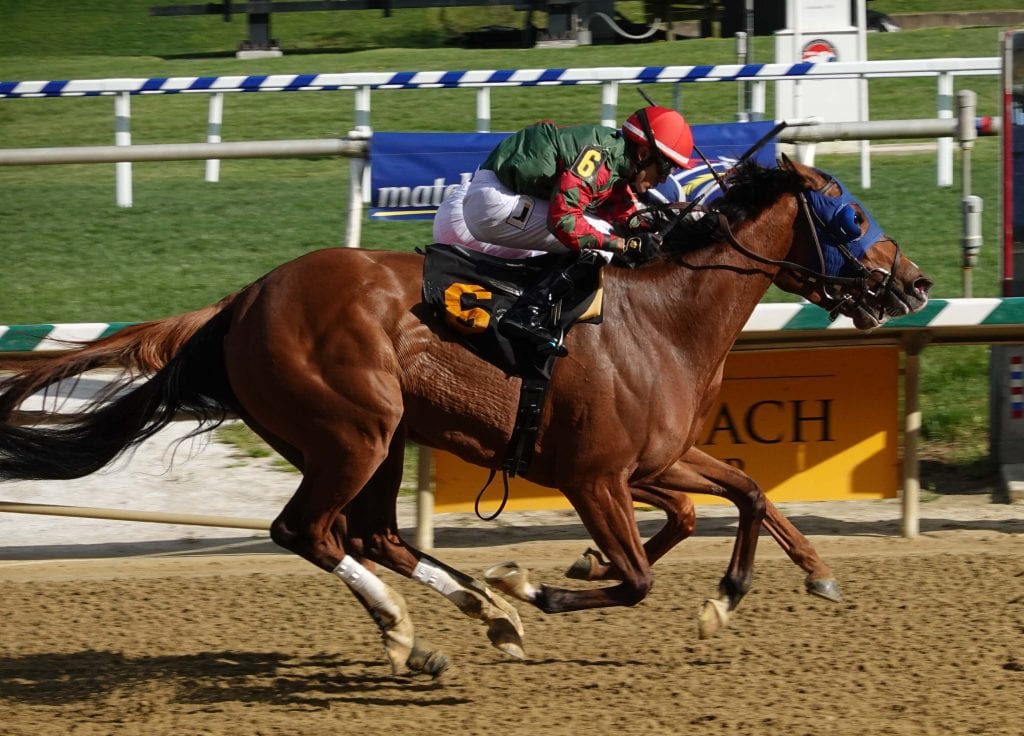 Las Setas beat Our Super Freak by a nose to win the Weber City Miss. Photo by Laurie Asseo.

Robert Manfuso, Wayne Harrison and trainer Katherine Voss’ Las Setas won a free entry into the $250,000 Black Eyed Susan (G2) with her victory in Saturday’s $125,000 Weber City Miss at Laurel Park, but the daughter of Seville had to earn it.

The Weber City Miss, an about 1 1/16-mile stakes for 3-year-old fillies, was a ‘Win and In’ event that offered the winner a free-entry into the Blacked-Eyed Susan at Pimlico May 17.

Las Setas, who was sent to post as the 4-5 favorite on the strength of three straight dominating victories at Laurel, tracked pacesetter Our Super Freak around the first turn and along the backstretch past half-mile fractions of 24.55 and 48.15 seconds. The Maryland-bred homebred filly moved alongside the pacesetter on the turn into the homestretch and was fanned very wide entering the stretch run. Our Super Freak, the 5-2 second choice ridden by Trevor McCarthy, made a strong bid for victory along the inside, but Las Setas kept battling and managed to prevail by a nose under Jevian Toledo.

“I don’t think my filly really needs to be on the lead. She’s been on the lead the last few times because there was no speed in the race. But we’ve been working her behind horses and schooling her and she’s fine,” Toledo said. “She really surprised me, that filly [Our Super Freak]. My filly is a really nice filly and she always gives me everything she has. I thought by the three-eighths pole my filly was going to open up really easy but the other filly is a fighter. She kept fighting with me all the way to the wire. Thank God, we got the job done.”

Las Setas ran the about 1 1/16-mile distance in 1:44.79 to capture her third straight stakes victory and fourth triumph since a sixth-place finish in her debut over a sloppy track Dec. 31.

Voss said she was “excited” about the prospect of Las Setas running in the Black-Eyed Susan on Preakness Stakes (G1) Weekend.

“Obviously, if everything goes well, that’s what we’d like to do next, but the water is much deeper there,” Voss said. “If she got a piece of it – it’s a Grade 2 – we’d be happy.”

Although thrilled with Las Setas’ development into a multiple-stakes winner, Voss isn’t surprised.

“She had shown us a lot of talent. When she was getting ready to race, I think she went 36 (seconds) the first time she went three-eighths. She was going 47 and 48 [for a half-mile] like nothing. I said, ‘Either this racetrack is too fast or I have a freak,’” Voss said.

Our Super Freak finished 4 ¾ lengths ahead of third-place finisher Pat’s No Fool.