Las Setas looks for third straight in Beyond the Wire 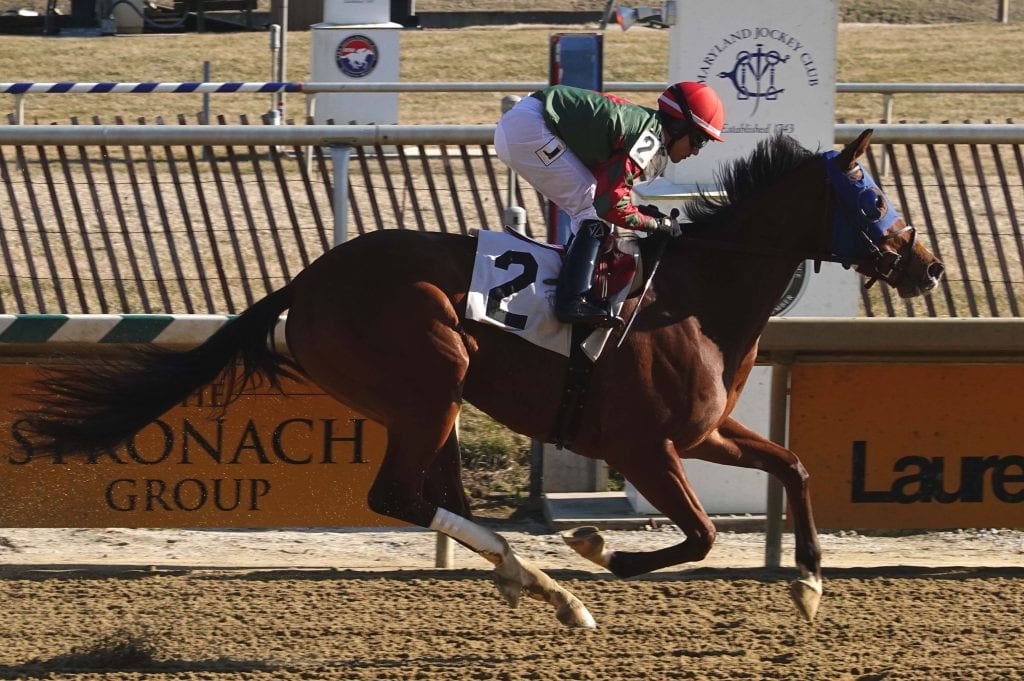 Robert Manfuso, Wayne Harrison and Katherine Voss’ homebred Las Setas, upset winner of her stakes debut last time out, figures to attract more attention as she seeks her third straight win in Saturday’s $100,000 Beyond the Wire at Laurel Park.

The 31st running of the one-mile Beyond the Wire for 3-year-old fillies, previously contested as the Caesar’s Wish until 2018, is among five stakes worth $450,000 in purses highlighted by the $100,000 Private Terms for sophomores. First race post time is 1:10 p.m.

Preceded by the seven-furlong Wide Country Feb. 16, the Beyond the Wire is the second stakes for sophomore fillies this winter at Laurel. It is followed by the Weber City Miss April 20, a ‘Win and You’re In’ event for the 95th Black-Eyed Susan (G2) May 17.

Las Setas, whose name is Spanish for mushroom, was a front-running 5 ½-length winner of the seven-furlong Wide Country, setting comfortable fractions of 23.20 and 46.15 seconds before opening up through the stretch. She was overlooked at 9-1 that day, coming off a maiden triumph Jan. 20, also at Laurel.

“She got a very slow number in her maiden race, so I think people needed to see more,” Voss said. “In her first start she was a little afraid of the other horses. She’s kind of easily flustered, and she was in the one-hole the day she broke her maiden so we kind of had to get going. In the stake, she was just cruising. They only went in 23 and one, which was fine. I think that’s an easy cruising speed for her.

“As far as being on the lead again, if there’s no speed, that’s where she’s going to be, but we worked her behind a horse last week and let her get a little dirt in her face,” she added. “I’m not one of those people that likes to send my horses to the lead. I like them to settle early, so we’ll just see how the race shakes out. [The mile] is a natural progression for her, and she certainly hasn’t done anything to make us not want to try it.”

Las Setas has breezed twice since the Wide Country, including a bullet half-mile in 47.60 seconds Feb. 28. Regular rider Jevian Toledo will be back aboard from Post 7 in the field of eight at co-topweight of 120 pounds.

“She’s been doing great, she really has. I wanted her to pick up a little weight since her last race and I think she’s picked up a little and she seems to be doing good. She’s had two nice works so we’re looking forward to Saturday,” Voss said. “She’s always shown us a lot. She’s got a terrific stride. She’s worked faster than any other horse I’ve had. I blamed it on the racetrack but then I thought maybe I just have a really good filly.”

Jagger Inc.’s Our Super Freak was second to Las Setas in the Wide Country, her third straight stakes placing at Laurel. The daughter of 2003 Horse of the Year Mineshaft was third in the seven-furlong Gin Talking and second in the six-furlong Smart Halo to cap her juvenile campaign.

“We’ve danced every dance so far in the series … so we’ll keep taking a stab at it. Every race they’ve offered, we’ve hit them all so I hope we’re due. She’s been running good in every one, she’s just been getting outrun is all. Maybe it’s her time,” trainer Jamie Ness said. “She’s a nice horse.”

Our Super Freak owns a win, two seconds and a third in four career tries at Laurel, capturing an entry-level optional claiming allowance by 6 ¼ lengths last fall. Overall, she has been worse than third once in seven races.

“She shows up every time and I expect she’ll show up again and do her thing. I’ve been waiting to stretch her out. This is a one-turn mile but I think the distance will be good for her so maybe that will give her a little help,” Ness said. “We’re trying to make her a distance horse so we’re trying to harness her speed a little bit. I think she’ll be a better horse down the road if she can go a distance of ground. We’re ready.”

“The last time she was right there at the top of the lane and had every opportunity to go on and catch the leader, and that horse in front got away with some easy fractions and just kicked away,” Ness said. “She was second-best on the day, so we’ll try again. We’re going to have to try and beat her again.”

Trainer Kiaran McLaughlin skipped the Busher Stakes at Aqueduct last weekend in favor of the Beyond the Wire for Leonard C. Green’s It Justhitthe Wire, a gray or roan daughter of champion Bernardini. She exits a gate-to-wire 5 ¾-length maiden special weight victory Jan. 27 over a sloppy, sealed track at Gulfstream Park.

“We just felt like the Busher was too tough, so we thought we would give her another week and try Laurel,” McLaughlin said. “She won at Saratoga first time and was disqualified, then she ran two subpar races with excuses. She won well last time out at Gulfstream and we decided to step her up in stakes. So, we’ll try the mile at Laurel and hope for the best. She’s a nice filly.”

The Beyond the Wire will be It Justhitthe Wire’s second try at a distance of ground, having finished seventh following a troubled trip in a 1 1/16-mile maiden event last fall at Belmont Park. She didn’t race again until her maiden triumph in South Florida.

“She’s supposed to get a mile, but we were a little disappointed with her mile and a sixteenth race before. We hope she gets the mile; usually Bernardinis do, but we’re not for sure,” McLaughlin said. “She’s had some excuses in two of her races, but she’s a nice filly and ready to run. She’s got a lot of quality.”

It Justhitthe Wire has shown versatility, winning on the front end and coming from off the pace in her career debut, where she finished first by a neck but was disqualified to third for interference. Winter meet-leading rider Trevor McCarthy will be aboard from Post 2.

“I like the clean face part of it where she won well last time, kind of on the lead and did it the right way,” McLaughlin said. “We’ll see how the race looks and how much pace is in there and play it by ear. We’re happy to have Trevor to ride.”

Rose Petal Stable’s Pat’s No Fool cuts back after finishing third in an optional claiming allowance going about 1 1/16 miles Feb. 22 at Laurel, where she broke a step slow and raced wide and wound up beaten 2 ½ lengths by Destiny Over Fate, who also returns in the Beyond the Wire.

The effort came just 19 days after Pat’s No Fool graduated with a 2 ½-length triumph going one mile at Laurel, the first start since her debut last August at Delaware Park for trainer Gary Capuano, winner of the 2014 Caesar’s Wish with Steady N Love.

“She only got beat a couple lengths last time. I think she’ll run well in there. She just didn’t have the best of trips in her last start. I thought that maybe she could have won the race, but she came out of it real good and she’s doing real good,” Capuano said. “She’s been training real good, so I expect another good effort from her.”