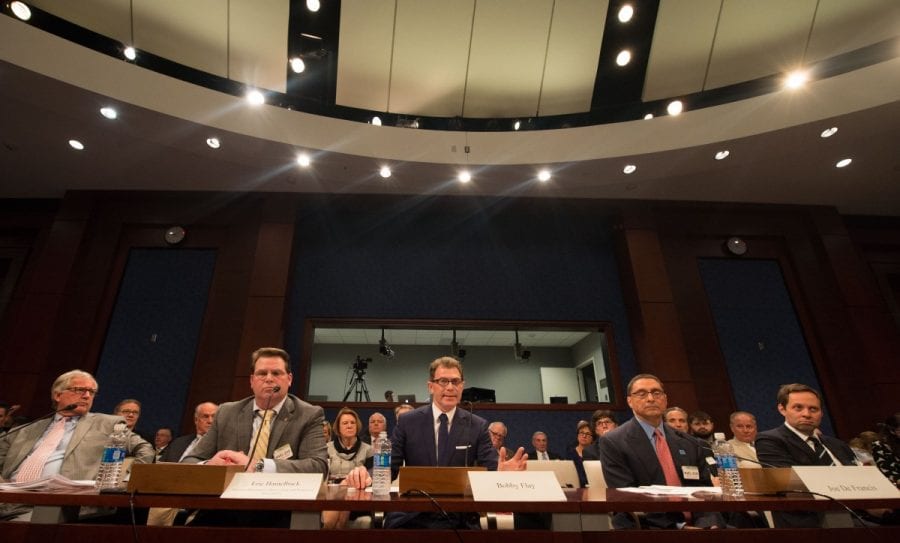 An earlier Congressional hearing found little consensus on the issues.

Reps. Andy Barr (R-KY) and Paul Tonko (D-NY) on Thursday announced the introduction of HR 1754, also known as the Horseracing Integrity Act of 2019.

They have introduced similar legislation in two prior Congresses, with familiar faces lined up for – including the Jockey Club and Water Hay Oats Alliance (WHOA) – and against. The latter group has included both major national horsemen’s organizations, the Horsemen’s Benevolent and Protective Association and Thoroughred Horsemen’s Association.

The bill, said Barr in a release, would help “to ensure the safety and integrity of this sport for years to come.”

The legislation would create a national nonprofit organization to control medication rules, testing, and punishment nationwide. It would also ban the use of any medication – including Lasix – within 24 hours of raceday.

“Horseracing thrives when we put the majestic equine athlete front and center” Tonko said. “Our legislation creates a set of nationwide rules that are clear, consistent, and conflict-free. This will make horseracing safer for our equine athletes and jockeys while increasing confidence in the sport among the trainers, owners, horseplayers, and horseracing fans alike.”

The 2017 version of the legislation garnered 131 cosponsors in the 435-member House of Representatives.

For advocates of such legislation, the timing may be fortuitous. Santa Anita Park, the Southern California track, is in the midst of a roughly two-week closure as it wrestles with a recent spate of 21 equine fatalities, a development that has drawn national news media attention. To make matters worse, the track reopened this week for training and, on Thursday, saw another equine fatality.

The Stronach Group, which owns Santa Anita, as well as Laurel Park, Pimlico, Gulfstream Park, and other facilities, supports the proposed legislation according to a fact sheet put out by Barr’s and Tonko’s offices. So, too, do the New York Racing Association (NYRA), the Breeders’ Cup, and the Thoroughbred Owners and Breeders Association.

“This is a horse-first bill. This bill will help ensure a safer environment for horses and riders at all tracks,” said Shawn Smeallie, executive director of Coalition for Horse Racing Integrity, which represents some of the bill’s most ardent supporters.

Aligned against them have been the two major horsemen’s groups, which represent rank-and-file horsemen around the country. The Association of Racing Commissioners International (ARCI) also has opposed the legislation, which, on medication issues, would effectively neuter state racing commissions.

Those groups argue that the National Uniform Medication Program, the initiative spearheaded by the Racing Medication and Testing Consortium, effectively – and more quickly and fairly – accomplishes what the Barr-Tonko bill seeks to do.

The pillars of that national program are third-party Lasix administration, laboratory accreditation, a multiple medication violation system, and a schedule of controlled therapeutic substances, which are, within guidelines permitted.

According to the RMTC, a dozen states, representing over 40 percent of national pari-mutuel handle, have adopted the program in full. Regionally, those include Delaware, Maryland, New Jersey, New York, Pennsylvania, Virginia, and West Virginia.

Eight other states have adopted three of the four pillars; that group, the RMTC said, includes California and Kentucky.

In addition, the ARCI has been pushing an interstate compact on medication issues, which, if widely adopted, would obviate the need for federal legislation, its advocates say.

Horsemen generally are also concerned about the legislation’s prohibition on the use of Lasix, an anti-bleeder medication in use in the overwhelming majority of racehorses in the United States, though generally not in use on raceday in most other jurisdictions.

And there are concerns about the constitutionality of the legislation, which, among other things, would effectively give the new “anti-doping authority” the power to tax industry participants to fund its programs.

And the jockeys? On the 2017 legislation, the Jockeys’ Guild took a middle-ground position, encouraging a legislative solution but pleading for an industry-wide consensus to emerge.