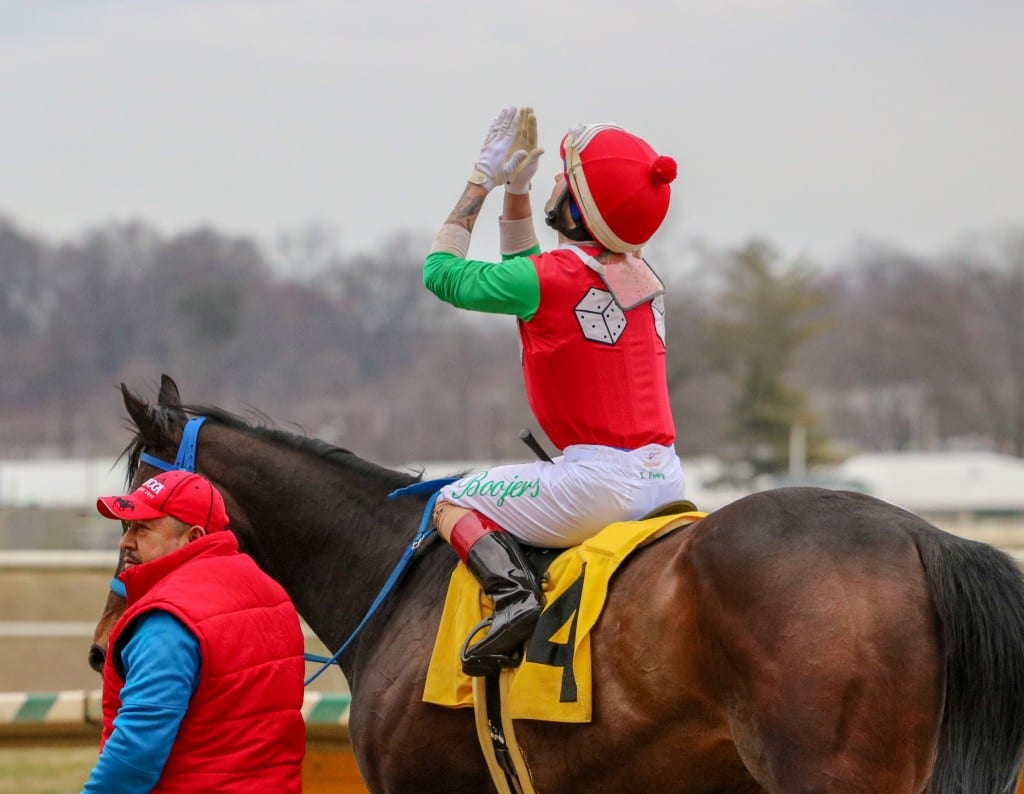 Anna’s Bandit won the Conniver Stakes for Maryland-breds in 2018. Photo by Dottie Miller.

Moments before he walked in to Thursday’s Maryland Racing Commission meeting, Dr. Michael Harrison, a veterinarian and president of the board of directors of the Maryland Horse Breeders Association (MHBA), put his signature to a document that will ensure the purse account provides a steady, dedicated stream of funding to Maryland-breds for the next five years.

“The agreement is a recognition by all parties that the bonus structure we’ve had in the industry has been instrumental in the revitaliztion of racing in Maryland,” said Harrison, who is also the breeder-owner of 2018 Maryland Million Turf champ Talk Show Man. “Continuity is critical, of course, too.

“To look down the road and say the bonus structure is going to be there, things are good; that’s a concern for everybody that’s investing in the business.”

The impetus for the agreement grew out of a glitch that arose in 2018, when the combination of planned stakes purses and breeder awards paid out of the Maryland-bred Fund threatened to put the Fund over budget — a status it cannot, legally, reach.

The sides hammered out an agreement signed last June that called for the MHBA to scale back some of its bonuses and the MTHA to contribute an additional $500,000 to the state-bred stakes program. The Maryland Racing Commission brokered that agreement, and it pushed for this one, as well.

Bowman, who said he has been in the Maryland Thoroughbred industry for nearly 50 years, called the efforts leading to the agreement the ” most pleasant, most cooperative negotiation” he’s seen in the industry.

“Good things don’t come easy, I guess is the expression,” Harrison semi-agreed. “Both groups got into working on it very quickly (after the Commission had requested they do so). We had several meeting between our groups, the MTHA and the horse breeders group, and we were able through that to go through negotiations.”

Still, in a business as unpredictable as the breeding industry, having enhanced — even if incomplete — certainty is a good thing.

“Hopefully, it will be something that people will look at and say there’s definitely stability, and there’s also really excellent cooperation between the respective groups,” Harrison said.

COMMISSION NOTES The Maryland Jockey Club sought and received approval from the Commission to implement the roulette wager currently available at Santa Anita and Gulfstream Park. The wager is a kind of simplified win wager in which the bettor chooses red, green, or black, and multiple horses are incorporated in each color. Officials expect the bet to become available in Maryland in time for the Pimlico meet.

The Stronach Group, MJC president Sal Sinatra said, “wants to really push it out with the InfieldFest kids (on Preakness day). It’s a very simple bet to try to get them involved.”

Sinatra said that the company had not yet decided on a takeout level, though he did allow, “The lower, the better.” Current takeout on win wagers in Maryland is 18 percent.