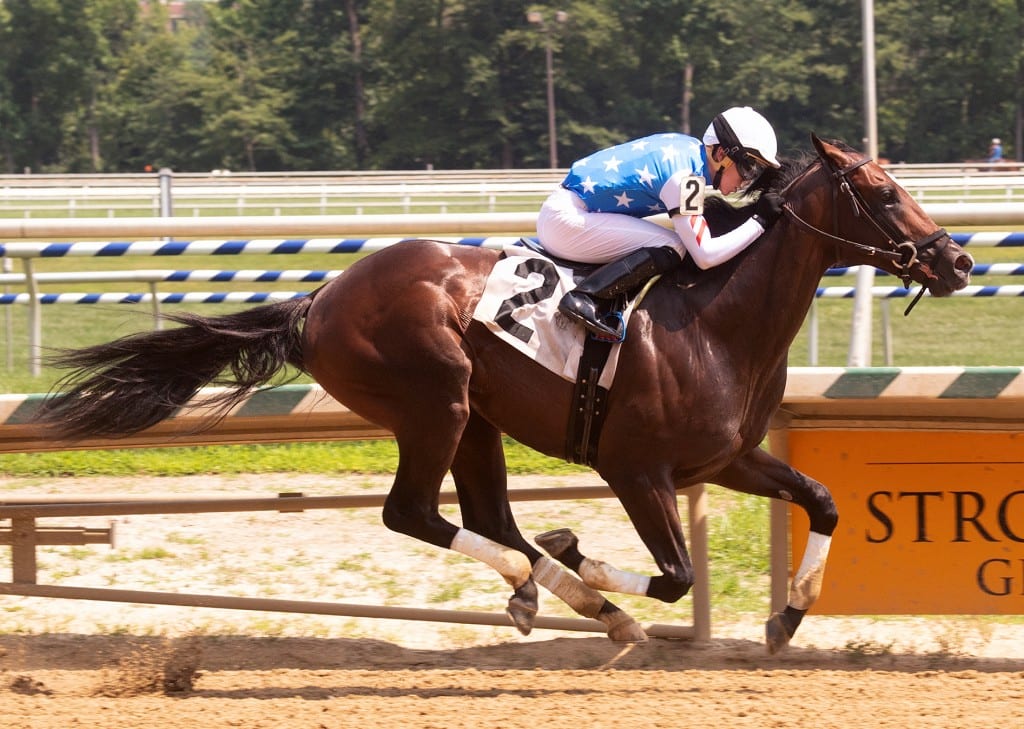 Runnymede Racing’s Alwaysmining, a winner of three straight including back-to-back stakes, will look to continue his upward progression as the 7-5 program favorite in Saturday’s $100,000 Miracle Wood presented by Blackwell Real Estate at Laurel Park.

The one-mile Miracle Wood for 3-year-olds and the $100,000 Wide Country for 3-year-old fillies at seven furlongs are among five stakes, two graded, worth $800,000 in purses on a 10-race Winter Carnival program that includes the $100,000 John B. Campbell presented by Fidelity First for older horses.

In his two most recent efforts, both at seven furlongs, the gelded son of multiple Grade 1 winner Stay Thirsty beat stakes winners Our Braintrust and Scrap Copper in his dirt stakes debut in the restricted Maryland Juvenile Futurity Dec. 8, then wheeled back in three weeks to beat favored Win Win Win in the open Heft Stakes.

The Heft performance was flattered when Win Win Win came back to romp by 7 ¼ lengths in the Jan. 19 Pasco Stakes in his subsequent start, setting a Tampa Bay Downs track record for seven furlongs.

“We ran back kind of quick into the Heft Stakes so I gave him a little extra time before we worked him and he has not missed a beat. We’re very happy with how he’s training. He’s always been a solid workhorse, but he just does it so easily, it’s impressive,” Rubley said. “He’s maturing and filling out a little bit. He looks spectacular, so we’re excited. He kind of told us that he didn’t need any more time, and he’s certainly trained forwardly out of the last race.”

Alwaysmining’s streak consists of three gate-to-wire victories, all under jockey Daniel Centeno, who flies in from Florida to ride from Post 2 at topweight of 122 pounds. In their only previous try at a mile, they galloped clear to a 10-length triumph over a sloppy, sealed track in an entry-level optional claiming allowance last October.

“It was impressive. We were obviously very happy with how he ran. I’ve always thought he was a nice horse, but you just don’t know until you get them out there. That certainly affirmed that we were looking at a nice horse and sort of guided us to point him to the Maryland-bred stake, and that’s how we’ve gotten to where we are today,” Rubley said.

“Honestly, it’s just worked out that way. It’s not been our mission to send him to the front,” she added. It’s just that he’s always been a little bit faster, and he manages to maintain that speed which has been very helpful. I don’t think he has to have the lead, but we’ll find out.”

The Miracle Wood is the first of Maryland’s stakes for 3-year-olds that continue with the Private Terms at about 1 1/16 miles March 16 and the 1 1/8-mile Federico Tesio April 20, a ‘Win and You’re In’ event for Triple Crown-nominated horses to the 144th Preakness Stakes (G1) May 19 at legendary Pimlico Race Course.

“We thought that this was an incremental buildup. We skipped the [G3] Withers [Feb. 2 at Aqueduct] because it was a mile and an eighth and I thought going from seven furlongs to a mile and an eighth was a bit of a stretch,” Rubley said. “This seems like the more logical placement for him at this time in his career.”

Gold Square’s Wendell Fong makes the leap from maiden to stakes competition in the Miracle Wood for trainer Jeremiah Englehart. The sophomore son of Flat Out captured his career debut Dec. 29 at Laurel, a six-furlong maiden special weight, in 1:10.82 under Jorge Vargas Jr.

“He ran pretty green that day. I thought Jorge did a good job of not giving up on him. A lot of times someone might have thought, ‘Well, he’s going to be second,’ but he just stayed after him the whole way,” Englehart said. “He got a little bit of dirt kicked in his face down the backside and kind of backed out on the rail and had to check a little bit but I just thought Jorge did a really nice job keeping him going.”

Wendell Fong has been working in blinkers for his stakes debut will wear them in the race, Englehart said. Though he will be stretching out another two furlongs and has a seasoning disadvantage, the trainer is excited about what his future holds.

“He was one that we thought would be early on and he just went through a lot of growth changes. He’s just one of those horses that took some time to get there,” Englehart said. “The one good thing about him is I think there’s a lot of room to improve off of that first effort. I don’t know how key that race is going to end up being. This is definitely a step up for him. Obviously there’s going to be a couple of horses in there that have run fast already but I think there’s a higher ceiling with him and that’s why we feel confident taking on this race.”

Wachtel Stable, Eclipse Thoroughbred Partners and Gary Barber’s Gray Magician will be making his seventh career start and first outside of California in the Miracle Wood. The Graydar colt broke his maiden by 9 ½ lengths at Del Mar to cap his juvenile campaign last November and is winless in two tries this year, including a fourth in the one-mile Sham (G3) Jan. 5 at Santa Anita, beaten three lengths.

Laurel Park’s leading trainer Claudio Gonzalez will send out BB Horses and MCA Racing Stable’s Tybalt for his third try in a stakes. Second in an off-the-turf edition of the five-furlong Tyro Stakes last summer at Monmouth Park, he was gelded following his 2-year-old finale and returned with a half-length optional claiming win going seven furlongs Jan. 20 at Laurel.

“He’s training good. He’s more mature. I gelded him and he came back really good the last time, he won and looked good,” Gonzalez said. “I hope [Alwaysmining] and [Gray Magician] go in front because both have a lot of speed and we’re going to try to come from behind. I believe the distance, he’s going to like it.”