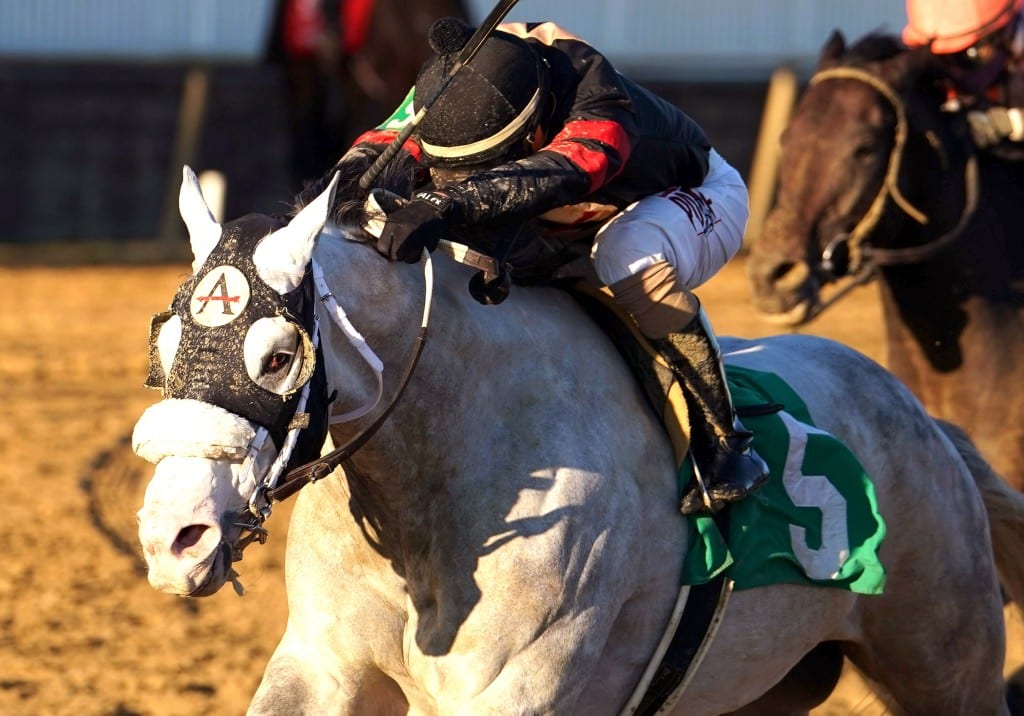 Ex-jockey Jose Corrales trains both Stronach Stable homebreds at his base of Laurel Park in Maryland.

“Something Awesome is training really well. I’ve got him back the way I expected him to come back. He’s gone through a lot of things, but he’s ready,” Corrales said. “I don’t call those shots, but I’d love to run him in the Pegasus and I think he’s ready for that competition.”

A 7-year-old son of Awesome Again, a multiple Grade 1 winner of more than $4 million for Stronach in 1997-98, Something Awesome won five of his first six starts after moving from Woodbine to join Corrales’ string last fall.

During that stretch Something Awesome won the General George (G3) in February and Harrison E. Johnson Memorial Stakes in March at Laurel, and the $1.2 million Charles Town Classic (G2) in April. He bled while finishing last as the favorite in the historic Pimlico Special (G3) May 18 at legendary Pimlico Race Course, returning to run second in an open seven-furlong allowance Nov. 16 at Laurel.

Something Awesome – who won the Harrison Johnson and Charles Town Classic at the Pegasus distance of 1 1/8 miles – has worked three times at Laurel since his latest effort, most recently going a mile in 1:42 Dec. 8, fastest of three horses at the distance. He has nine wins and $1.093 million in purse earnings from 26 career starts.

“I think he doesn’t really need another race before [the Pegasus]. If there’s a race that comes up somewhere we can go for it, if there’s an allowance or a little stake around, but I don’t plan to travel too far with him before that,” Corrales said.

“It’s something that everybody wishes for. If there’s any race you want to be in, this is it,” he added. “Especially coming from Maryland, like he did to win the Classic, because all the horses from everywhere come in for a race like that. If he can get a chance to run in a race like the Pegasus I think it would be something special.”

Unbridled Juan is a 6-year-old son of 1995 Breeders’ Cup Juvenile (G1) winner Unbridled’s Song, who also captured the 1996 Florida Derby (G1) at Gulfstream. Placed in four stakes, including the 2017 Eclipse (G2) at Woodbine and an off-the-turf Dixie (G3) May 19 at Pimlico in May, Unbridled Juan earned his first stakes win in the 1 1/16-mile Grover ‘Buddy’ Delp Memorial Oct. 17 at Delaware Park.

He followed up taking the 1 1/8-mile Richard Small Nov. 10, besting a field of nine that included graded-stakes winners Dalmore and Doctor Mounty; stakes winners Fellowship, third in the 2016 Florida Derby, Small Bear and Zanotti; and Papa Zulu, fourth in the 2017 Poseidon Handicap, companion race to the inaugural Pegasus.

Corrales is pointing Unbridled Juan to the 1 1/8-mile Queens County for 3-year-olds and up Dec. 22 at Aqueduct as a prep for the Pegasus. He has finished in the top three in 23 of 26 lifetime starts with seven wins and $505,323 in purse earnings.

“I think Unbridled Juan will be a tough horse in the [Pegasus]. I’m thinking about it. I think that horse, the more distance he gets the better he is,” he said. “He’s doing really good. We’re going to run him in the race on the 22nd in New York and see what happens after that.”

Audible, the 2018 Florida Derby winner, is also being pointed to the Pegasus and is scheduled to prep for the race in Saturday’s $100,000 Harlan’s Holiday (G3) at Gulfstream. Owned by China Horse Club International, WinStar Farm, Starlight Racing, and Head of Plains Partners, Todd Pletcher-trained Audible finished third in this year’s Kentucky Derby (G1).

Klaravich Stables and William Lawrence’s Patternrecognition, who defeated True Timber by three-quarters of a length in the Cigar Mile (G1) at Aqueduct Dec. 1, is also under consideration for the Pegasus.