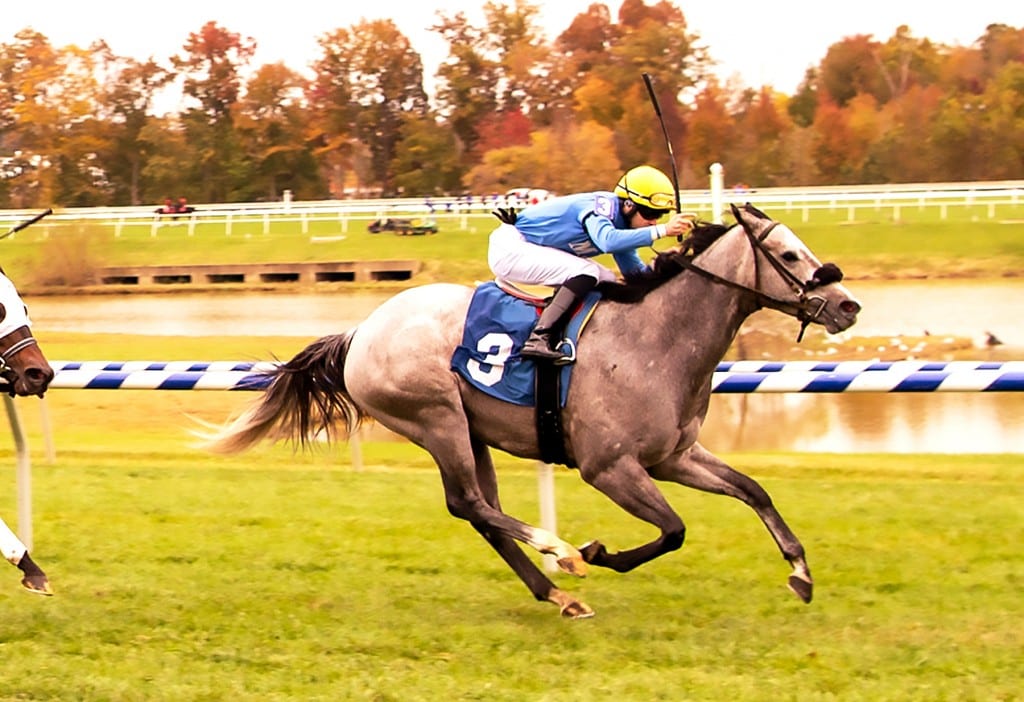 Monday racing at Mahoning Valley Racecourse features the marquee stakes race of the Mahoning meet – the $250,000 Steel Valley Sprint for three-year-olds going seven furlongs. Horseplayers will certainly have many options to choose from in the Steel Valley Sprint as it drew 14 entries, with Trigger Warning installed as the lukewarm 4-to-1 morning line choice.

Three Midlantic runners — Still Having Fun from Tim Keefe’s Laurel Park barn and the Jamie Ness trainee Smokin Nitro and Butch Reid-trained Navy Commander, both based at Parx Racing — are among the dozen sophomore sprinters expected to face the starter after scratches.

Trained by Michael Rone for Brinley Enterprises, Trigger Warning will be making his first start outside of Grade 1 company since his runner up effort in the Indiana Derby (G3) behind Axelrod in July. Winless since a score in the $100,000 Tom Ridge at Presque Isle earlier this year, the colt by Candy Ride has knocked heads with some of the division’s heaviest hitters in the likes of Catholic Boy and McKinzie in the Travers (G1) and Pennsylvania Derby (G1) respectively and most recently City of Light in the Breeders’ Cup Dirt Mile (G1). Despite not being up to that level of competition, his trainer is confident Trigger Warning will show up at Mahoning come Monday.

“He always tries hard and I expect another top effort,” said Rone.

While the morning line favorite may have gone up against the biggest names in the division, the biggest win this year posted by any of the Steel Valley Sprint contenders belongs to the Maryland-bred Still Having Fun, who took the Woody Stephens (G2) on Belmont Stakes day over Engage and Promises Fulfilled at odds of 13-to-1.

Winless since that triumph at Belmont, Still Having Fun was most recently seen checking in fifth — though beaten less than four lengths — behind the comebacking Audible in the Cherokee Run at Churchill Downs on the Breeders’ Cup undercard.

The 9-to-2 second choice leaves from post 10 with Victor Carrasco in the irons.

Other stakes winners in the field include Long Branch victor Navy Commander and Wyatt’s Town who ships down from Woodbine on a four race winning streak. Navy Commander struggled in a pair of two-turn stakes after the Long Branch, finishing seventh in the Grade 1 Haskell and sixth in the PA-bred Roanoke at Parx. But shortened up to 6 1/2 furlongs in his last start, the Poseidon’s Warrior gelding responded with a six-length triumph and career-best BRIS speed figure. Frankie Pennington will ride a runner who’ll have to overcome the farthest outside post.

Smokin Nitro (10-1), a Pennsylvania-bred, is an absolute speedster, having led at the first and second calls of every race of his nine-race career. He has gone on to win six of those nine starts, along with a pair of runner-up finishes. He most recently took an open, $55,000 allowance on the Laurel Park lawn, motoring to a one-length victory over a rugged field for his second consecutive triumph. Angel Suarez will ride, and the duo will leave from post number two.

The Steel Valley Sprint is scheduled as the seventh race on Monday’s card with post time slated for 3:08 P.M.

The supporting stakes race on the card – the $75,000 Hollywood Gaming Mahoning Distaff – drew a field of nine fillies and mares for the six furlong event with the well-traveled, multiple stakes winning mare Lake Ponchatrain installed as the 5-to-2 morning line favorite.

The Charles Town based Lake Ponchatrain has made the rounds in 2018, making eleven starts at six different tracks in her six-year-old season, which got underway in March with a 5 1/2 length win at Mahoning Valley in an allowance race going the same six furlong distance she’ll encounter on Monday. The Ernest Haynes trainee most recently finished fourth as the odds on favorite in Remington Park’s Oklahoma Classics Distaff Sprint.

While Lake Ponchatrain may be the morning line favorite, she figures to vie for favoritism in the Distaff Sprint with Puntsville and recent Keeneland allowance winner Annathela. Trained by Michael Boyce, Puntsville is herself a multiple stakes winner having taken the restricted Isaac Murphy Stakes at Arlington Park in both 2016 and 2018.