Breeders’ Cup: A brief history of Charles Town Classic runners in the BC Classic 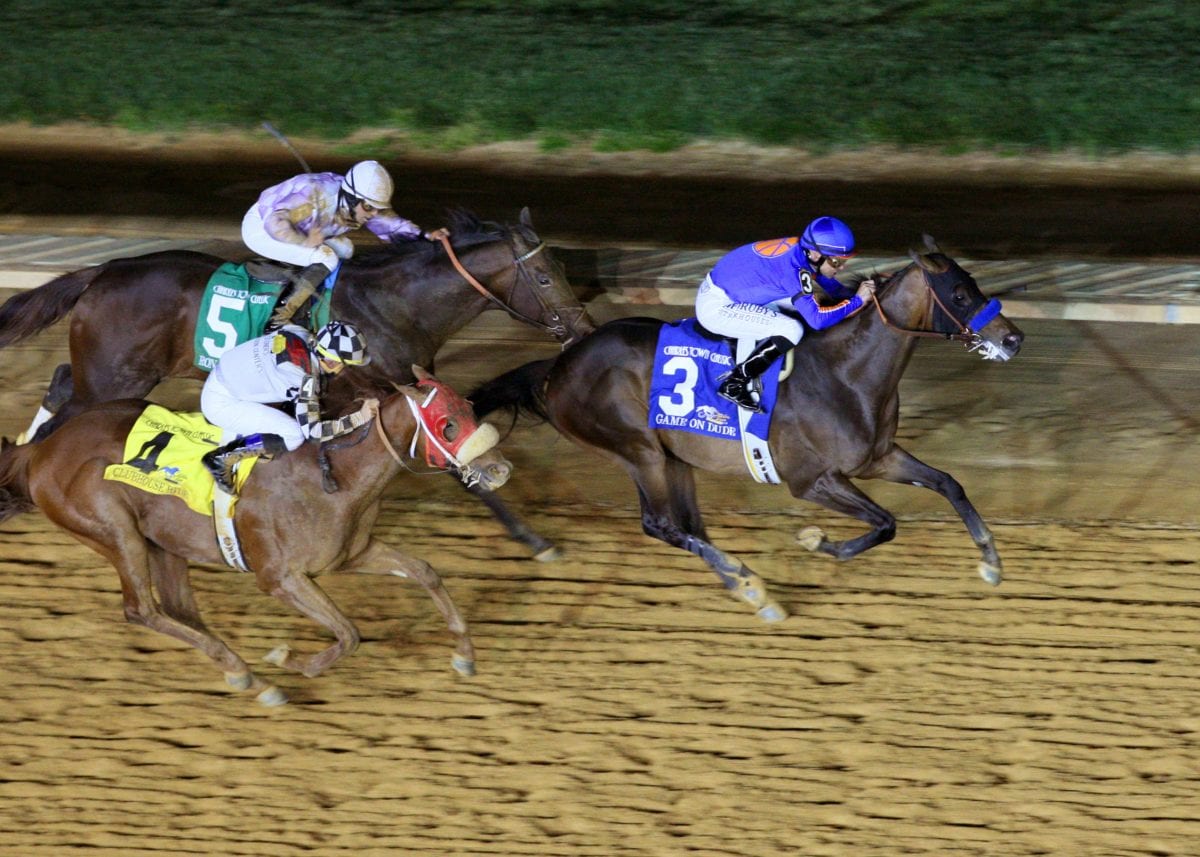 Game On Dude holds off Ron the Greek and Clubhouse Ride to win the 2013 Charles Town Classic. Photo by Coady Photography.

When Discreet Lover faces the starter for the Grade 1, $6 million Breeders’ Classic on Saturday, it will mark the fifth time in the last eight years that the Grade 2 Charles Town Classic has produced an entrant in the big race.

Discreet Lover showed little in Charles Town, finishing sixth of seven at odds of 29-1, beaten by a dozen lengths. He continued in that same basic vein for much of the rest of the season before suddenly earning a Breeders’ Cup spot with his neck triumph in the Grade 1 Jockey Club Gold Cup. That win, in which he was off at 45-1, came over fellow Breeders’ Cup Classic entrants Thunder Snow and Mendelssohn.

Discreet Lover, trained by Uriah St. Lewis for Trin-Brook Stables Inc., is 20-1 on the morning line and will be looking to be the first Charles Town Classic runner to win the Breeders’ Cup the same year as his visit to Charles Town. The history:

In his stellar career, Game On Dude made three bids for the Breeders’ Cup Classic, as well as three visits to Charles Town. He made the first of each in 2011.

In the 2011 Charles Town Classic, then a Grade 3, the Bob Baffert trainee pressed the early pace set by Tackleberry, took the lead inside the half-mile pole, but could not maintain it, falling to the late-running Duke of Mischief by two lengths while just holding off Tizway for the place. Game On Dude, with David Flores up, was sent off at almost 6-1; the favorite that day was Rule.

Six-and-a-half months later, Game On Dude, a 14-1 outsider, led for a long way before settling for second, behind Drosselmeyer, in the Breeders’ Cup Classic. Ruler On Ice was third, while favored Flat Out was fifth. That would prove to be Game On Dude’s best Breeders’ Cup result.

Game On Dude skipped Charles Town in 2012 — heading instead to Dubai for the Dubai World Cup, in which he finished 12th — but returned to West Virginia in 2013, and this time he got the money. Against a small but rugged group — three of Game On Dude’s five rivals surpassed the million-dollar mark in career earnings — Game On Dude, this time with Mike Smith up, had to hold off late runs from two of those millionaires — Clubhouse Ride and Ron the Greek — to win by a half-length.

That win was one of his four straight to start the ’13 campaign, but alas, it all came crashing down in the Breeders’ Cup Classic, that year contested at Santa Anita. Sent off the 8-5 favorite, Game On Dude was up close early but tired to finish ninth in a thriller won by Mucho Macho Man.

It was Game On Dude’s final Breeders’ Cup Classic; he ran five races the following year, winning his third Santa Anita Handicap but finishing second in the Charles Town Classic to late-running longshot Imperative. After a pair of fourth-place finishes in graded stakes, Game On Dude’s career was done, with 16 wins and nearly $6.5 million in the bank.

For the first — and thus far, the only — time, two runners competed in both the Charles Town Classic and the Breeders’ Cup Classic.

In the Charles Town Classic, Game On Dude, the defending champ, finished second — splitting the two runners who would go on to the Breeders’ Cup. Imperative rallied from off the pace and surged to victory — a feat he would reprise in 2017 — while Moreno, who led early, managed to hold third after giving up the lead to Game On Dude. Moreno would return to score in Charles Town the following year, but 2014 belonged to Imperative. With Kent Desormeaux up, the runner, then trained by George Papaprodromou, lit up the tote board at 26-1, the longest-priced winner in CT Classic history.

Neither Imperative nor Moreno, however, found much joy in the Breeders’ Cup Classic. Sent off at 28-1 in that year’s BC Classic, also run at Santa Anita, Moreno, trained by Eric Guillot and ridden by Javier Castellano, was one of several horses impacted by a roughly run start to the race, triggered when Bayern sliced across the field to attain the rail. Unable to get his customary in-front or up-close spot, Moreno was fifth early and faded from there, ultimately finishing last.

Imperative also encountered early trouble, getting pinched back at the break. He could manage only an even effort, finishing ninth.

While Imperative earned his second Charles Town Classic title in 2017 with a late rush, another late runner just missed in that event. War Story, like Imperative owned by Loooch Racing Stables (in partnership with others), was a dead-game third in the CT Classic.

Trained by Jorge Navarro and ridden by Tyler Gaffalione, War Story was five wide on the final turn before closing with determination to fall just short. He ended up third, but beaten just a half-length for all the money and just a neck behind runner-up Matt King Coal.

In his next start, War Story won the Grade 2 Brooklyn at Belmont Park, and a few months later found himself, at 56-1, the second-longest shot in the 11-horse Breeders’ Cup Classic, in ’17 contested at Del Mar. With Jose Ortiz in the irons, War Story was towards the rear of the field early, rallied smartly while wide on the course, and nearly earned the show spot, ultimately settling for fourth, beaten four lengths by winner Gun Runner.

It was the second-best Breeders’ Cup Classic finish by a Charles Town Classic alum.