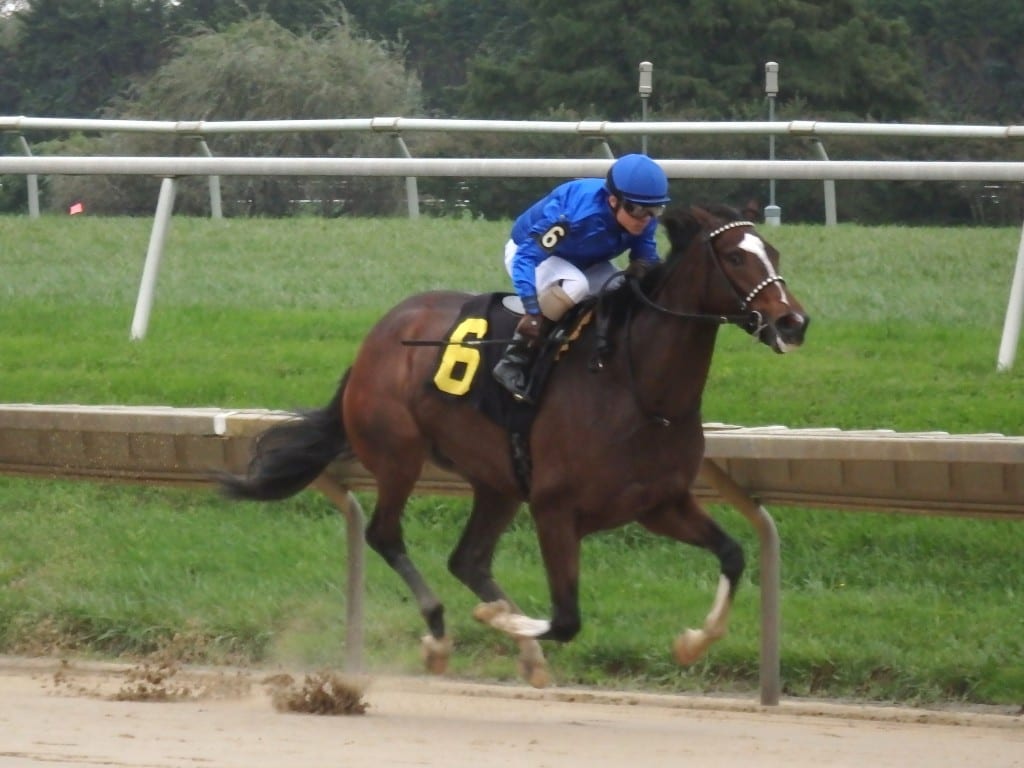 Alfresco won at first asking at Delaware Park. Photo by The Racing Biz.

Trainer Mike Stidham has scores of horses in his operation.

But it’s doubtful that any of them are better bred than Alfresco, who made a favorable impression on debut Monday afternoon at Delaware Park.

Alfresco, bred and owned by Godolphin, is a daughter of Tapit out of the Saint Ballado mare Ashado. And Ashado? All she did as a racehorse was earn Eclipse Awards as champion three-year-old filly of 2004 and champion older mare of 2005 and, eventually, a spot in racing’s Hall of Fame.

“We’ve always really liked the filly,” said Ben Trask, Stidham’s assistant who runs the Monmouth Park branch of the operation. “We’ve struggled to get her to the races. She was almost ready to start as a two-year-old, but she had a few little issues. We gave her time, and it looks like we’ve done the right thing.”

After spooking a bit at something in the paddock on a cool, gray Monday afternoon, Alfresco calmed down and was the perfect professional thereafter.

Under jockey Brian Pedroza, she broke alertly and moved immediately to press the early pace set by another debut runner, Not Sure, by Lonhro. Those two zipped a quarter-mile in 22.27 seconds, the half passing in 45.78.

Not Sure still maintained a narrow advantage leaving the furlong grounds, but Alfresco lengthened stride in the final furlong and powered to a three-length victory. She stopped the timer in 1:11.83 for six furlongs.

“She’s always breezed very well. I’ve breezed her with some of our better horses,” Trask said. “She’s always been right there, been able to get by them. Obviously, she was with another first-starter you don’t know much about. But I was pretty confident coming into this race today that she would be live.”

Not Sure held second, just a head in advance of longshot Heather Hills. Alfresco, sent off at odds-on, paid $3.40 to win and topped an exacta, with the second choice being the runner-up, worth $4.50 for a buck.

As for the future, with a filly that didn’t debut until October of her three-year-old year, Trask was loath to get ahead of himself. “We go day-by-day, so we’ll see what happens,” he said.

One thing’s for sure: it’s nice to have owners with the financial and equine might of Godolphin.

“They just want to win races,” said Trask. “Money’s not an issue. You just enter horses where you can win, and win. It’s great to train for them.”

DELAWARE PARK NOTES Happy trails to Equibase chart caller Mitch Allen, retiring this year after 44 years in the business. He’ll complete his final season at Delaware Park on Saturday and then complete his career with a couple of months at Parx Racing.