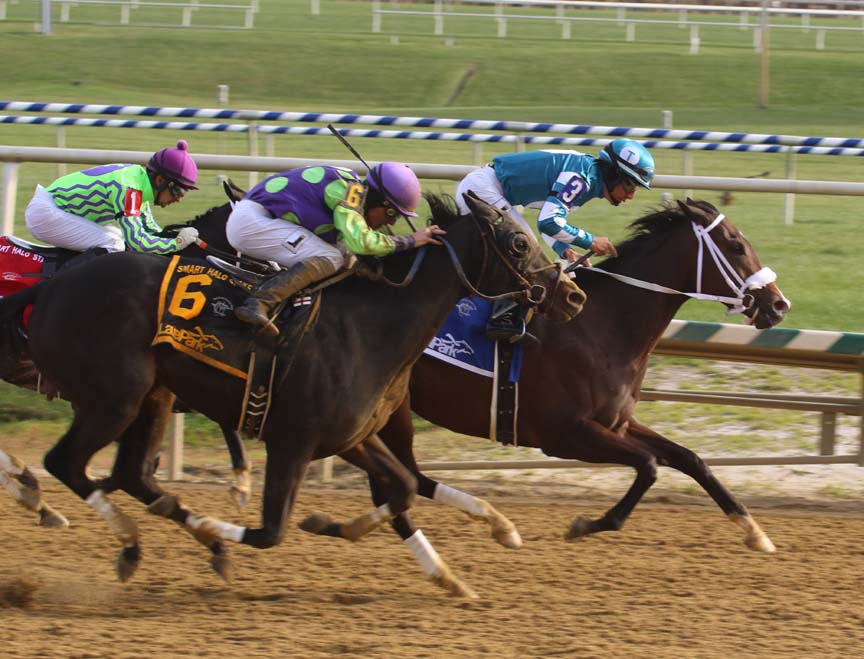 An evenly matched and overflow field of three-year-old fillies will take to the gate at Hollywood Casino at Charles Town Races this Saturday night in a quest to add a victory in the Grade 3, $300,000 Charles Town Oaks to their resume. The Charles Town Oaks is the marquee racing event on the track’s 12-race Race for the Ribbon program, which includes seven stakes and gets underway at a special first post of 5:00 P.M. EST.

In addition to the stakes action, Charles Town is again partnering with the West Virginia Breast Health Initiative to hold a series of events at the track throughout the day to raise money for breast cancer care and treatment in the state of West Virginia. The Race for the Ribbon, now in its tenth renewal, has raised more than $140,000 since its inception in 2009.

Peter Brant’s Alter Moon is the lukewarm 7-to-2 morning line favorite for the Charles Town Oaks as she exits the Test (G1) where she checked in fourth, 3 3/4 lengths behind winner and stablemate Separationofpowers.

After Alter Moon started her career in Florida under trainer Jose Velez, Brant purchased the daughter of Alternation privately following a runaway win in the Azalea at Gulfstream and turned over to trainer Chad Brown with the Test marking her first start in her new barn. Fresh off setting a record for the most wins by a trainer at a single Saratoga meet, Brown will attempt to add a second Charles Town Oaks trophy to his case, having won the race with Book Review in 2012.

Javier Castellano, who teamed up with Brown on Book Review six years ago, has the call on Saturday and will break from Post 8.

Brown is not the only conditioner with a filly entered that’s had success in the race as Linda Rice sends out two entrants in Sower and Split Time. Three years ago, Rice’s Hot City Girl emerged victorious in the 2015 Charles Town Oaks for owner Lady Sheila Stable.

After posting a win in the listed Jersey Girl at Belmont, Leonard Green’s filly made the leap into graded stakes company and came up just three-quarters of a length short of snagging the top prize in the Victory Ride (G3) won by Dixie Serenade. Sower returned to the races two months after the Victory Ride in the Prioress (G2) at Saratoga where she could do no better than a fourth. However, the succession of races sits just fine with her trainer who had formulated a plan long before entries were taken today.

“We gave Sower a break after the Victory Ride at Belmont and I had it in mind to run her in the Prioress and then back in the Charles Town Oaks,” said Rice. “We’re hoping she will like the course at Charles Town and we’re also hoping to get the Grade 3 black type on her.

Meanwhile, Split Time has had her own success in both statebred and open company stakes this year winning the Maddie May and New York Oaks restricted to New York-breds and the unrestricted Alma North at Laurel in June.

Sower is the 4-to-1 second choice on the morning line and has the services of Irad Ortiz, Jr. while Junior Alvarado has the call on Split Time

While she’ll make her stakes debut in the Charles Town Oaks, China Horse Club’s Alberobello comes into the race off of an impressive, front-running score against older fillies in a July 26 allowance race at Saratoga.

Purchased for $475,000 at Keeneland’s 2016 September yearling sale, the daughter of Bernardini has been heavily favored in each of her four lifetime outings for trainer Todd Pletcher and sports two victories in her running line with the allowance victory at Saratoga preceded by a maiden breaking win at Keeneland in April.

Hall of Fame jockey John Velazquez, aboard for each of Alberobello’s starts has the call once again on Saturday.

While nine of the entrants in the Charles Town Oaks will be looking for their first graded stakes win, Peter Deutsch’s Take Charge Paula has attained that milestone by virtue of her triumph in the Forward Gal (G3) at Gulfstream Park earlier this year.

Trained by Kiaran McLaughlin, Take Charge Paula was on the Kentucky Oaks trail in the spring and progressed off her Forward Gal win to second place efforts in the Davona Dale (G2) and Gulfstream Park Oaks (G2) while stretching out. After tiring while setting the pace in the Kentucky Oaks (G1), McLaughlin decided it was time to turn the Take Charge Indy filly back to sprint distances in the Jersey Girl and Victory Ride.

While she wasn’t able to find the winner’s circle in either attempt, her trainer thinks the distance and timing of the Charles Town Oaks could be what his filly needs to get back on track.

“She broke her maiden in July of 2017 and made her 12th start in July of this year,” explained McLaughlin. “So the owner [Peter Deutsch] and I talked about giving her more time between races. The Charles Town Oaks seemed like a great spot. She is probably best at 7 furlongs, but two turns is a concern. But she is training great.”

Jose Lezcano rides Take Charge Paula for the first time on Saturday and breaks from Post 4.

While he’ll be up in Pennsylvania tending to his star three-year-old filly Monomoy Girl in the Cotillion (G1), trainer Brad Cox is represented by Hillsbrook Farms’ Sense of Bravery in the Charles Town Oaks. After breaking her maiden in June, Sense of Bravery tallied a 7 1/4 length victory in an allowance race at Ellis Park and followed that up with a good second in the Groupie Doll (G3) against older fillies.

“She’s doing great. It’s a nice purse and the chance to win a graded stakes at a distance I think she could be best at made it an attractive spot,” said Cox who is enjoying a breakout year and will saddle his first starter at Charles Town since 2010. Luis Saez has the mount on the daughter of Street Sense.

The local contingent will have two chances to hit pay dirt in West Virginia’s only graded stakes for fillies, with the first being the Javier Contreras’ owned and trained Late Night Pow Wow, who has dominated the West Virginia-bred three-year-old filly ranks and holds a lifetime record of six wins from seven starts which includes a perfect 5-for-5 streak going around the same two-turn configuration that she’ll face on Saturday night.

After three straight wins in allowance company, Late Night Pow Wow earned her first win in stakes company in her last start, winning the Sylvia Bishop Memorial by 2 1/2 lengths. And while Contreras knows the task at hand is a tough one, his filly has given him no reason to doubt that she belongs in a race like the Charles Town Oaks.

“When you have a filly like this, you like to run when you have the home town advantage,” said Contreras who maintains a stable of approximately 30 horses on the grounds. “She’s just such a nice filly who’s done everything we’ve asked her to do and when you can run her right out of her stall in a race like this, I think you have to try.”

The second local hope comes in the form of the Charles Town-born and -raised Joe Sharp, who ships Devine Mischief up from his Churchill Downs base for her first crack at graded stakes company.

After finishing second behind Sower in the Jersey Girl, Sharp gave Devine Mischief a chance to test out the Charles Town oval in a July allowance race where she got the best of the talented four-year-old West Virginia-bred Moonlit Song.

“She ran really well in the Jersey Girl up at Belmont,” said Sharp. “The race after that at Belmont [The Victory Ride] came up tough, so we saw the non-winners of three allowance down there in the book and figured we’d give her a prep over the track. I thought she handled it well, and I’m glad we did. I thought she’d be on the lead, but you know they say, ‘you think you’re fast until you come to Charles Town.’ And I have a ton of respect for the filly she beat that night [Moonlit Song]. So now we’ll just find out if she’s good enough.”

For Sharp, a homecoming win on Saturday would be special for both his owners, Breeze Easy LLC, and himself.

“The Breeze Easy guys and I are from West Virginia, so we talked about it in the spring when she was starting to get good. I used to gallop horses at Shenandoah Downs, so it’s always a lot of fun coming home and seeing everyone and winning races there. So yeah it would be cool to take down one of the biggest races of the year with all of your friends and family there.”

Florida-bred Awesome Mass, who will make her first start for trainer Jorge Navarro, and the multiple stakes winning Pennsylvania-bred Bronx Beauty round out the body of the race. Diamondcoat, Chauncey and She’s Quiet sit on the also eligible list and would need defections from the body to start in the Charles Town Oaks.

Post time for the Charles Town Oaks is set for 10:15 P.M. EST and can be seen on TVG and heard on the Horse Racing Radio Network.