Four races that have defined the MATCH Series

With one more round of races left to go in the 2018 Mid-Atlantic Thoroughbred Championships (MATCH) Series, a number of divisions, and the overall championship, remain up for grabs.

Two MATCH Series divisions — the fillies and mares sprinting on the dirt division and the three-year-olds and up going long on the dirt division — will reach their conclusions this weekend, the former ending Saturday with the Roamin Rachael Stakes at Parx Racing and the latter finishing up with the Presque Isle Mile on Sunday. The other three divisions will conclude next weekend at Laurel Park.

Here, four races that have played a major role in getting us to where we are:

Page McKenney won 22 races and earned over $1.9 million in a remarkable career in which he went from $16,000 claimer to multiple graded winner. On May 26 at Monmouth Park, the veteran campaigner, who recently was retired, scored what would turn out to be the last of his victories. Sent off at almost 8-1, the Mary Eppler trainee, with regular pilot Horacio Karamanos up, ran down the two favorites — Shaft of Light and Sunny Ridge — in the late stages to win by a half-length. That win helped propel him to 22 points in the MATCH Series and secured him the three-year-olds and up long on the dirt division.

2. The stewards decide the Polynesian.

Laki had danced every dance in the three-year-olds and up dirt sprint division heading into the fourth race of the series, the seven-furlong Polynesian Stakes at Laurel Park. Yet his best result in the first three races was a third-place finish in the Mr. Prospector Stakes at Monmouth. In the Polynesian, Laki, with Karamanos up, and Lewisfield, with Arnaldo Bocachica, hooked up midway on the turn and slugged it out the rest of the way. When they crossed the wire, it was Lewisfield in front by just a nose; but after a stewards’ inquiry and an objection by Karamanos, the stewards determined that Lewisfield had fouled his rival and they elevated Laki to first. That gives Laki, trained by Damon Dilodovico for Hillside Equestrian Meadows, 23 MATCH Series points — the most of any horse heading into the final leg, which will take place September 22 at Laurel Park.

3. A three-way thriller in the Dashing Beauty.

The top three finishers in the $75,000 Dashing Beauty Stakes at Delaware Park July 7 were all within a head of each other, with Cairenn on the rail, Jessica Krupnick on the outside, and a late-surging Lake Ponchatrain in between. Ultimately, it was Jessica Krupnick, with Trevor McCarthy in the irons, who prevailed, beating Lake Ponchatrain by a nose with Cairenn in third. Jessica Krupnick paid $27.80 to win as the second-longest shot on the board in a race in which the top three finishers were fifth, seventh, and sixth, respectively, after the opening quarter-mile. The narrowest of victories has helped propel Jessica Krupnick to 22 points, good for second overall and for the filly and mare dirt sprint division championship.

Another top-notch salvage job by trainer Mary Eppler is that of Oak Bluffs, an eight-year-old former $5,000 claimer on the brink of securing the MATCH Series three-and-up sprinting on the turf division. Oak Bluffs, who has competed in every race of the series, has 22 points, which leads the division and leaves him currently tied for second overall. His total is built in large part on his win in the Pennsylvania Governor’s Cup at Penn National June 2. Fresh off a third-place finish in the Jim McKay Turf Sprint at Pimlico, Oak Bluffs, with Paco Lopez in the irons, slipped through inside on the turn before angling out for running room in the lane and surging to win by three-quarters of a length. 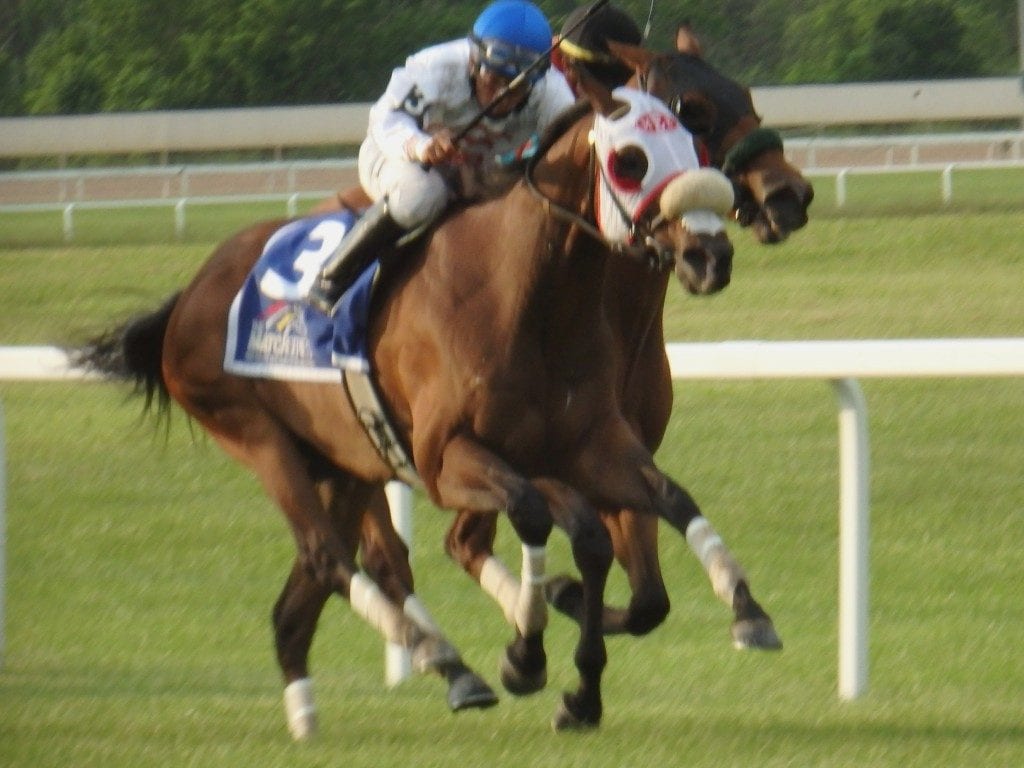