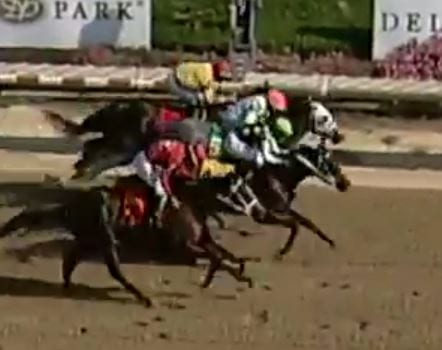 Well Graced prevailed narrowly in the Strike Your Colors.

“When we entered, I thought we had a shot,” said trainer Erin McClellan in the aftermath of Wednesday’s $50,000 Strike Your Colors Stakes for two-year-olds at Delaware Park.

The bettors weren’t so sanguine on the chances of her trainee, Well Graced. He went off at 29-1, the second-longest shot in he eight-horse field.

But when the dust had settled, Well Graced was a deserving victor, leading just about every step of the way and stubbornly holding off challenges throughout the stretch run, prevailing by the narrowest of margins — a nose — in a four-horse photo.

The victory was McClellan’s first stakes win as a trainer.

“I am ecstatic,” McClellan said. “This is my first stake win as a trainer, so it is even more sweet that I own the horse.”

Well Graced won easily at first asking, taking a Penn National maiden race by nearly four lengths, also in front-running fashion. But McClellan said that making the lead in the Strike Your Colors was not planned.

“He is just naturally fast,” McClellan explained. “I actually in all honesty gave Emilio (Flores) zero instructions. He is a veteran rider, he has ridden a lot of horses, and he has won a lot races. You do not know what is going to happen when they break and I do not want him worry about following directions instead of riding the race.”

Nonetheless, the duo zipped to the early advantage, leading by a length-and-a-half after an opening quarter-mile in a sharp 21.47 seconds.

Entering the stretch, another wagering outsider, Lippi Lorenzo, 18-1 with Mario Pino up, made a bid on the outside.  Aspect, also 18-1 with Jose Garcia in the irons, rallied on the rail.

In the late stages, the Ron Potts trainee Sapphire Shilling (8-1) made a spirited rally between horses. But none could get to Well Graced, who held off Sapphire Shilling by a nose for the win. It was a neck back to Aspect in third and a head farther back to Lippi Lorenzo, who finished fourth and was clear of his rivals.

Running time for the 5 1/2 furlong test was a pedestrian 1:05.16 — virtually identical to the time recorded a few races earlier by maiden claiming juveniles.

Well Graced now has two wins from two starts with purse earnings of $49,512. By Well Blessed, he is out of the Attorney mare Nancy’s Grace, a nine-time winner on the track. He was bred in Pennsylvania by Judy Barrett’s Godstone Farm operation, which also owns Well Blessed.

” Judy Barrett bred the horse, and this is the first foal to run by Well Spelled who is owned by her,” McClellan said. “I am so grateful to her for giving me so many opportunities with her babies.I am ecstatic for her because the first one is turning out to be successful.”

McClellan said that the Pennsylvania Nursery Stakes at Parx Racing in November is a possibility for her charge but that her main immediate focus would be to ensure that Well Graced came out of the race well.

Oh, and one other thing.