Lookback: No turf, no problem in Virginia-bred stakes 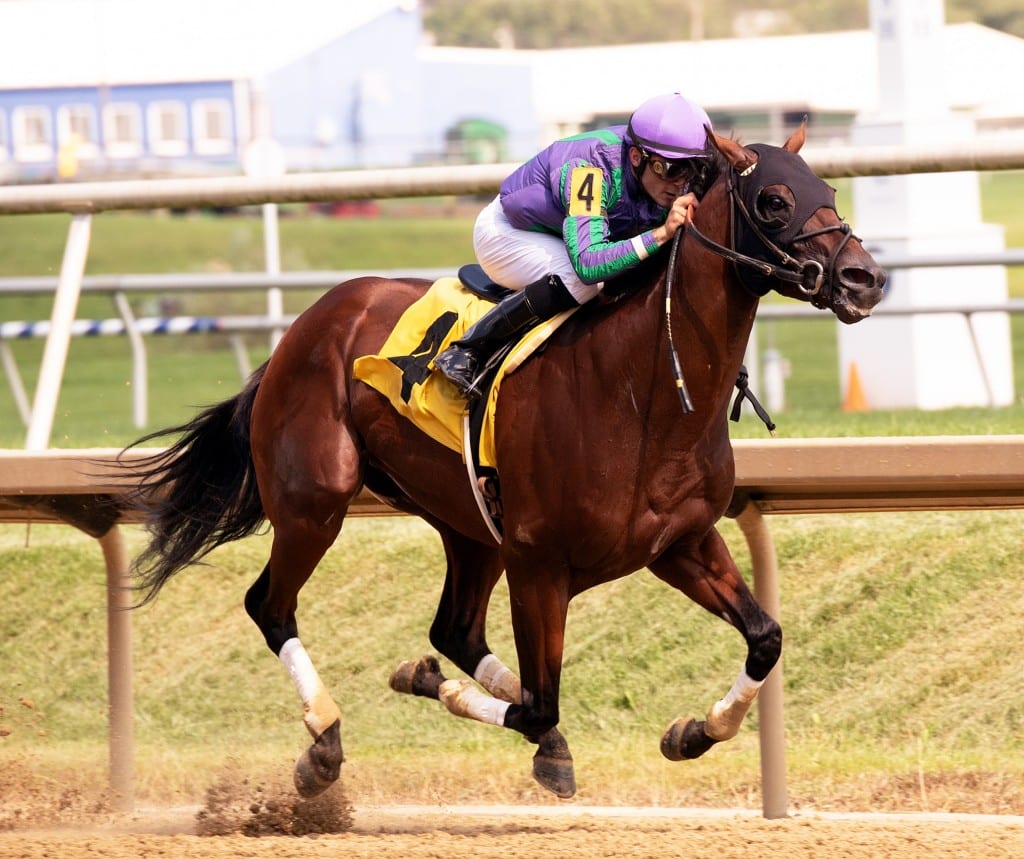 Owners, trainers and jockeys who competed in the quartet of Virginia-bred stakes races belatedly transferred from the turf course to the main track last Saturday afternoon at Laurel Park were clearly undeterred by the heavy showers the two days prior that caused the surface switch. One jockey accounted for two of the stakes and one trainer came close to winning the last two stakes.

Jockey Daniel Centeno got the late assignment aboard Paulita for the $75,000 William M. Backer Stakes fir Virginia-bred fillies and mares at one mile on the main track, and both he and trainer Arnaud Delacour were among the few members in the crowd or on the backside to root for heavy rains the previous days. Paulita was listed as a main track only entrant and quickly inherited the favorite’s role when the stake was shifted to the dirt and caused the defection of likely choice Armoire.

“Her last race on the dirt was also taken off the turf and she ran tremendous that day,” Centeno said of Paulita, a sophomore daughter of Scat Daddy who was actually bred by William. Backer, the race’s namesake. “She’s got plenty of early speed and I was looking to get away from there in a good spot. She was able to sit just off the leader and then I let her go turning for home. When Queen Caroline started the make her move it looked like she might go by my filly. She had all the momentum. But when she got alongside me my filly seemed to find another gear.”

Paulita notched her first stakes score and her second win in five career outings for owner Hat Creek Racing. Her first four starts had come at three different tracks and under the guidance of Eclipse Award winning trainer Chad Brown. She had finished fifth in her career debut against maiden special weight foes on the main track at Gulfstream Park then finished second on the turf at Tampa Bay before romping home 10 lengths clear in her only prior score in a maiden special weight at Monmouth transferred from the turf to a sloppy main track.

Several races later on the card, it was River Deep who delivered the most impressive performance in the quartet of stakes events when he romped home seven lengths clear while taking the $75,000 Hansel Stakes for Virginia-breds while getting the one mile on the main track in 1:36.68, nearly two seconds faster than the clocking Paulita posted while taking the Backer. The four-year-old Arch colt trained by Phil Schoenthal for owner-breeder Morgan’s Ford Farm rekindled his trainer’s faith in the horse and the program.

“I had cross-entered him for the Hansel and Meadow Stable, but really I was leaning toward this race all along,” Schoenthal said after River Deep notched his first win in five starts this year, recorded his fifth win from 15 career outings, and pushed his lifetime earnings past $180,000. “He had not won a race since last December and I was beginning to think that his win streak last fall was an aberration. It’s great that they have these Virginia-bred races. He’s got one more leg in the series [on Sep. 15] and we’ll point him for that race.”

Schoenthal likened the current situation in Virginia to the days when Maryland racing faced bleak prospects waiting for slots to arrive. Many owners and breeders in Maryland had abandoned ship and either headed elsewhere or parted ways with the business entirely, as is the case in Virginia, but eventually the heartier groups have since benefited from remaining.

“It definitely reminds me of what many owners and breeders went through in Maryland the last decade waiting for slots,” Schoenthal said. “The people that stayed on have certainly reaped the rewards of their patience. With Colonial Downs coming back, a lot of owners and breeders in Virginia have continued to raise horses and race horses in uncertain times. I have a lot of good memories of racing at Colonial and I have a number of Virginia-certified young horses ready to race there when they re-open.”

Schoenthal would then saddle the favorite for the $75,000 Meadow Stable Stakes at 5 1/2-furlongs on the main track, but even-money choice Determined Vision was overhauled in the lane by Homespun Hero, who provided jockey Daniel Centeno with his second stakes score of the day. The five-year-old Hard Spun horse trained by Mark Shuman recorded his first win in four starts this year and pushed his lifetime bankroll past $210,000 on the strength of a 5-5-2 slate from 28 career tries.

Altamura won the $75,000 Camptown Stakes for fillies and mares to kick off the stakes portion of the program for trainer Wayne Catalano and owner Susan Moulton, who acquired the filly following her win in the M. Tyson Gilpin Stakes at Laurel June 23. The three-year-old daughter of Artie Schiller has now won two straight stakes at Laurel and three straight races overall, although the previous two wins were at 5 1/2-furlongs over the turf course. Oddly enough, Altamura is in the midst of a three-race win streak although she has now triumphed with three different jockeys. Channing Hill climbed aboard the filly for his only mount of the day Saturday at Laurel.

“I didn’t know much about her when I got her, except that she liked this turf course,” Hill said. “When the race came off the turf I was a little concerned she may not run her best race, but she really finished well.”