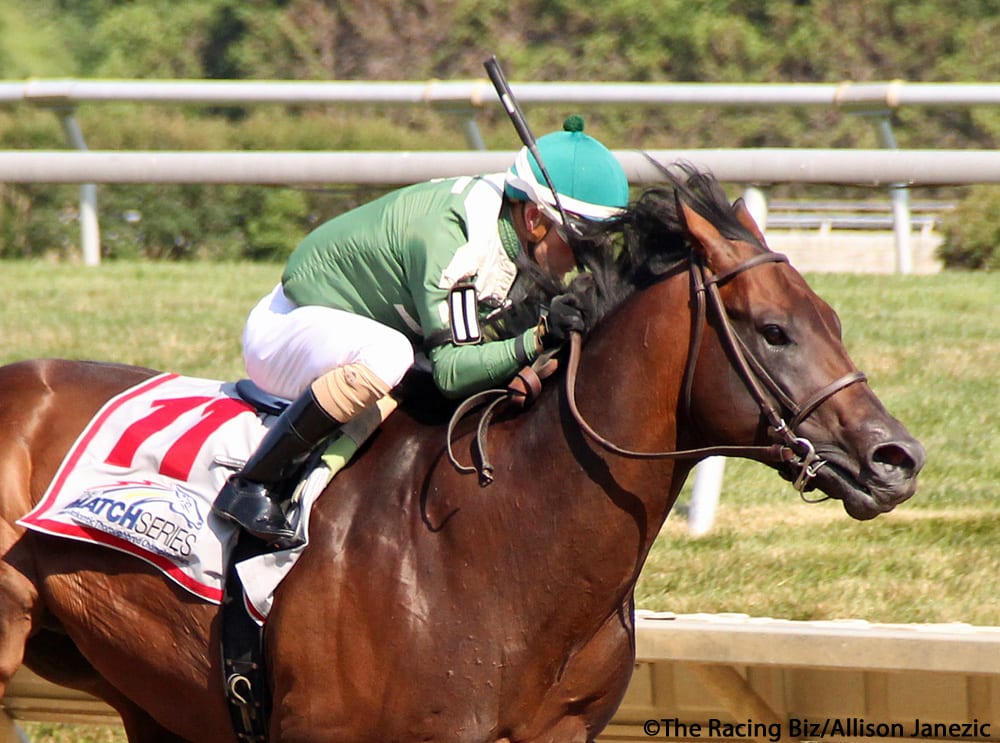 Trainer Edward “Ned” Allard said Always Sunshine has had his ups and downs, but the 6-year-old horse put it all together July 14 in the $75,000 Hockessin Stakes, third of five legs in the MATCH Series 3-Year-Olds and Up Sprint–Dirt Division, at Delaware Park.

Winner of the grade III Maryland Sprint Stakes in 2016, Stonehedge LLC’s Always Sunshine entered the six-furlong Hockessin off of a fourth-place finish in the grade II True North Stakes at Belmont Park June 8 in his second start of the year. Last year, the Florida-bred finished second in the Hockessin.

It was the first MATCH Series start for Always Sunshine, who collected 10 points for his victory and is now tied for third in the division. Allard, however, indicated Always Sunshine could race next at Saratoga Race Course in a stakes for non-winners of a graded stakes this year.

Always Sunshine broke well under Frankie Pennington and sat just off an honest pace set by The Man, a Pennsylvania-bred who came into the race with eight wins in 12 starts. He took over approaching the top of the stretch and gradually drew away to win by 3 1/4 lengths over favored Stallwalkin’ Dude, who rallied strongly entering the turn but hung a bit in the lane.

“He has always acted like a nice horse,” Allard said. “He’s had a lot of minor issues. It has just been hard trying to keep him completely together. But so far this year, he has been super.”

Pennington, who is based at Parx Racing, said Always Sunshine broke sharply and was sitting just behind the leader under little pressure, and was up to the challenge of Stallwalkin’ Dude when the latter made a sweeping move toward the lead.

“He probably saw me sitting easy, so he probably wanted to put some pressure on me early,” Pennington said. “When (Stallwalkin’ Dude) came up, ‘Sunshine’ was sitting good, and he took off to fight him. He kept going good.”

New Jersey-bred Chublicious, who won the Mr. Prospector at Monmouth Park to earn 10 MATCH points, didn’t fire his best shot and finished sixth in the Hockessin. He did pick up one point, however, and is now one point behind division leader Lewisfield heading into the final two events at Laurel Park: the $100,000 Polynesian Stakes Aug. 12 and the grade III, $250,000 Frank J. De Francis Memorial Dash Sept. 15.