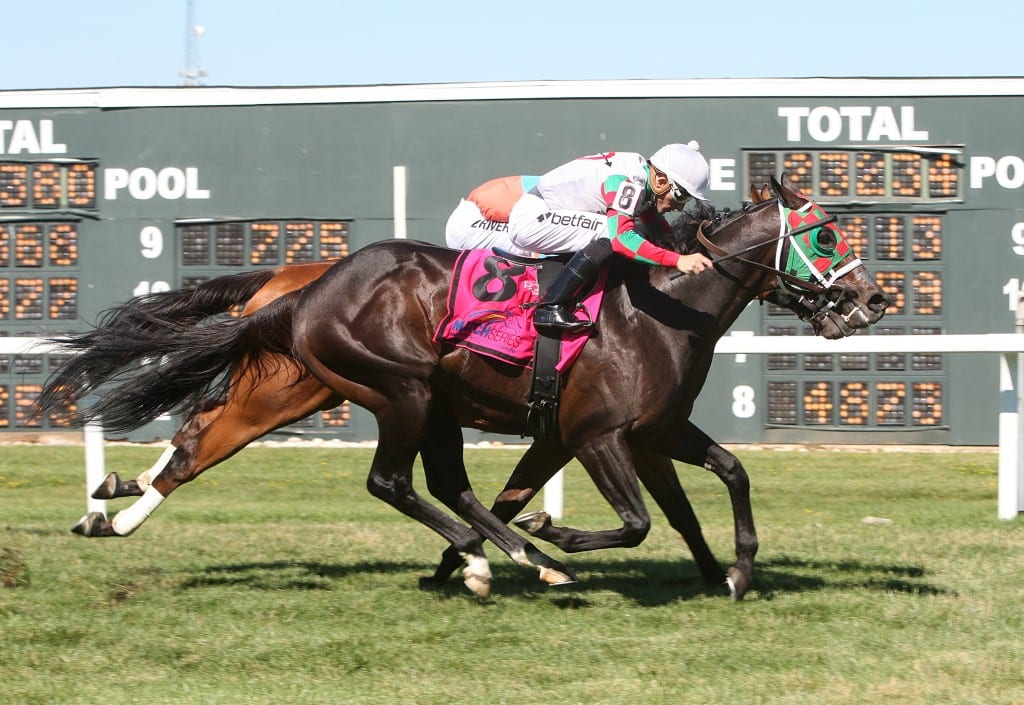 by Tom LaMarra, courtesy of MATCHSeries.com

Favored Pure Sensation was seeking his third Parx Dash crown and, though he broke alertly and grabbed the early lead, Pool Winner went by from the outside and set the pace for most of the way. Vision Perfect, ridden by Frankie Pennington rated a close-up third, challenged the leader at the top of the stretch and just got past to win by a nose.

A determined Pool Winner was second by three-quarters of a length over Pure Sensation, who attempted to re-rally along the rail. The final time was 57.18.

Vision Perfect, who paid $9.20 to win, last year finished seventh in the Parx Dash and overall had no wins in seven starts in 2017. In four starts this year he has two stakes wins, including the Silks Run at five furlongs on the turf at Gulfstream Park.

“I wasn’t really sure how he would run today,” Servis said. “I thought he threw in a clunker last time (at Churchill Downs), but maybe the race wasn’t as bad as it looked.”

Vision Perfect, a 6-year-old Kentucky-bred horse by Pollard’s Vision, in his previous start finished sixth in the grade III Turf Sprint on Kentucky Derby Day. It was his first start in the MATCH Series, and he is now tied for second in the 3-Year-Olds and Up Sprint—Turf Division with 10 points.

In the Turf Amazon, Smiling Causeway continued to pad her fine record sprinting on grass with a strong three-length victory in :56.94 under Daniel Centeno. The Kentucky-bred 4-year-old filly by Giant’s Causeway now has four wins and two seconds in six starts on the turf.

Centeno sent Smiling Causeway immediately to the lead, and she never was threatened. It made up for her previous effort, in which she raced evenly on a sloppy track in the off-the-turf The Very One Stakes in May at Pimlico Race Course. The Very One was the first of five races in the MATCH Filly and Mare Sprint—Turf Division.

“We we’re taking a shot in the slop last time, and then we were going to come back (to the MATCH Series) at Penn National (in the Penn Ladies Dash), but she had an issue and we had to wait,” Delacour said. “But she came back for this one, and she fired great today. “

The trainer said the $75,000 Incredible Revenge Stakes, the fourth of five races in the division, is possible for the filly, as are stakes at a few other racetracks.

Jamie McDiarmid, manager at Audley Farm, was pleased with the outcome.

“She is a star for us,” he said. “She was the first weanling we bought for the farm, so we’re very happy. Hopefully she’ll do even more.”

Smiling Causeway now has 12 points—10 for the Turf Amazon and two for The Very One—and therefore leads her division. She needs one more start in a MATCH event to qualify for the owner and trainer bonuses.