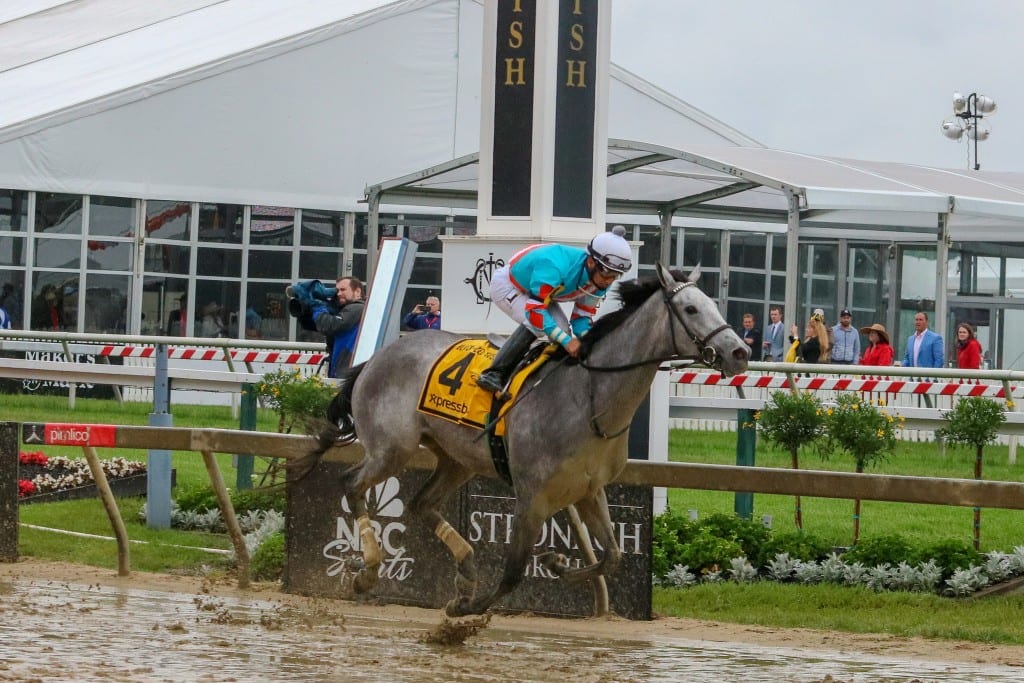 Kentucky invader Red Ruby tops the 67th renewal of the $300,000 Grade 3 Delaware Oaks at Delaware Park this Saturday. The mile and a sixteenth affair has attracted a field of 10.

“She has never been better,” said Gorder. “She has been training great, and I think she has grown a bit and gotten a little taller even since the Black-Eyed Susan. She has put together some nice works and we could not be happier with her right now.”

Regardless of course condition, Gorder knows Red Ruby typically brings her “A” game.

“We do not have to worry about it raining, that is for sure,” Gorder said. “It is nice to know that whatever she runs on, she will show up.”

Roddy Valente, RAP Racing and West Point Thoroughbreds’ Coach Rocks will be seeking to turn the tables on Red Ruby. In her most recent outing, the daughter of Oxbow finished second beaten 4¾ lengths to Red Ruby in the Black-Eyed Susan. Previously, the Kentucky-bred trained by Dale Romans finished seventh in the mile and an eighth $1 million Grade I Kentucky Oaks at Churchill Downs on May 4.

“She is training great coming into the race, and she is ready to run,” said trainer Dale Romans.

Coach Rocks has a career record of two wins, four seconds and a third from 10 starts with earnings of $285,682. Last year, she made five starts with three seconds and a third from five starts. After finishing unplaced in her 2018 debut, she posted an 8-length score in a mile and sixteenth maiden at Gulfstream Park on February 14. She followed with a 1½-length victory in the mile and a sixteenth $300,000 Grade II Gulfstream Park Oaks on March 31.

“It is just took her awhile to get her feet under her,” Romans said. “It took her a little bit, but she has developed into the filly we knew she was. She is still getting better, so we are excited about her future.”

“Blue Strike has continually gotten better since we put blinkers on her,” said trainer John Servis. “She ran huge last time. She did not get away from the gate smoothly and she got fanned wide. Blue Union Rags did not get the best start either. She is a deep closer, so she is going to need things to set up right for her. She is a game filly. If things do set up for her, she will be coming.”

Blue Strike, a Kentucky-bred daughter of Smart Strike, has a career record of two wins and two seconds from four starts with earnings $66,420, and Blue Union Rags, a Kentucky-bred daughter of Union Rags, has a career record of two wins, a second and two thirds from nine starts with earnings of $72,725. Trainer John Servis won the Delaware Oaks in 2001 with Fox Hill Farm’s Zonk.

The home turf will be defended by James Georgeades, Gregg Dasher and Ronald Pugliese Jr.’s Prospective Lady. In her last outing, the Florida-bred trained by Gerald Bennett finished third in the Light Hearted Stakes. Previously, the daughter of Prospective won the mile and forty yard $100,000 FTBOA Ivanavinalot Florida Sire Stakes at Tampa Bay Downs on May 5. She has a career record of two wins, a second and two thirds from 10 starts with earnings of $89,957.

“She is coming into the race well and she ran a big race in the prep,” said trainer Gerald Bennett. “In the Light Hearted, she bobbled at the start and then she got down on the rail and had to run against a bias the whole way. She just got a little bit tired in the end and was beaten about a length for the win. Hopefully, she runs back to that race. She has been training really nicely coming into this race and she seems to like this track as well. She is going to be facing tougher in the Oaks, but I think she will have a solid effort.”