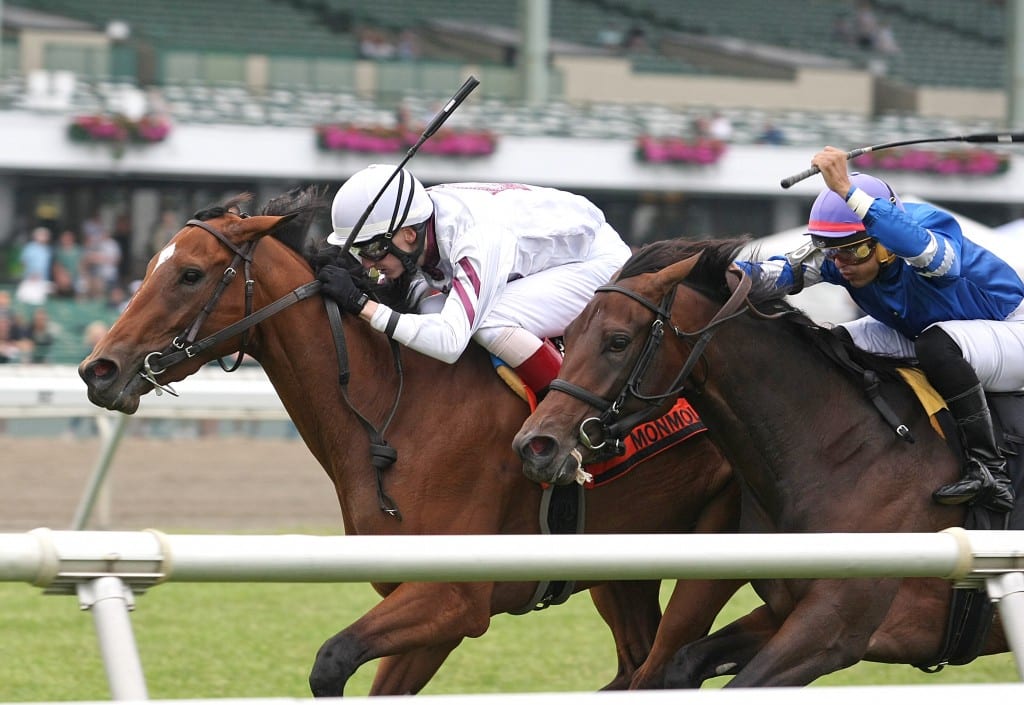 Dark Artist needed every bit of the Monmouth Park stretch to reel in front-running longshot Too Charming and surged to a neck victory in the $60,000 Open Mind Stakes on Saturday – the filly’s second stakes win in four weeks at the Shore track.

Ridden by Trevor McCarthy, Dark Artist stalked 27-1 shot Too Charming throughout the mile and a sixteenth grass race for 3-year-old fillies before poking her neck in front at the wire.

Exactly four weeks ago the daughter of Paynter-Ominous Cat captured the Boiling Springs Stakes at Monmouth, doing so by coming further off the pace.

Trainer Jane Cibelli said Dark Star may be ready to test graded stakes company after her third straight victory – all on the turf – and fourth in eight career starts.

“Being a filly, and the way she has run recently, you have to look at a graded stakes for her because of her value as a breeding prospect down the road,” said Cibelli. “But you have to be careful because she’s still improving. You don’t want to throw her into a den of wolves yet but you also want to see what’s what with her and see exactly what we have.”

McCarthy, who rode Dark Artist in her previous start, said she was closer to the pace than he had hoped but felt he had no choice since Too Charming was the lone speed.

“The plan was to let her break away from there and settle where she was comfortable,” he said. “She’s a filly that wants to be left alone to do her thing. She was actually a little bit closer than I wanted today, but last race we had a bit of pace and this race we didn’t. I still wound up getting my way. It was perfect.”

McCarthy agreed with Cibelli about testing Dark Artist even more.

So Hi Society, one of two Chad Brown-trained horses in the field, was third, another 3½ lengths behind Too Charming.

Bettors made Aztec Sense the 7-10 favorite in Saturday’s Turning for Home Starter Handicap Saturday at Parx Racing, and they were right to do so. The five-year-old Street Sense gelding cruised to a 3 1/2-length victory under jockey Paco Lopez.

It was Aztec Sense’s fourth consecutive win, sixth in his last seven starts, and seventh in nine. The victory pushed his earnings past $267,000. He is trained by Jorge Navarro for Joseph Besecker.

The Turning for Home marks the 10th anniversary of Parx’s Turning for Home program, which seeks to rehome retired Thoroughbreds. The race was limited to horses that have started for a claiming price of $18,000 or less in 2017-2018.