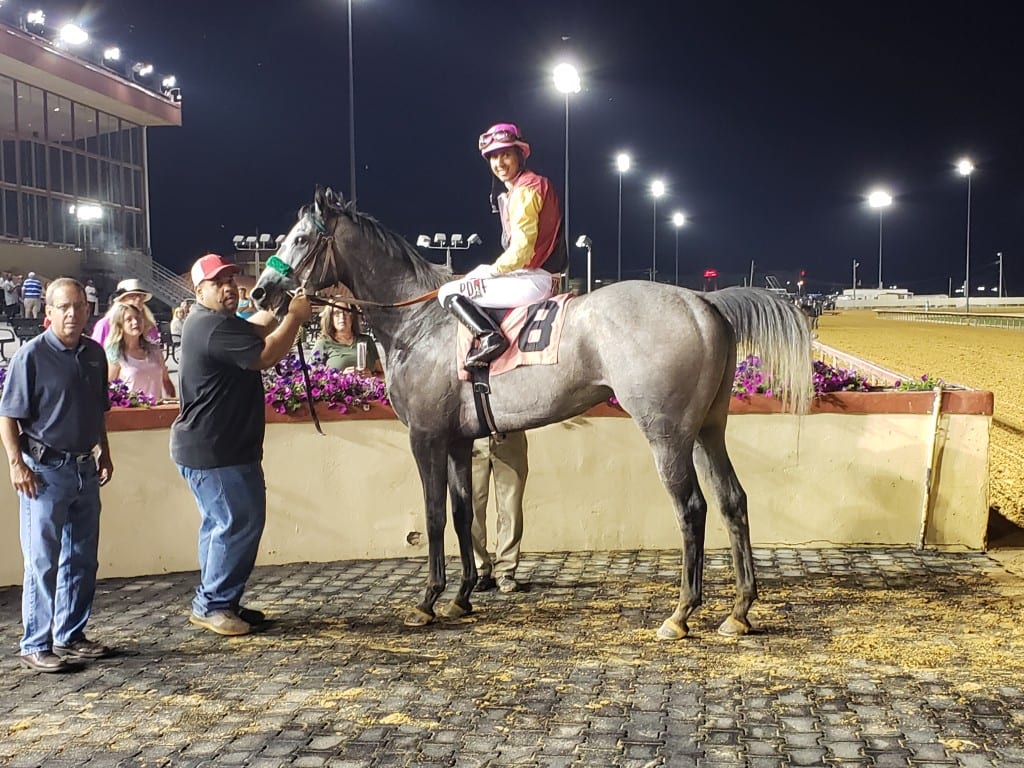 Even before his career began, Opera Nite had given trainer Jeff Runco every indication that he had plenty of potential, and on Thursday evening the Germania Farms homebred further validated his conditioner’s expectations when he romped home nearly three lengths clear in a two-turn allowance for state-bred three-year-olds and up as the 11-10 favorite with Arnaldo Bocachica aboard.

A three-year-old Gattopardo gelding out of the Evening Kris mare Nite Balance, Opera Note recorded his third win in five starts and pushed his career earnings to nearly $60,000 when he covered the seven furlongs in a solid 1:25.03 while getting only mild encouragement from Bocachica in the last quarter mile. Opera Nite has won all three of his starts in two-turn distance events over the Charles Town strip, the previous two at 6 1/2-furlongs, and both his trainer and rider believe he has ample potential to stretch out.

“I’ve liked this horse a lot even before his career began,” Runco said. “He’s always shown me he had a lot of ability. Tonight, the race went the way we thought it would. I thought the inside horses would show a little more speed and he might be sitting back a little further. But he was just off the speed and he went to the lead easily entering the far turn and finished really well. I think he’s got the ability to go further.”

Bocachica did not ride Opera Nite in his career debut on Valentine’s Day when he finished a sharp second to Last Print in a one-turn maiden special weight event here. But he has been aboard him for all three of his victories and a solid second-place finish behind William And Mary in the $50,000 Coin Collector Stakes on the undercard of the Grade 2, $1.2 million Charles Town Classic. Opera Nite has now won two allowance races since then and perhaps displayed even more ability in the more recent of the two on Thursday in his first attempt at seven panels.

“He broke really well and settled in nicely,” Bocachica said. “When I hit him going into the far turn he really took off. He really responds when you hit him with the whip. When he got the big lead turning for home he raced a little green and I hit him a few more times and he took off again. This horse has been really good in these two-turn races, but I think he could be even better stretching out. He beat some nice horses tonight and he did it pretty easily.”

Opera Nite was the solid even-money choice from post eight in the seven-furlong allowance despite the presence of Maryland invader Cash Exchange, West Virginia Futurity winner Punch Your Brother and Dr. Tucker, the full-brother to Follow The Notion who was making his seasonal debut following a 16-month layoff. Both Punch Your Brother and Dr. Tucker were restless in the starting gate, but Opera Nite loaded last into his outside stall and never had an anxious moment.

Soon after the gates opened in the two-turn allowance affair, Punch Your Brother displayed the best early speed and led the way through the clubhouse turn while Opera Nite loomed a menacing threat just outside of him. Handsome Hunt, the other Runco trainee in the field and dismissed at 25-1, settled into third, with Dr. Tucker just off that one in fourth while Cash Exchange never fired.

Punch Your Brother led the field down the backside, but Opera Nite collared him nearing the quarter pole and then opened a clear lead on the far turn and edged clear in the lane under mild encouragement from Bocachica for a five-length score while stopping the timer in 1:25.03 for his third win in five lifetime outings. Handsome Hunt saved ground throughout and rallied late to gain the place spot to complete a Runco-trained exacta. But the budding star of the outing was clearly the winner.

“He’s run well every start and he definitely seems to be better in the two-turn races,” Runco said. “But I think he could be even better when he stretch him out. He’s got a lot of ability and I’ve always been really high on him. Hopefully, he’ll come out of this race in good order and we’ll start to find another race for him here soon. But I certainly wouldn’t rule out stretching him out.”