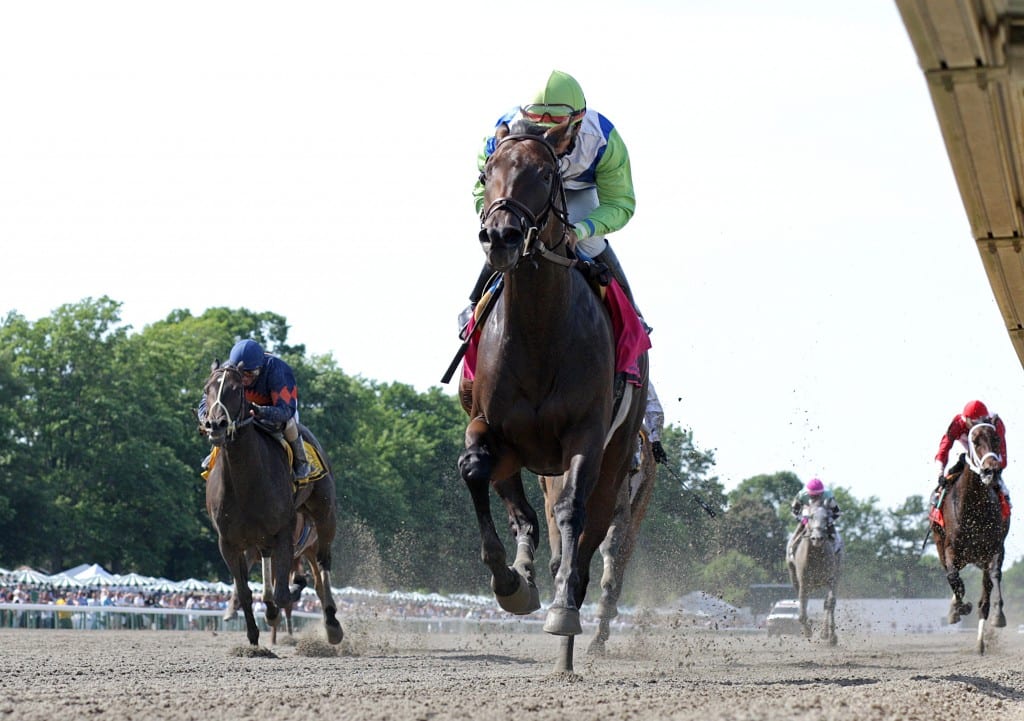 Chalon was much the best in the Regret Stakes. Photo By EQUI-PHOTO.

From a MATCH Sereies release

Chublicious, in his first start for Belmont Park-based trainer David Cannizzo, rallied from fourth early under Antonio Gallardo to collect his first win of the year after two second-place finishes in stakes. The seven-year-old Hey Chub gelding dueled with Lewisfield the length of the stretch and edged away to win by a half-length in 1:09.92 for six furlongs on a track rated fast.

Linda Zang’s Lewisfield, a Maryland-bred who has never been worse than third in nine starts, took the lead at will from Delta Bluesman heading into the far turn and battled gamely for jockey Arnaldo Bocachica and trainer Jeff Runco. Lewisfield had two lengths on fellow Maryland-bred Laki, who rallied from last to third.

“I loved that early speed duel,” Gallardo said. “I know this horse. I know he likes to come off the pace a little bit—not too far behind it but a little bit off of it. Everything came together perfectly with two horses going head to head and a lot of speed in the race. From the three-eighths pole I knew I had a lot of horse. He’s a tough horse. He loves to win.”

It was the 11th win in 27 starts for Chublicious, who won the Grade 3 Frank J. De Francis Memorial Stakes at Laurel Park last September. He paid $16.80 to win.

The division leader after two races is Lewisfield with 12 points because he competed in both events held thus far and placed second and third. Switzerland, who won the grade III Maryland Sprint Stakes May 19, has 10 points and is tied with Chublicious.

In the Regret, Chalon rated just off the early pace set by Behrnik’s Bank, took command on the turn and drew away to win by four lengths over Sycamore Racing V’s Jessica Krupnick, who prefers to be on the pace but rallied well in the lane. Liz’s Cable Girl, who prefers the lead, also raced well from off the pace to finish a neck behind Jessica Krupnick in third.

Chalon, ridden by Monmouth leading rider Paco Lopez, paid $3 to win as the heavy favorite and covered the six furlongs in a sharp 1:10.05. The 4-year-old filly by Dialed In is now tied at the top of the division with Vertical Oak, who won the Skipat Stakes May 18.

“We thought this would be a perfect steppingstone for a race at Saratoga,” said trainer Arnaud Delacour, who is based at Fair Hill Training Center in Maryland. “She has done everything except win a graded stakes, so we’re looking at the Honorable Miss. It was important to see if she could rate a bit and keep going, which she did. In the future we’d like to try to seven-eighths of a mile with her.”

Roy Jackson, who operates Lael Stable with his wife, Gretchen, was pleased with the result.

“It couldn’t have worked out better,” he said. “We’re hoping she’ll be a broodmare for us at some point.”

The MATCH Series continues June 30, again at Monmouth, with the Grade 3, $100,000 Philip H. Iselin Stakes, the second race in the 3-Year-Olds and Up Long—Dirt Division.