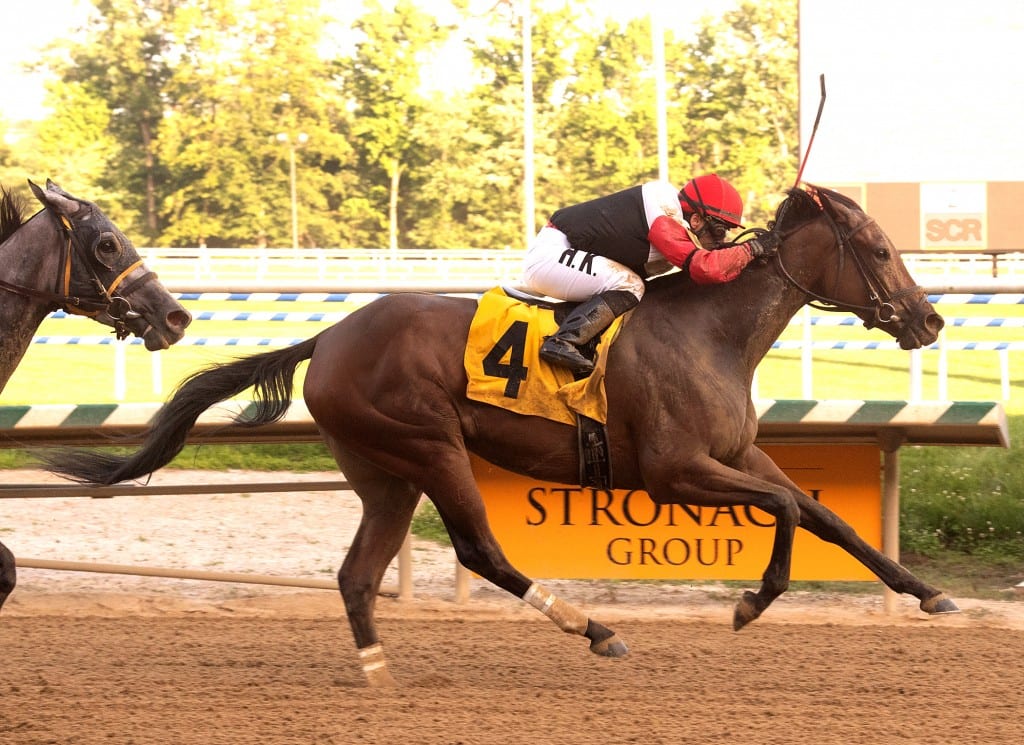 Tic Stables’ Split Time, making her open company debut in her first race outside of New York, overcame a troubled start to scoot between horses in mid-stretch and earn her second career stakes victory in Saturday’s $75,000 Alma North at Laurel Park.

The seven-furlong Alma North for 3-year-old fillies highlighted a 12-race program as the first stakes of Laurel’s 40-day summer meet which opened June 1 and runs through Aug. 19.

Ridden by Horacio Karamanos for trainer Linda Rice, Split Time ($8.40) completed the distance in 1:24.48 over a fast main track to win by three-quarters of a length over fast-closing 45-1 long shot Norma’s Charm. They were followed under the line by multiple stakes winners Limited View and Almond Roca, Aggregator and 6-5 favorite Elevenses.

“We are very pleased with her effort today,” Rice said via text. “She had a troubled start but a strong finish.”

It was the fourth win from six career starts for Split Time, a New York-bred daughter of Grade 1 winner Take Charge Indy that had raced exclusively in restricted company since her debut last December. Each of her first three wins came at one mile, including the Maddie May Stakes March 24.

“Every time you lead her over she gives you everything she’s got, and once again she got it done,” said Rice’s assistant Chris Sankar, on hand for the race. “Anytime you leave state-bred company there’s no free lunch, but she’s got the heart and the talent and everything worked out today.”

Split Time lost several lengths when another New York shipper, Elevenses, broke inwardly from the rail post and bumped the bay filly, forcing her to settle at the rear of the field as Elevenses sailed through quarter-mile in 22.41 seconds pressed by Almond Roca and Limited View to her outside.

Almond Roca took over the top spot without resistance rounding the far turn only to yield it to Limited View after a half in 45.25. Limited View drifted out straightening for home and Karamanos was able to steer Split Time between the two rivals, forging a short lead at the sixteenth pole and edging clear.

“We got a bad break out of the gate. [Elevenses] was coming out and crossed in front of me and my filly lost her action but then she started to pick it up nice and easy,” Karamanos said. “I saw they were going so fast front … but she was able to give me a nice kick and kept going strong to the wire. I think if she didn’t have that kind of trouble in the beginning she could have won it easier.”

It was the second straight win on the day for Karamanos, who also took the 10th race aboard Munificent ($14.40).

The Alma North is named for the Maryland-bred champion 3-year-old filly and Horse of the Year in 1971 and Maryland-bred champion older filly of 1972. Owned by the late Eugene Mori’s East Acres Stable, Alma North won 23 of 78 career starts with $513,597 in purse earnings from 1970-74. Her victories included graded-stakes scores in the Matchmaker (G1) and Vineland (G2), Margate (G3) and Betsy Ross (G3) handicaps in 1973.