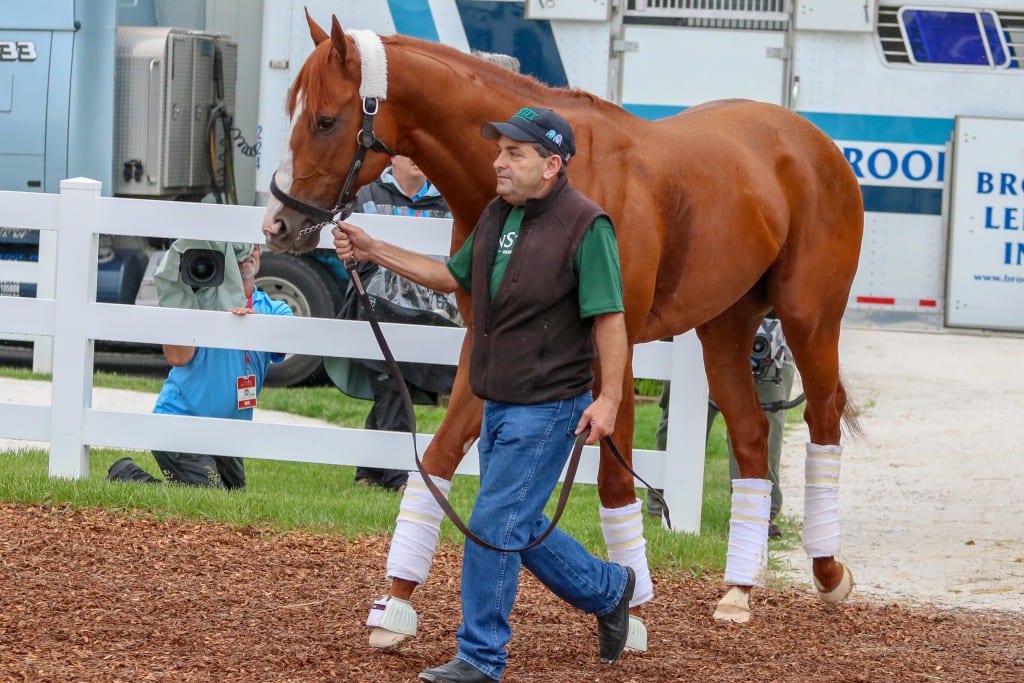 Justify arrives at Pimlico prior to the Preakness. Photo by Dottie Miller.

With Hall of Fame trainer Bob Baffert watching intently, Triple Crown hopeful Justify went for his final gallop around Belmont Park on Friday morning, a day before he attempts to become the 13th Triple Crown winner in the Grade 1, $1.5 million Belmont Stakes presented by NYRA Bets.

The rangy, chestnut colt galloped 1 3/8 miles around Big Sandy with regular exercise rider Humberto Gomez aboard. Baffert was happy and relieved that all the prep work has been completed, and it’s on to the 1 ½-mile Belmont, where he will be seeking to become only the second trainer to win more than one Triple Crown, having won his first in 2015 with American Pharoah.

“We got the last gallop in, just another smooth, good day,” said Baffert, who watched the gallop through binoculars with his wife Jill at his side, along with several members of the four ownership groups: China Horse Club, WinStar Farm, Starlight Racing and Head of Plains Partners LLC.

A TV helicopter also arrived to film an aerial view of Justify’s gallop, and Baffert was glad he chose to equip Justify with earplugs.

“I’m glad we did because when I saw that helicopter up there hovering over, I guess they wanted to watch him go around there,” said Baffert. “He is just moving over the track really well. It’s just amazing how he switched leads right on cue, comes down the lane. This is what a trainer hopes to see the day before his horse runs.

“Coming off the track he was just full of himself. He just seems like he’s still improving. He looks like he’s ready to run. I know he’s going to show up and run his race, but he still has to get around there. The racing part is out of our control. I couldn’t be happier with the way he looks. He looks no different than the way American Pharoah did coming in here. So we’ll just have to see how it goes.”

Justify won the Grade 1 Kentucky Derby and the Grade 1 Preakness, both over sloppy tracks, to set the stage for his Triple Crown try against nine rivals in front of an expected crowd of 90,000. The weather forecast is calling for partly cloudy skies with a 20 percent chance of rain.

“I prefer to see a fast track,” said Baffert. “When the weather is involved, you have to ride him differently. Everything has to be in a hurry. You have to go so fast.”

Nothing so far has seemed to bother Justify, bidding to join Seattle Slew as the only horses to win the Triple Crown with an undefeated record.

“He’s always been a big strong horse,” said Baffert. “I brought a horse up here, [2001 Belmont winner] Point Given. He’s a big strong horse like him, and he seems to handle everything very well. He’s a big muscled-up horse and he eats well. He thrives. He’s really thriving now. He looks like he’s getting really fit right now.”

It will be a slow, quiet Saturday for Team Justify leading up to the race. The son of Scat Daddy will get his morning feed, be taken for a walk, and as it gets closer to the race, about four or five hours before the 6:46 p.m. post time, his hay and feed will be taken away.

“We just wait. It’s a long day. You’re thinking about everything,” said Baffert. “He’ll be nice and calm. We keep it really quiet.

“This horse has not shown me any signs of regression whatsoever,” said Baffert when asked if the Triple Crown grind of three races in five weeks was getting to Justify. “If he did, we would not have brought him up here. To me, it’s important he is doing well. He’s a very valuable and beautiful horse. The last thing we want to do is embarrass him. He just seems like he’s getting better.”