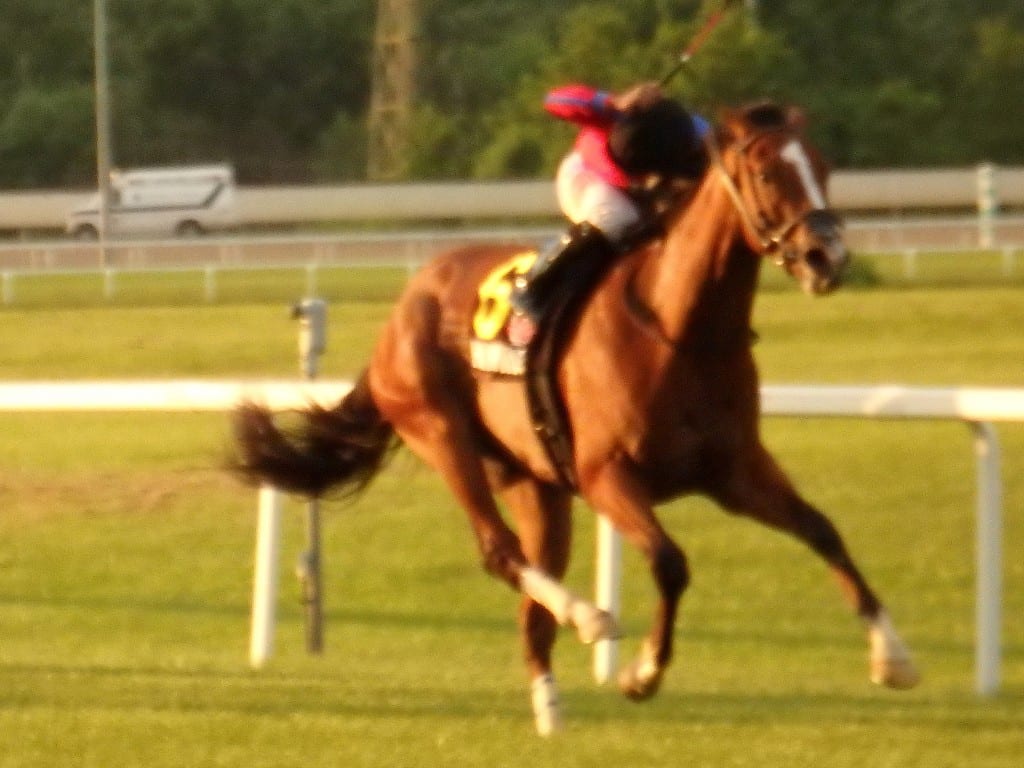 Hawkish. Photo by The Racing Biz.

In his last start, three-year-old Hawkish dazzled, winning an Aqueduct allowance by almost five lengths in 1:34.39 — setting a course record in the process.

Saturday at Penn National, he proved that wasn’t a fluke, romping to a three-length win in the Grade 2, $500,000 Penn Mile.

“He’s a homebred, which is great. That’s the best part of all this,” said Justin Nicholson following the race. Nicholson is the “J” in the ownership group’s name, AJ Suited Racing Stable, which bred the horse and owns him in partnership with Robert LaPenta.

“He ‘s still figuring it out,” he added. “He still kinda looked green in this one.”

Maybe so, but once the running began, he left a talented field — which included, among others, the multiple graded stakes winner Maraud from the powerful Todd Pletcher barn — treading water in his wake.

Hawkish  is an Artie Schiller gelding out of the Unbridled mare Bridal Memories; though Bridal Memories never raced, she is a half-sister to the multiple graded stakes-winning millionaire Winter Memories. Nicholson’s group purchased Bridal Memories in foal with the horse who would become Hawkish, but Nicholson said that his family, their longtime trainer Jim Toner, and this equine family have a long association — not the least part of which is Toner’s having trained Winter Memories.

“When we went out and bought the mare, we did it knowing it was a good fit for Jim,” Nicholson said.

Hawkish broke his maiden at first asking at Gulfstream Park — a race in which he was, joked Nicholson, running more sideways than forwards — and then finished fourth, three lengths behind Maraud, in the Grade 3 Palm Beach.

That defeat, however, did not leave the connections thinking any less of their talented youngster.

“You take a maiden winner into a Grade 3, a little bit of it is just seasoning. That was a tough ask,” Nicholson said. “He was also kind of against the run of the race.”

Hawkish made a solid middle move to reach contention before flattening out late. Then came the Aqueduct allowance in mid-April. That performance left the connections with options — but a bit of a conundrum,too.

They could come to the Penn Mile, with its $500,000  purse and Grade 2 stature. Or they could stay home at Belmont Park and run in the Grade 3 Pennine Ridge, a $200,000 test at 1 1/8 miles. The former offered more money and plenty of prestige; the latter, perhaps a better stepping stone to the 1 1/4 mile Belmont Derby July 7.

In the end, the money helped make the decision, Nicholson said. So, too, did Hawkish’s spotless, two-for-two record at one mile.

“I think he may prove to be, so to speak, just a miler,” Nicholson said. “When you win a race like this, it doesn’t feel like ‘just anything.’”

Under jockey Manny Franco, Hawkish sat sixth, though within a couple of lengths of the early lead, through modest early fractions. Maraud and Encumbered carved those fractions, trading the lead through a half-mile in 47.62 seconds and three quarters in 1:11.94.

That set the field up for what appeared likely to be a wide-open, all-out sprint for home. But Hawkish, three wide on the far turn and four wide tipping for home, accelerated home, lugging in after clearing the field but still drawing away eagerly under a hand ride. Hawkish zipped the last quarter-mile in about 23 seconds flat.

Way Early rallied late for the place, and Coltandmississippi was along for third.

Hawkish, who paid a paltry $4.80 to win as the favorite, now has three wins from four starts.

Nicholson said that the July 7 Belmont Derby may still be on the horse’s agenda, and he’s hopeful the mile-and-a-quarter won’t be a problem.

“The bottom side of his pedigree, it’s all classic Darby Dan turf,” he explained.

But that’s a problem for a different day. For now, Nicholson, his partner Alan Aberg — the “A” in AJ Suited — and friends and family were happy to celebrate in the winner’s circle. And any controversy over which race to choose was long since in the past.

“Jim’s a family member at this point,” Nicholson said. “It was almost a little hard to go through the process of not exactly seeing it the same way… I think we both felt by the end that the Belmont Derby would be something great to take a shot at, but this was just a hard spot not to take a chance with.”